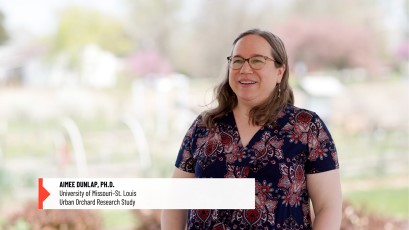 Associate Professor Aimee Dunlap has been working with researchers from six institutions around the St. Louis region to study pollination in urban orchards. The three-year project is funded by the U.S. Department of Agriculture’s National Institute of Food and Agriculture. (Screenshot)

Aimee Dunlap, an associate professor of biology at the University of Missouri–St. Louis, has been directing a project studying pollination in urban and suburban orchards with colleagues at six institutions across the St. Louis region since last fall.

STLMade, an initiative of Greater St. Louis Inc. spotlighting notable and innovative work being done in the region, featured the collaboration in a feature story and video headlined “Hive Mind” on its website last week. It was the first installment of a two-part series about the project.

The research dives into the role of bees in pollination with the goal of maximizing fruit production while supporting biodiversity, and it’s supported by a $633,000 grant from the U.S. Department of Agriculture’s National Institute of Food and Agriculture.

“I think that sometimes, when we think of animal behavior and we think about nature, we think about nature that’s far off,” Dunlap told STLMade. “It’s in Glacier National Park. It’s whales in the ocean. But right in your backyard is so much drama of what’s going on, just among the insects. A lot of times when we’re in our yards or we’re at a picnic, we see bees around. Those bees have fascinating lives. And we have so many different kinds of bees that all have different natural histories, like how they handle the winter, how they find mates, how they’re finding food, how they’re nesting. There’s such diversity here – when you dig into that, it is absolutely fabulous.”

Dunlap specializes in urban ecology and bee behavior, and she is a master gardener who volunteers with the 13th Street Community Garden in her Old North St. Louis neighborhood.

“Urban orchards are growing, and in St. Louis, we’re up to over 50 of them thanks to Seed St. Louis and Dean Gunderson,” Dunlap said in the video, referring to Seed St. Louis’ director of education. “But one aspect of those urban orchards – because they tend to be so small – is that the fruit production is great some years and poor other years. We’re really looking at ways of making that better – how are we going to maximize this fruit production?”

They aren’t just focusing on the pollinators but also on the plants as they study the role pollination plays in supporting a thriving ecosystem.

“We have experts and people that are tending to each single step of the entire pollination process, all the way from the emergence of a flower bud to the moment that you pick that apple or that fruit from the tree,” said Gerardo Camilo, a professor of biology at Saint Louis University who has done extensive research on the communities of bee pollinators present in St. Louis.