From very small to very large, the Echiums are beloved by bees.

Many beekeepers will be familiar with the Borage (Borago officinalis) or Starflower because it is a plant that bees love. There are many species in the related Echium genus, which is also in the Borage family (Boraginaceae), that are just as good, if not even better at attracting these honey-producing insects.

A common name for some of the most spectacular types of Echium is “Tower of Jewels,” and with good reason because of the massive flowering spikes the plants produce. Each “tower” is covered in thousands of tiny nectar-bearing flowers that bees simply cannot resist, and humans find these plants very attractive as well. If you grow a Tower of Jewels it will be a definite talking point. So many of our favorite pollinating insects can be attracted to an Echium plant that perhaps “Tower of Bees” would be just as appropriate as its name! 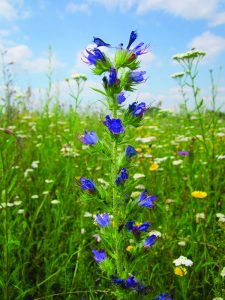 Incidentally, bugloss is another name for plants in this fascinating genus, after the type species, the Viper’s Bugloss (E. vulgare) or Blueweed. This species will grow happily in places with cold Winters, is found throughout Europe, and was introduced into North America and Canada. This is worth knowing because it illustrates the fact that there are species of Echium that can grow in a wide range o f temperatures and climates. You should be able to find the types suited to your garden, wherever you live.

Viper’s Bugloss gets its name because its small nut-like seeds were thought to resemble a snake’s head and its spotted stems were thought to look like snakeskin. It grows in waste ground, fields, grassy places and in sand dunes.

Viper’s Bugloss is a much smaller plant than any of the Tower of Jewels species but it has flowering spikes of pretty blue flowers, and like the other Echiums, it is a biennial. Because it produces plenty of pollen and nectar it is a flower the bees find irresistible.

But now let us take a look at some of the other Echium species we can grow in our gardens that will benefit our bees. 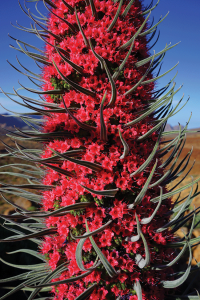 Echium wildpretii is one of the types often referred to as a “Towers of Jewels,” and is also commonly known as the Red Bugloss or Mt Teide Bugloss. The names are very apt because it has very tall flowering spikes of red flowers, and it is found growing naturally up on Mt Teide in Tenerife in the Canary Islands. The Red Bugloss, or “Taginaste Rojo,” as it is called in Spanish, is actually a very rare species in the wild because it is only found in this mountainous location and around the mountain village of Vilaflor. The Red Bugloss, which can reach around three m (10 ft) in height is often grown in gardens and parks, though it needs protection in areas where there is frost in Winter. Seeds of this species are easy to find in Internet searches, and it will grow successfully in many parts of North America. Red Bugloss grows best in the ground but can also be cultivated in pots and containers as long as these are big enough and well-drained. The Red Bugloss hates having wet feet! In its first year it produces a large rosette of leaves, which is followed in the spring of the following year by its flowering spike. It is well worth waiting for the second year of growth because the Red Bugloss definitely has the wow factor! 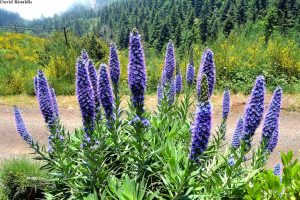 The Pride of Madeira (E. candicans) is another very aptly named plant because it comes from Madeira originally, and it is a flower the island can certainly be proud of! Although, not a “Tower of Jewels,” as such, this member of the Echium family grows into a very large bush that in Spring and early Summer produces flower spikes at the end of its branches. Each flower head is covered in tiny blue blooms with red stamens, and also covered in bees and other pollinating insects. The Pride of Madeira is widely available as an ornamental plant, and being drought-tolerant is especially suited to coastal gardens and parks, such as those in California, where it grows so well it has become regarded as an invasive species. 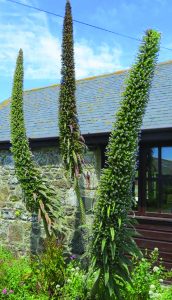 The Tree Echium (E.pininana), Pine Echium or Giant Viper’s Bugloss, is another very aptly named species too because it gets very tall indeed. Very much a Tower of Jewels, the Tree Echium reaches four m (13 ft) with a stoutly-stemmed inflorescence of small deep blue blooms. Sold as “Blue Steeple,” and easy to find by Googling for the seeds online, this plant will grow in many areas of the world besides its natural habitat in the mountainous forests of La Palma in the Canary Islands, and although it is a subtropical species it does very well in Ireland and many parts of the UK. In its first year, the Tree Echium grows as a rosette with a short stem bearing lance-shaped slightly hairy silvery-colored leaves. It is a biennial, and sometimes a triennial, which in its second or even third year, produces the tall Tower of Jewels of its name. Besides parts of the UK, this Giant Viper’s Bugloss will also grow in North America, including California, just like the Pride of Madeira. In its natural habitat the Tree Echium is now an endangered species due to habitat destruction, so growing it in our gardens is actually helping in the conservation of this amazing plant, as well as benefiting the bees. 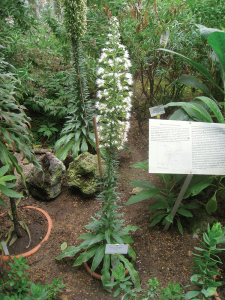 Echium simplex is a white-flowered Tower of Jewels that, like the Mt Teide Bugloss, comes from Tenerife. It is another very rare plant in the wild state and is mainly found in the cliffs and mountains of the Anaga Mountain range in the north of the island. It is a very attractive plant for gardens in warm temperate climates and can do well if given plenty of sunlight. Like many other Echiums it produces a rosette of leaves in its first year and then erupts with a glorious Tower of Jewels in the Spring of its second year. It grows to an approximate height of  anything from one to three m (three to 10 ft) and looks very impressive when in full bloom. It is a Tower of Jewels that provides us with a visual delight and at the same time delights our friends the honey bees!