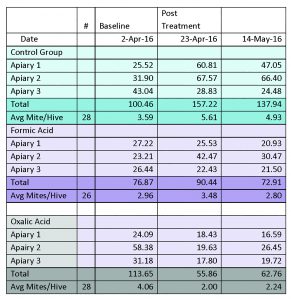 Two methods for treating Varroa mites (Varroa destructor) were tested during this study. One method of treatment was vaporized oxalic acid applied once per week for 3 weeks. This method did prove beneficial in reducing mite loads in honey bee (Apis mellifera) colonies.  The second method of treatment was the use of one formic acid pad, MiteAWay Quick Strip (MAQS).  The use of formic acid slightly reduced the mite load in the tested colonies. 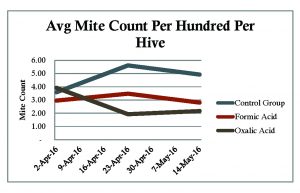 In an attempt to control variables and conditions to the extent possible, all three yards were located in Dooly County, Georgia on similar sites. The yards were within a radius of five miles and separated by at least two miles. As the study began each yard was experiencing a good nectar flow and had easy access to water. All hives were 10-frame, Langstroth hives with bottom screen boards. The yards and groups were balanced as to hive size and sun exposure.

Hives in the formic acid group were treated with MAQS by placing one strip inside the hive on frames containing brood where it remained for one week before being removed. The use of one strip per hive was a deviation from the maker’s recommended product use of two strips per hive. This approach to treatment was based on conversations with beekeeping professionals coupled with articles such as the one written by 2Robyn M. Underwood, and Robert W Currie appearing in the Journal of Economic Entomology by December 2005 where they conclude formic acid in “high concentrations can cause queen mortality.”

Hives in the oxalic acid group were treated in seven day increments for a total of three times by vaporizing two grams of product (1/4 tsp) into each hive in the group for three minutes. A commercial vaporizer was used in order to treat four hives at a time.

Samples were taken from each hive on April 2nd, before treatment had begun, on April 23rd, after completion of all treatments and on May 16th  (the third sampling). The samples were placed in an alcohol wash in jars labeled by hive and group. The resulting mite load per hundred was noted on the below graph and following spread sheet.

The results of the three samplings areas follows:

All hives experienced consistent colony growth and nectar collection during the course of this study.

The formic acid treatments (MAQS) were applied once and left on the hive for one week. The total mite count for the group increased from 76.8 mites to 90.4 mites from the first mite sampling to the second.  The third sampling showed the mites count decreased to 72.9 mites. This decrease might be due to the mite count already being fairly low at the beginning of the study. The experienced mite drop with this treatment was not consistent with expected results.  3R. W. Currie and P. Gatien 2006 said that “formic acid provided consistent control of V. destructor in spring applications,”

The application of MAQS strips only takes about two minutes per hive and another one minute to remove the strip the next week. However, the cost of formic acid using MAQS is significantly more than that of two grams of oxalic acid.

It is also worth noting that, even though the treatment used was one half of the manufacturer’s recommendation, this group experienced more hive loss than either of the other groups, suggesting that formic acid is a factor in queen mortality.

The oxalic acid treatment was applied for three weeks and resulted in a reduction in the mite count from 4.06 average mites per hive to 2.24 average mites per hive for the group. The reduction of mites is consistent with previous studies by  4Rademacher 2006.  The time required to treat each hive with oxalic acid is greater than with MAQS.  The oxalic acid application takes approximately seven plus minutes for four hives. Although the cost of the actual oxalic acid is minimal per hive, the application apparatus requires a significant investment of approximately $600.00 for the 4 vaporizers.

Two conclusions can be drawn from this study:

The oxalic acid applied 3 weeks in a row is an effective treatment for reducing mite load. The hives treated with oxalic acid saw a significant drop in mite count.

The formic acid treatment was not dramatically effective as a mite treatment at the dosage of one strip at this time of the year. An additional study would be needed during the heat of the summer month at this same dosage, which could show improved results because of the heat increasing the speed of the formic acid release. At lower temperatures such as experienced during this testing period two strips may have improved the mite drop.

This research paper was in partial fulfillment of the requirements for the Master Level Beekeeping Course, University of Montana, with Jerry Bromenshenk Ph.D. Thanks to Jennifer Berry, UGA, my wife Bonita, and Jerry Phillips for their meticulous fieldwork.