The son of Czechoslovakian immigrants, Charles Mraz (1905-1999) kept bees in Woodside, Queens, an enclave of Czech immigrants in New York City during the early 20th century. He started working for other beekeepers and finally bought a beekeeping business from a beekeeper named Phil Crane in Middlebury, Vermont. Charles had worked summers for Mr. Crane, and moved to Middlebury permanently in 1928 to buy the operation when Crane retired. Three years later (1931), he renamed the business Champlain Valley Apiaries (CVA), which is the name the business carries to this day. In the mid 1940s, he moved the business to its current location: a nondescript, three-story building on Washington Street Extension in Middleburg.

Charles went on to become a world famous beekeeper. He developed a pick uncapping machine (a variation of an older machine), invented the fume board for removing bees from honey supers at harvest time, and collaborated with Alan Benton of Vespa Labs, the man who is credited with developing the first bee venom extractor/collector.

He traveled extensively to South and Central America, Europe, Asia and the Middle East consulting with beekeepers on beekeeping methods and technologies. In 1992 the American Beekeeping Federation recognized Charles as one of the five most distinguished beekeepers in the United States for his advances in commercial beekeeping. Charles wrote regularly for Gleanings In Bee Culture and the American Bee Journal. Charles is perhaps most famous however for his work in apitherapy, the therapeutic use of bee products. Most notably he spent over 60 years treating people with bee stings for relief from arthritis and worked tirelessly to try to get the medical establishment to recognize the potential healing benefits of bee venom therapy (BVT). He went on to treat people with multiple sclerosis and other autoimmune diseases with BVT, as well as help found the American Apitherapy Society that to this day continues to act as a clearing house for information on the use of bee products for healing and health. He published Health and the Honey Bee in 1994, recounting his years working with bee venom in the treatment of many degenerative diseases that modern medicine has so far been unable to effectively cure. 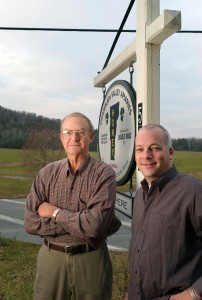 Around 1976, Charles’s son William (Bill) Mraz, began the transition of taking over the business. Bill, the younger of two sons, is a mechanical engineer. Over the years Bill juggled two jobs and eventually transitioned to CVA fulltime. Over the years Bill rebuilt and made improvements to the venom collector, built a new wax separator that was a lot smaller than the old Cook & Beal’s and didn’t require the heating of the honey, and invented a reversing jig that raised the hive off the ground and provided an easy way to catch the burr comb scrapings when reversing bees.

Unfortunately, Bill’s taking over the helm of the company coincided with the tracheal mite’s arrival in Vermont and CVA winter losses jumped from 5-10 percent in a bad year to around 30 percent. After suffering large initial losses, Bill got the beekeeping operation on an even keel just in time for the Varroa mite invasion at which time losses jumped back up to 30-40 percent.

It was around 2004-2005 that Bill’s son, Charles (Chas) Mraz, transitioned into running the business. Chas had been a construction supervisor in New York City but was familiar with the bees having grown up around them. As Chas tells it, “It was a big transition, a big change. I’d be running jobs with over 100 guys working and I liked the camaraderie of that. It was fun, and I made a lot of friends. Now I’m usually working with just one or two people throughout the year, along with a few million bees. But I think it wasn’t a hard transition for me because I knew what it was, having grown up in Vermont, coming home was not a difficult transition even though I lived in the big city for 17 years or so. I don’t really ever remember disliking working bees. I think it was just a part of what we did. Being a Mraz, it wasn’t really a question of whether you were going to work bees at some point in your life. It was kind of a given.”

Bill had built the business up to around 1200 colonies, and CVA lost approximately 45 percent of their bees the Winter of 2004 and Chas came on board that Spring. “It was a wild start but my father and I worked side by side to build our numbers back up,” he says. The numbers have been up and down ever since. Chas has moved away from using synthetic miticides like Apistan and Checkmite+, and today relies on formic acid and ApiGuard instead. Like his father, Chas does not treat for Nosema, but rather breeds from his survivor stock in order to build natural resistance to the disease throughout his operation.

Another practice that Chas has carried on from his father and grandfather, which is different from most operations their size is to winter the bees on honey. “Back in the 50s Charlie would do what everybody did, take the honey and feed back sugar syrup,” explains Chas. “One year Winter came very quickly and they only had a chance to feed half the bees. They were taking the supers off and feeding, and had gotten through about half the hives, when snow fell and temperatures dropped and Charlie said ‘Well, we can’t feed them, its gotten too cold so we’ll just leave a super of honey on that half of the operation,’ and the next Spring, that half of the operation was just boiling out of the hives and the other half was not. So he said, ‘…well if this is the result, we are going to leave honey on all of them from now on.’” Chas goes on to explain, “We probably leave about $80 of extractable honey on every bee hive and it is expensive, but we’re not buying syrup and we’re not going back to the yard and investing in the labor to feed them, or wash the feeders afterwards, which we don’t have time for anyway. There is a definite payoff. That honey is valuable, but I think it is more valuable for the bees.” 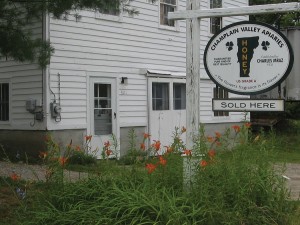 Champlain Valley Apiaries honey house and shop. The image on the sign of the state of Vermont and clover leaves has been consistently used on the CVA honey label for over 80 years.

Despite his best efforts, Chas recognizes that the bees don’t have the kind of vitality that they used to have. “We moved to Middlebury when I was 12, but before that we lived in Georgia, Vermont,” says Chas. “My father always had bees in Georgia. I can’t remember if I went out and worked with the bees with him (Bill) or not, I probably did when I was a kid, but we always had bees there and in fact my father said one beehive was there for 25 years just continuously, re-queening itself and just going on and on like many of them used to do.” 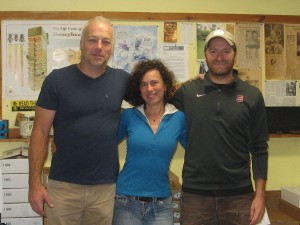 Today, Champlain Valley Apiaries is primarily a three person operation. Chas has two full time employees, Head Beekeeper Levi Doria, and Shop Manager, Cee Denney. They also have a part-time bookkeeper, and will hire additional part-time beekeeping help during the Summer months, and part-time office help to assist with the rush of orders that come in, leading up to and during the holiday season. And then of course there’s Bill, who Chas refers to as his “resident mechanical engineer,” which Bill explains simply means that he primarily gets called to come into the shop when something breaks and needs fixing.

Over the years Chas has worked to build up the business side of things, revamping their print catalog, setting up a small store in the honey house on Washington Street Extension, and creating an on-line store. Today, Champlain Valley Apiaries supplies its customers with honey, beeswax, candles, books and related honey bee products, as well as, honey bee venom and a small amount of apple pollination in spring. CVA honey is a blend of premium honey from the U.S., Canada, and the Champlain Valley of Vermont. This allows them to keep the flavor of the honey consistent.

Chas has worked to make each branch of the business (production, packing, bee venom) independent and profitable. The most challenging area has been the bee venom side of the business, Pharmaceutical compliance is extremely stringent and sales are unreliable and irregular. Pharmaceutical companies use the venom primarily for creating the desensitization shots doctors provide to folks who are hyper allergic to bee venom. 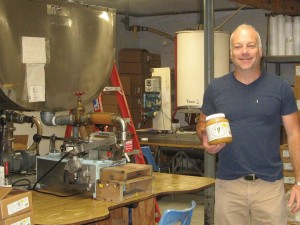 Chas Mraz poses for a photo in the honey bottling area. CVA runs two
bottling lines, one for liquid honey and a second for their naturally
crystallized honey.

CVA sells mostly to wholesale accounts but they do quite a lot of retail business, especially around the holidays, through their print catalog, their online catalog. By far the best seller is their crystallized honey. “We have a tremendous product. A strong brand and a great quality product in our naturally crystallized, raw honey,” explains Chas.

Chas developed a strong work ethic early in life. “I’ve been working since I was 10,” Chas goes on to say, “In my family we didn’t get an allowance. My allowance was if you mowed the lawn, you were allowed to use the mower to mow other people’s lawns for pay. My father instilled in all of us a real work ethic.” Chas’ beekeeping work extends outside of the everyday business concerns of running CVA. He served for three years as the President of the Vermont Beekeeper’s Association, and currently he is working with faculty at the University of Vermont to develop ways for farmers to improve the amount of pollinator friendly forage on their farms as a way to bolster pollinator health, while improving farm income at the same time. His latest project is to work with Vermont Public Television on a documentary focusing on the impacts neonicotinoid pesticides are having on bees.

2016 will be Champlain Valley Apiaries 85th year in business and Chas reflects on the many changes he’s seen over the years.. “The farmers certainly cut hay more aggressively than they used to and they have the machinery to do it. They didn’t have the machinery when I was a kid to cut hay like they do now. But perhaps the biggest change is all the extra work that comes with the diseases and varroa mites, that’s really the most significant thing that has changed…the problems.” According to Chas, “We used to have a problem come along every 10, 15, 20 years or so, there would be a new bee problem. Now it seems like every few years there’s a new issue and it is a lot more expensive to keep bees today. There are more operations to do with the treatments and we spend more time checking the hives. It’s always been hard work but there just seems to be a lot more activities and a lot more to do these days.”

Despite the modern challenges, Chas explains he is not about to give up beekeeping… “I enjoy working bees. I enjoy having my office outside of a building. My father says it’s a lot of hard work and bee stings. While I like to romanticize it a little more than that, some days it is just hard work and bee stings. And it’s tough. You can feel great one day and absolutely down the next. But I’m really comfortable with the bees and I like being a steward of the bees. I think that I would miss them dearly if I didn’t work them. I just couldn’t imagine that happening, that I wouldn’t have bees.”

Disclosure: While Ross Conrad is the author of Natural Beekeeping, he got his start in beekeeping working for Bill and Charlie Mraz from 1992-1998.