How important is hive insulation really?
By: Ross Conrad

This is the time of year when beekeepers throughout North America start preparing their colonies for Winter. Many beekeepers believe that bee hives should be insulated during Winter. The thinking is that the bees need help retaining heat inside the hive in order to survive the cold since wild bees that survive harsh Winters are often found in hollow trees with thick walls that provide more insulation than our typically thin-walled bee hives. This all sounds reasonable as long as you don’t consider the issue too closely. First, let’s take a look at how the bees prepare for Winter.
Unlike solitary native bees that hibernate, the Western or European honey bee (Apis mellifera) has evolved to be able to thermoregulate the hive interior in order to survive extreme cold weather. Research has demonstrated that a honey bee cluster must maintain a temperature within a range of about 90°F-97°F (32°C-36°C) to ensure brood survival (Heinrich 1981). Just like humans, during extreme cold temperatures honey bees rely on several heating strategies to thermoregulate their dwellings at the optimum temperature.

Efficiency first
Our heating bills can be greatly reduced with the well-placed application of caulk or weather stripping around windows, doors, plumbing pipes and other cracks in a building’s envelope where air leaks through. For larger gaps we often use spray foam insulation. Weatherizing a home for optimum efficiency provides the biggest bang for the buck when it comes to cold weather comfort. In a similar manner, bees will gather the resins from deciduous trees (e.g. cottonwood, poplar, birch and beech) and form it into propolis. The propolis is used it to plug up cracks and holes where air and light passes into and out of the nest cavity. This often includes adding propolis around the entrance to reduce the size of the opening to cut down on drafts and make it easier to defend.

Insulation on-demand
To most effectively conserve heat and maintain the brood nest temperature, bees will start to cluster around the brood area when the ambient temperature drops down to around 57°F (14°C). They position themselves in layers with the outside layer of bees oriented inward toward the middle of the cluster. This outer layer of bees will clump together tightly locking their legs forming a mantle-like shell surrounding the queen and the rest of the bees that are located in the interior of the cluster. Acting like the insulation layer of a building envelope, the mantle of bees retains the heat produced by the heater bees. In addition, the body hairs of the mantle bees interlock with their neighbors helping to trap the heat produced within the cluster enhancing the efficiency of the insulating effect.

Fueling heat generation
The center of the cluster is the warmest and safest area where the queen lays eggs and maintains the brood nest. Within and around the brood nest are heater bees. Just as we stack up our cordwood or have our fuel tank filled during the warm season so we can burn the fuel and produce heat in Winter, bees gather nectar during the Summer, store it as honey and burn these carbohydrate calories during Winter to help fuel heat generation. Heater bees generate body heat by flexing their thoracic flight muscles (endothermic heating) much like the human body will create heat by shivering. Along with heater bees there may be fanning bees that help to move the warm air around depending on the temperature and how tight the cluster is.

Ventilation and temperature control
The bees maintain porous air channels to help regulate the warmth, humidity and CO2 levels within the cluster. When temperatures drop further, the cluster will contract, becoming tighter and more compact. This action will close up unneeded porous ventilation channels. 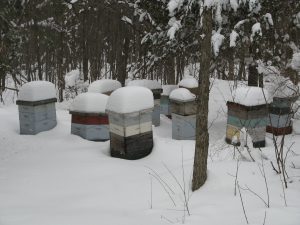 A healthy colony that stays dry and has access to plenty of honey does not need a well insulated hive in order to thrive. Bees have been
insulating their Winter cluster long before beekeepers came along.

Thus, the honey bee provides an excellent example of what we all should do during Winter, get together with those closest to us and snuggle. They also are smart about how they heat their home by focusing the energy demands of heating only in the area they are occupying rather than trying and keep the entire interior of their hive cavity warm. This mimics how one might maintain comfortable temperatures in a home with a heating ventilation and air conditioning (HVAC) system designed with zones that minimize heat in areas such as utility rooms and other places that have lower temperature requirements than the rest of the building.
The center of the Winter cluster serves as the central heating system for the colony. Worker bees take turns performing endothermic heating, fanning and serving as mantle bees rotating in and out of the various roles. Human beings utilize a centralized control system such as a thermostat that monitors the room temperature and turns on the heat when the temperature drops below a certain level. Unlike us humans that tend to rely on a centralized control-system, the bees employ a decentralized control system. This decentralized system relies on each honey bee’s individual assessment of what is needed (heating, fanning, shielding) based on the immediate local temperature and humidity. Unlike humans, bees do not rely on a single temperature point to respond, but utilize the experience of multiple and redundant individual bee’s which allows for rapid resolution of any disturbance or change to in-hive environmental conditions. This means that increased genetic diversity in a queen’s offspring through high levels of multiple mating creates more stable brood nest temperatures. Diverse colonies sired by numerous males increases the genetically determined diversity in worker bee’s temperature response thresholds. This modulates the hive-ventilating behavior of individual workers, helping to prevent extreme colony-level responses to temperature swings (Jones et. al. 2004).

Hive insulation
Now let’s get back to the question of how important beekeeper applied hive insulation really is.
While not easy to pin down precisely, it appears that softwoods such as pine have an insulation value of R-1.00 to 1.25 per inch (USDA 2007). While some equipment manufacturers make a big deal out of the extra insulating value of the thicker lumber they use to make their hive bodies, the thermal difference between a ¾-inch thick board used to manufacture most modern hives and thicker lumber is so minimal that insulation claims are more marketing hype than potential benefit to the bees. Other equipment manufacturers and suppliers provide equipment made from Styrofoam, or offer insulating blankets for wrapping hives in Winter. These products provide significant extra insulating value and can have a noticeable impact on the temperature of the hive’s interior. I won’t deny that under some unique circumstances such increased hive insulation may be beneficial, but the reality is that it is much more likely that beekeeper efforts to super insulate hives are more harmful than helpful.
Since there is always an entrance opening that allows cold air to enter the hive, the interior of a hive surrounding the cluster will eventually grow cold during long stretches of low temperature weather. However, as long as a colony is healthy with a large population of bees, stays dry and has access to fuel (honey), the bees are able to compensate for the cold by thermoregulating the interior of the cluster as described above. Hive insulation only acts to slow down how quickly the ambient interior temperature around the cluster of the hive will cool down.
Unfortunately this also works in reverse. When there is a Winter thaw and temperatures increase during the day, the temperature modulating effect of hive insulation slows down the speed with which the interior warms up allowing the bees to break their cluster and go on important cleansing flights. Unlike the decentralized insulation created by the mantle bees in the cluster, beekeeper applied insulation does not respond to rapid and dramatic temperature shifts and can be detrimental for overwintering bees. Heavily insulated hives can also delay a colonies population growth in Spring.
In warm climates where Winter temperatures are not so extreme and ambient temperatures surrounding the cluster inside the hive do not get excessively low, hive insulation may not create much of a problem, but then the insulation is also not really needed. Unfortunately, in northern climates where one would assume that increased hive insulation would be most beneficial and temperature extremes swing widely and sometimes rapidly, the delay in hive warming during a Winter thaw can prove devastating to a colony. 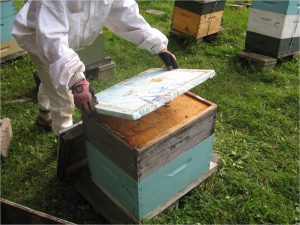 Hive insulation above the inner cover can help keep a colony from getting wet during a Winter thaw. Materials such as straw and burlap will absorb some of the moisture above the cluster, while rigid foam insulation simply prevents the water from freezing, allowing the moisture to be vented from the hive, provided there is adequate air flow.

So is insulation a necessary hive component for Winter? I would argue that except perhaps in some unique circumstances, the answer most of the time is no. Just make sure the three primary factors are met. 1) The bees are healthy with a large population. This means that mites are under control and disease issues are not a factor. 2) Colonies should be heavy with plenty of honey. There should not be a lot of unused empty space, undrawn foundation or empty combs in the hive and the honey stores should be concentrated primarily in an area of the hive that the bees will be able to access easily. 3) The bees are able to stay dry. Not only does this mean that the hive covers are secured so they will not accidentally come off, but condensation that naturally builds up in the hive will not freeze above the cluster only to drip down on the bees during a thaw. As I have outlined in the book Natural Beekeeping, pay attention to these three factors and the bees will be able to keep themselves warm and comfortable all Winter. After seeing thousands of colonies housed in standard Langstroth hives with no extra hive insulation successfully over-winter in Vermont, despite temperatures that can get down to 15°F to 20°F below zero (-26°C to -29°C) during Winter, it has convinced me that the effort spent super insulating hives is probably a waste of time, money and resources.

Ross Conrad is the author of Natural Beekeeping: Revised and Expanded 2nd Edition, and The Land of Milk and Honey: A history of beekeeping in Vermont.