Summer management in the southeast, such as South Carolina, usually starts in June and continues through September.

By the end of May, and no later than the first week of June, the Spring nectar flow is over with most hobbyist beekeepers preparing for a Summer dearth lasting from mid-June through mid-August.  Beekeepers located close to a planted crop such as cotton or soybeans get some nectar flows in late Summer.

During the transition into Summer the queen begins reducing her egg laying while Varroa mites continue to increase in population. With the reduction in egg laying, there is less brood for the mites to reproduce in resulting in a higher percent of capped brood containing mites. Additionally, more mites are on the bees (phoretic mites) during this time. Now is the time to do a mite count (alcohol wash, etc.) and treat if necessary. I normally treat for Varroa sometimes between the middle to the end of May in South Carolina with Thymol which allows splitting the colonies mid-June. The beekeeper should continually monitor their mite levels throughout the year. Honey supers should have been removed prior to treating. With the end of the major nectar flow no later than the first week of June, any remaining incoming nectar from the Spring flow will be stored in the food and brood chambers thus not presenting an issue tainting honey for human consumption.

The number of bees in colonies remains high in mid-June.   Adequate drones and good weather is suitable for making increases. I split my colonies and marry the split with a mated local queen. Whenever mated queens are available, I use mated queens rather than doing a walk-away split where you let the bees raise their own queen from young larvae.  Using mated queens supports the split by minimally interrupting the population age dynamics and gives them adequate time to build a healthy population before the Fall nectar flow and Winter. I feed sugar syrup (1:1) when making these Summer splits to provide the one thing nature has taken away – liquid carbohydrates. This ensures the splits have enough food. Feeding pollen substitute should also be considered as some areas have pollen dearth’s as well during late Summer.

Splitting in June is easy and usually very successful. Splitting during this time frame will help build your colony numbers and offset losses due to Varroa and other maladies. Using drawn comb is greatly preferred as it is sometimes difficult to stimulate wax production and comb building by increased syrup feeding alone during a dearth.  Feeding the split 1:1 sugar syrup is recommended as is pollen substitute. Dry pollen substitute in containers on their sides such that water cannot get in is recommended. Small Hive Beetle populations can be high this time of year and often multiply when pollen patties are used unless the patties are very small and placed directly above the brood nest.

Splits should be made no later than August and married with a mated queen (local if available). In my area mated queens are typically available until August and often their prices may be dropping.  Splitting in August will allow time for the split to build-up prior to Winter. It takes about a week or so for a mated queen to really start laying and another three weeks for her first workers to emerge. So, that puts workers emerging from the new queen in mid-September to first of October. This will allow about another month, until October, for the colony to build-up provided the beekeeper provides supportive measures.

Splitting during the Summer, after the nectar flow, should be considered regardless of future intensions to split the following March in the Southeast. The rationale is when you split in March, mated queens are typically difficult to obtain and you have to do a walk-away split which impacts your honey yield that year whereas splits done after the nectar flow the previous year come into Spring building and ready for production of bees and honey.

When feeding sugar syrup in the southeast in the Summer, the syrup should be checked at least weekly for fermentation. Syrup fermentation is an issue with the high temperatures during the day and night. Any colony that goes “off their feed” should be investigated for issues with the feed or the colony.

If the beekeeper can catch a planted crop during the Summer, such as cotton or soybean, it will assist in honey yield, building up the splits, and ensuring the colonies have enough stores to get them through the Winter. Cotton and soybean does not yield nectar in all locations depending on the weather, soil, and plant variety. However, often even if the crop does not yield nectar, there is a pollen flow from the crop, allowing the colonies to build up if supplemented with 1:1 sugar syrup to replace a negligible nectar flow.

Mid-Summer is the time to consider crop pollination. This will bring in much needed revenue. The beekeeper may have to move their hives to pollinate crops or catch another nectar flow. If you are a honey producer, travelling to a mid-Summer nectar flow such as sourwood, cotton, or soybean can be beneficial. You will need to analyze if the quantity of nectar from the flow and reliability of the flow is financially worth moving the colonies. In addition, the beekeeper needs to determine if any pollination rental fees will cover moving costs and provide a reasonable profit. An agreement needs to be made with the farmer to notify of pesticide, fungicide, or other sprayings. Finally, depending on the crop, such as cucurbits, the bees may have to be fed since the colonies may lose weight. This necessitates another yard visit, with trip expenses as well as feed costs being included in the pollination fees.

Varroa mite numbers should be checked early in August when the Winter nurse bees are beginning to emerge in addition to throughout the year. If high, the colonies should be treated. “Mite bombs” from dead-outs and other colonies should also be considered when counting Varroa mite numbers. It normally takes two to three months for a colony to succumb to Varroa mites if not treated in the Summer and Autumn. This means if the colonies are treated in June, they should be checked again in August and also in October or November. 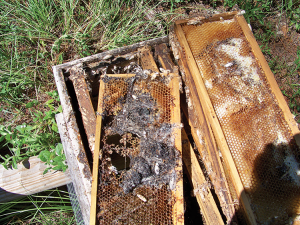 For Wax Moths, temperatures between 5°C (41°F) and 18°C (64.4°F) results in no developmental activity. Wax Moth eggs are not able to hatch at temperatures below 18°C (64.4°F)1 Hence, when the temperature cools to below about 64°F, the beekeeper has less worries about Wax Moth damage. Below 41°F (5°C) wax moth larvae are completely dormant.

This means wax moths are an issue in most of the southeast during the Summer. Your best defense against wax moths is a strong colony. A strong colony can be defined as a colony strong enough to defend the volume of its hive. For some colonies that may mean multiple 10-frame Langstroth hive bodies; for weaker colonies it might mean a five-frame nucleus hive with a one bee space entrance reducer. The beekeeper should be mindful of matching colony population to the appropriate amount of hive space they must defend.

Beekeepers need to be mindful to protect the comb acquired from colony dead-outs if at all possible. The combs can be frozen or let light and air access the frames which inhibits wax moth development. Another option is use of paradichlorobenzene if you plan on stacking or storing hive bodies of drawn comb.  If the comb is left in a closed hive, wax moth damage will occur especially on the dark comb where brood has been raised resulting in the loss of the bees’ legacy and the beekeeper’s greatest asset – drawn comb. 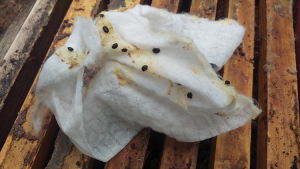 Small Hive beetles can become an issue. Like wax moths, a strong colony is the best defense for small hive beetles. If the colony has more than 15 to 20 small hive beetles, then a beetle trap (Cutt’s beetle blaster) or dry, unscented “swiffer” pads may be appropriate. If “swiffer” pads are used, be careful if you have a lot of propolis on the inner cover. The pads are normally placed between the top box and the inner cover. If there is a lot of propolis on the bottom of the inner cover or on top of the super frames the pads will stick to the inner cover resulting in the inner cover being difficult to remove. Small Hive Beetles will normally get their legs tangled in the fibrous pad while the bees will not. If the colonies are moved often, Small Hive Beetles are less of an issue since when they pupate in the soil they will not re-infest the colony.

Colonies in full sun, especially in the morning through mid-afternoon, may also inhibit SHBs.

Summer management in the southeast takes some planning. Usually it takes more than the Spring nectar flow to be profitable unless you simply wish to have a couple of hives in your backyard.  Either selling nucleus hives in the spring or another flow or pollination is necessary. After the Spring nectar flow is over, and the colonies are split, a decision needs to be made if you are going to catch another nectar flow or secure pollination contracts. The cost and revenue numbers need to be analyzed to determine if another flow or pollination is profitable and deciding on the best way to proceed.