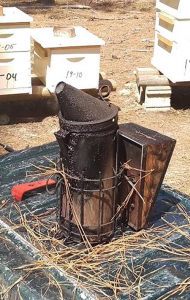 Smoker size and the fuel used can have an impact on the beekeeper’s satisfaction. Large smokers are generally easier to light and stay lit for a longer period of time. Smokers with a finger guard are more comfortable to use. The type of fuel you use also impacts the smoker’s ability to stay lit.

There are at least two schools of thought as to why smoke works to calm bees. One school of thought is it interferes with the bees’ senses and masks alarm pheromones released by guard bees. This is most likely the primary reason smoke works. However, the other school of thought is it makes the bees believe there is a fire and their colony are in danger. This results in the bees gorging themselves filling their honey stomachs. This makes it more difficult for the bees to sting since their honey stomach is full. This is why it is recommended to smoke the hive entrance and wait a few seconds to minutes prior to opening the hive.

The beekeeper may also consider smoking their hands if they do not wear gloves to mask scents. Smoking your hands helps helps mask odors from other bees, food or sweat. Also, smoking a sting will help mask the bee’s alarm scent and minimize further stings. 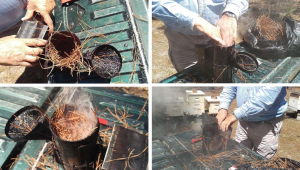 Lighting. Start at the bottom using pine needles, newspaper or other non-toxic flamable fuel. Once burning well, add small amounts of fuel, puffing to ignite, while adding more fuel. When bottom third is full and burning well, puffing. Pack the rest in firmly, use your fist, puffing. Keep puffing until lots of cool, white smoke comes out.

Smoking the frame ends moves the bees so you can pick up the frame with your hands. When smoking, you only need a puff or two from a well-lit smoker to control the bees. If you smoke too much, the bees may get upset. After working a few colonies, you should start getting a sense of how much to smoke by listening and watching the bees. Watching the bees is how you learn what a normal colony does in response to smoke.

The size of your smoker should match the number of colonies you are going to work. A good quality smoker will cost $35 to about $45. A 4-inch in diameter by 7-inch-tall smoker (4×7) is good for five to ten colonies in the same yard before inserting more fuel. A shield is nice to keep the beekeeper’s fingers from touching the hot smoker canister and reduces burning potential. A 4-inch in diameter by 10 inches tall smoker (4×10) is recommended for over ten colonies or colonies in several outyards. Again, a heat/ finger shield is recommended. Smokers today are made out of stainless steel which prolongs the smoker’s life rather than tin or galvanized steel as was used in the past.

A 4×10 inch smoker will last two to three hours if packed correctly. The fire should be started and coals established prior to packing the canister tightly with fuel. The smoker should be lit from the bottom. I use pine needles and pack the canister with as many pine needles as I can stuff into the canister. I live in the Columbia, South Carolina area and I can pick up pine needles for free. Be careful of leaves such as poison ivy. 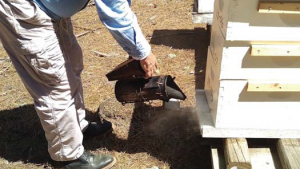 One, maybe two puffs in front door before opening.

A metal smoker box is recommended to transport the smoker from one beeyard to another or to place the smoker into after use. A metal smoker box may be purchased from a bee supply company, or it may be something as simple as an old correct size ammo box. When finished using the smoker, the nozzle hole should be closed with a cork, rag, or other material to put the fire in the smoker out. This will allow coals to be available for quickly lighting the smoker the next time.

If you do not close the smoker nozzle after placing your smoker in a metal box, if packed correctly, it will still be smoking for use later. However, if the smoker is not going to be used soon, the smoker nozzle hole should be stuffed closed with a cork, rag, or other material. This will keep creosote from building up if using pine needles and save some coals for later use. Rather than stuffing the nozzle, a smoker can be laid on its side, cutting off the draft, allowing the fire to extinguish. No air, no fire. 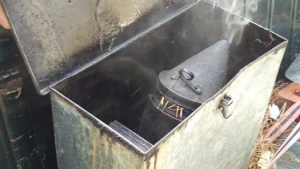 There are a variety of smoker fuels. You want to use something all natural, without grease/oil, pesticides or preservatives. Pine needles, punk wood (rotten wood) from cherry, hickory or other hardwood, wood shavings, burlap all work well. Some beekeepers even use dried grass/hay. Smoker fuels are often available from bee supply companies. Don’t use starter fueld, gasoline or other flamable liquids. Creosote buildup will occur with pine needles and other wood products with resin.

Creosote buildup can be burned to ash with a propane torch and removed with a hive tool or chisel. 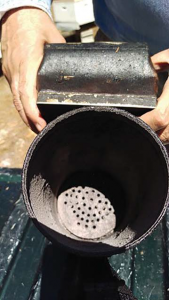 Make sure fuel below grate is removed.

“Frank Eischen with USDA’s Agricultural Research Service in Weslaco, Texas, has tested smoke from 40 different plants to control varroa mites. The most promising are dried grapefruit leaves and creosote bush, a woody perennial. Creosote bush smoke drove 90 to 100 percent of the mites off bees after a one-minute cage test. Grapefruit leaf smoke drove off 90 to 95 percent of the mites in 30 seconds. The findings are preliminary: more research is needed before scientists recommend that beekeepers use these plant smokes to control mites.” It should be noted that Creosote and Grapefruit may be harsh on your bees like tobacco was found to be.

A properly lit smoker makes working bees easier and more enjoyable. Lighting the smoker from the bottom, establishing a well-lit coal base, and stuffing the smoker’s canister tightly with fuel is the key to maintaining a welllit smoker, emitting plenty of cool, white smoke. Only a puff or two is typically required to control the bees from a well-lit smoker.