In Search Of The Better Beehive

When people start looking for a place to live – a home to own – they generally have a good idea what their needs are. And they know their wants – some special things to make it their dream home. The needs and wants are highly variable, even different in different climates. And frequently the needs of a perfect place to live come before considering the wants. However, many homeowners are enthusiastic do-it-yourselfers. After a few weekends a want leads to a new patio. After that perhaps a garden shed. The DIY projects are endless. Build bookshelves, reconfigure a closet, turn a bedroom into an office and perhaps build a beehive.

What do European stock honey bees in search of a home look for? A dry cavity. That is top priority on the need list. (Sometimes it can’t be found.) What about the wants? Well, the preferred size is 40 liters, making a deep Langstroth hive body just right. Close to that size is acceptable. Next, a definite need is a small entrance that can be easily defended. The bees would like the cavity placed not too close to the ground. The bees, industrious do-it-yourselfers, will take care of building their own furniture (comb).

What does the beekeeper want? A hive (the bees’ dry cavity) that makes it easy to accomplish the beekeeper’s goals. Is it honey production? Then definitely the hive itself and its parts should be easily movable, whether in beeyard or for traveling to lush nectar forage. What about pollination income? Basically the same as for honey production. Perhaps the beekeeper wishes to be a hobby beekeeper or be a protector of honey bees. Since these hives will not be moved from place to place, then any sort of hive that will be convenient is acceptable.

Looking back through the history of manmade beehives is quite fun. In places where trees were scarce, mud was easily shaped into cylinders. Plugs to cap both ends could be made of reeds. These supplied a small entrance for the bees at one end. At the other end the reed plug could be removed for access to the combs with honey. The clay cylinders provided the dry cavity and small entrance but when stacked probably made it difficult for the bees to distinguish their own cylinder.

In areas with plentiful trees, such as in parts of Europe and also in the United States, a beekeeper could ‘own’ a tree with bees in it, marked so that other beekeepers knew it was owned. At one point it seemed much easier to just cut down the tree, saw out the part with bees and take it home. Now the hive was much more convenient for the beekeeper. The bees had their selected dry cavity with a small, defensible entrance. However it was now much closer to the ground. The beekeeper could remove the slab of wood put on top of the log and harvest the combs for honey and wax. 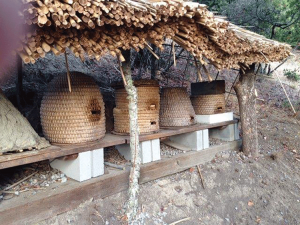 The skep, a familiar symbol of bees and beekeeping, was common in those parts of Europe that did not have dense forests with hollow trees. Skeps were essentially a basket turned upside down. They were certainly easy to make and were lightweight. They did provide a cavity but needed protection for it to be a dry cavity. The small entrance was not a problem. However its placement varied. Some entrances were at the bottom, others anywhere on the side. The basket shape, size and weight were certainly convenient for the beekeeper.

The cavity was a bit small but swarming was an important part of skep beekeeping. Destruct harvest was the common method of harvesting honey and beeswax. The bees were simply killed. Therefore, half the hives were harvested. The other half swarmed and the beekeeper would hope to capture the swarm in an overturned skep. Since bits of beeswax remained after the destruct harvest, the skep would smell suitable as a home for the captured swarm.

Skep beekeepers were creative. Actually all beekeepers are creative. Although the simple skep shape was popular, beekeepers discovered ways to improve it. Since honey and wax were the desired products, various types of “honey supers” were added. The domed skep was changed to a more cylindrical shape and a cylindrical honey super could be put on top of the lower part that had the brood. Thus honey harvest became much easier for the beekeeper. It also saved the bees.

A great burst of creativity occurred during the latter 1600s, through all the 1700s and into the first half of the 1800s. During those many years, beekeepers created hives of countless sizes, shapes and configurations both external and internal. Wood was plentiful and woodworking tools for carpenters and cabinetmakers were excellent. In the early part of the 1800s some beehives resembled houses with doors, turrets, passageways, and even little drawers. Some parts were supposed to be used to feed the bees if necessary; other parts were designed for honey storage and harvest. Some hives had windows for observing the bees. These usually came with a removable cover so the bees could continue to work in the dark.

What did the honey bees think? The hives were certainly a well-made dry cavity. The bees could build comb as they chose and plug up useless spaces with propolis. Entrances were small but could be anywhere. Certainly many of the hive inventions turned out to be completely impractical for the beekeeper as well as the bees themselves.

Hives, as boxes with frames, did occur during this time but since bee space had not been discovered, the beekeeper was hampered in any sort of management or harvesting. Langstroth’s discovery of that magic space led to hives useful both for the bees and the beekeeper. But invention of hives did not cease. Drawings of Langstroth’s actual hive show us that the world’s Langstroth hive today is quite different. It is much more convenient for the beekeeper yet provides the dry cavity of appropriate size with small entrance for the bees.

Hive inventions continued after the mid 1800s but at a much slower pace. At one time the British had six different styles of hives, some of which had interchangeable parts. Now there are two but one, the National, is by far the most popular. The Warré hive appeared in the early 1900s in France but remained in the background of beekeeping for a very long time. Wood has remained the primary material for hive construction.

As the world entered the age of plastic in its many forms, plastic also entered the world of beekeeping. In the U.S. during the late 1970s and early 1980s fiberglass hives were sold. Here was a material that would outlast wood, never needed painting and withstood hard use. Beekeepers, eager to use something new, tried these hives. They turned out to be unfit for both bees and the beekeeper. The hive bodies were translucent, admitting enough light through the sides that the bees simply avoided using the outer frames at all and only partially used the ends of frames. The brood nest and honey storage area simply became smaller.  The parts warped out of shape so that you could not put on or remove the telescoping cover without using a hammer.

Today plastic hives and hive parts are common. The lightweight polystyrene Langstroth hives are being sold. Plastic foundation and frame-foundation is common. Plastic feeders come in different styles. Beekeepers can buy sturdy plastic hive stands. In Great Britain the Beehaus by the Omlet company is a small plastic long hive that is suitable for urban rooftop beekeeping as well as backyards. The FLOW® honey super frames are plastic. Beekeepers are accustomed to plastics in their own lives so beekeeping with plastic parts can seem quite normal. So far the bees have not really objected.

Varroa appeared and beekeeping became more difficult. Viruses became important diseases of honey bees. New pesticides, herbicides and fungicides entered the beekeeping scene through agriculture. The death of honey bees, our pollinators of our foods, was now of national importance. How could the bees be helped? Many people, urban, suburban and rural, took classes to become small-scale beekeepers. At the same time people found out bees were in trouble they were also turning to living a more healthy life. “Natural” became the buzzword of this new era.

“Natural” spilled over into the beekeeping world. Bees should be living a more healthy life. Their home had to be natural. At first the top bar hive was selected as being a natural hive. In top bar hives the bees could build their own comb without the guidance of foundation, just like they did in a tree. Some beekeepers looked back in history and rediscovered the Warré hive. Soon these hives became more available commercially. But beekeepers are creative and enthusiastic do-it-yourselfers. Modifications to both those styles of hives soon appeared. New modifications appear on the internet frequently. After all, beehives do have to be convenient for the beekeeper or the bees could become neglected and perish.

An assortment of beehives is available today. A beekeeper can make or buy a multi-story hexagonal hive. Top bar beekeepers proudly show off their creations. Windows in hives are as popular today as they were in the past. Curious beekeepers can have a look at their bees at work, even if the view is quite limited. As long as there are people who are fascinated with bees and wish to be beekeepers, more and more beehives will be modified or invented. Those hives will obviously be ones convenient for the beekeepers but will they be convenient for the bees? At least today we recognize that bees must have that magical bee space that incidentally makes hives convenient for us.

Over the many millennia that honey bees have been on earth and over the centuries that man has made beehives, the needs and wants of the bees has not changed. A dry cavity of about 40 liters, a small defensible entrance and placed not too close to the ground. However honey bees are very accommodating so beekeepers will continue to invent and modify to provide a home for them.

Ann Harman cares for her Langstroth hives, writes newsletters and attends bee meetings all around her home in Flint Hill, Virginia.