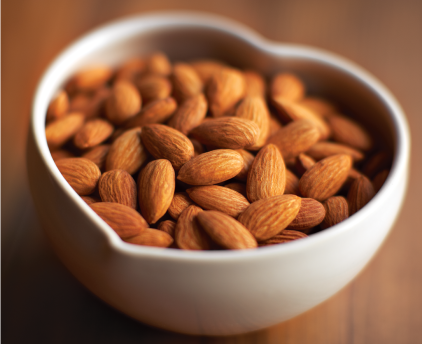 Innova Market Insights has said almonds benefit from consumer demand for simple, clean label ingredients, as well as a reputation as a healthy food. They also often feature in free-from products, such as gluten-free, preservative-free, and additive-free foods, it said. Their texture is also being used as a product differentiator, with the word “crunchy” used more often with almonds than with other nuts.

What’s more, almonds’ reputation for health has recently received FDA backing. Last fall, the agency started to work on redefining the word “healthy,” taking into account government dietary advice that specifically recommends consuming more mono- and polyunsaturated fats. Previously, manufacturers were not permitted to call high-fat products healthy – no matter which kind of fat they contained. After a dispute between the FDA and snack bar company Kind showed that the definition was out of date, products containing almonds can now be called “healthy” on-pack, boosting their image as a healthful food at a time when consumers are seeking such products more than ever.

Considering the recent five-year California drought and the amount of water needed to grow almonds — about a gallon per nut — some have questioned whether almonds can, or should, hold onto their position as the world’s favorite ingredient nut. However, compared to other agricultural products — milk and beef in particular — they are extremely water-efficient in terms of calories. And with more than 80% of the world’s almonds grown in California, the crop’s perseverance during years of drought suggests that the region will continue to answer global demand.

As a result of this, Almonds officially become California’s fourth state nut

In early July, governor of California, Jerry Brown signed into law a bill to make almonds the fourth official state nut. California officially now has four state nuts: almonds, pecans, pistachios, and walnuts. This all started after a fourth-grade class from Modesto petitioned to make the almond the state nut — California produces almost the entire country’s almond crop, and Modesto is a major center — and their sense of civics spiraled to where the mascots of the Modesto Nuts minor-league baseball team tagged along on a trip to Sacramento.