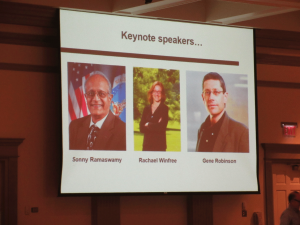 It was supported by 20 sponsors across the beekeeping, scientific, and crop production and protection stakeholder entities.  Sponsors supported student scholarships to the conference, as well as speaker fees and travel costs.

Dr. Christina Grozinger, summed up the previous two conferences, stating “In previous conferences we learned there are a lot of ways to kill bees.” This conference featured new research, published and soon to be published research, from around the world hoping to answer, “how can we keep bees alive?”

Sonny Ramaswamy, Director of the National Institute of Food and Agriculture (NIFA) opened the International Conference expressing the “need to corral all of the technologies necessary to address nutritional security at the global level.” He stated there is “a suite of contributors to pollinator losses: biotic and abiotic. Our path forward will include: transformative discoveries, 21st Century extension, farming systems, education, policies, regulation, and marketing, human dimensions, and communications. We need new approaches, and new opportunities at the cellular level, community level, and organismal level.” He suggested using the “Cochran collaboration,” taking the reductionist things and bringing them together to understand the whole system.” We need a “convergence singularity to bring together all of the constraints of angst, policies, public pressure, and regulations.” He encouraged others to read Pope Francis’ Encyclical Letter, “Laudato Si’ of the Holy Father Francis, On Care For Our Common Home, May 24, 2015. Read the Pope’s Encyclical it gives “street-cred” to pollinator research and concern from a trusted resource. You need people who are trusted, have credibility, and can engage with the public” in order to engage the public and mitigate the angst.”

Dr. Rachael Winfree from the Department of Ecology, Evolution, and Natural Resources at Rutgers University opened the conference the second day discussing, What can pollinators tell us about biodiversity and ecosystem services in real-world landscapes?

She reviewed the scientific literature to determine that “species richness does matter for ecosystem function.” The ecosystem contains different species richness, species identity, and abundance for different environmental conditions. But why does this matter?

“Complimentarity is a mechanism wherein biodiversity increases ecosystem services.” In a 2013 study by Garibaldi it was found that fruit set in a crop increases with the number of species pollinating that field. A study of pumpkins found the crop yield was better with pollination. Temperature affected pollinators visiting watermelons, and different types of bees have different temperature visitation times increasing pollination. So, if one bee was constrained due to the temperature another bee picked up the pollination task: one bee complimenting the work of another.

Through diversity of pollinators, research has found pollination “facilitation;” honey bees tend to work down the row, and native bees cross the rows in orchards aiding in needed cross pollination. “Response diversity” in pollination comes from redundancy which leads to a reliable function (similar to redundancy in engineering); 55 native bee species pollinate cranberries in New Jersey providing the necessary redundancy to insure pollination.

Research has determined bees respond differently to their environment. Real world landscapes often have strong dominance of some species. While experiments are designed to have an equal number of species, which does not reflect the real-world. In the real world species often turnover, or die-off with a few species becoming dominant.

In Dr. Winfree’s study of watermelon, cranberry and blueberry she found large numbers of species not pollinating, while a small number of species were doing the most pollinating. In a study in the Netherlands they found 2% of the bee species were doing 80% of the crop pollination eliciting functional dominance.  However, trying to separate the roles of dominance for the watermelon, cranberry, and blueberry in the real world we simply cannot remove the dominance of species. If there is no dominance, then more species would be needed. You do need more species due to species turnover, but dominance will suppress species turnover.

In previous conferences we learned there are a lot of ways to kill bees.” This conference featured new research, published and soon to be published research, from around the world hoping to answer, “how can we keep bees alive?”

Ninety percent of plant species must be pollinated to reproduce, the ecosystem services of pollinators contribute greatly to crops and wild plants. In a 2015 global study of conservation people acknowledged oxygen, water, and food have enormous value, yet there is less evidence that people take conservation action to protect water, oxygen and food.

Dr. Winfree also addressed how to motivate people to take local actions, not just global. “Marginal values and local cost benefit analysis affect decision making.” Cost benefit analysis study on the value of native bees on crops near pollinator habitat started as a negative, but by year four, research determined farmers can break-even, by year 10 their blueberry yield increased. However, more research is needed on the cost benefit of pollinators to support a change in human behavior. “The value of global ecosystem service is highly valuable, but people are irrational, and determining what motivates them is key to making change. Economics motivates people. If people pay for something they feel they do not have to be concerned about its welfare. And yet, we have people planting pollinator habitat not knowing the “cost benefit;” so, what motivated them?” Yet, not everything has to have a financial value – what about the intrinsic value – the diversity value, the balance value? “The public will respond to intrinsic value. We have a moral obligation to biodiversity.”

The third day of the conference began with Dr. Gene R. Robinson’s discussion of  “Understanding the Relationship Between Genes and Social Behavior: Lessons from the Honey Bee” Dr. Robinson is from the Carl R. Woese Institute for Genomic Biology, Department of Entomology, Neuroscience Program at the University of Illinois at Urbana-Champaign. Interestingly, seventeen percent of the conference presenters/researchers worked under Dr. Robinson. He discussed the power of social evolution: language, agriculture, warfare, and in the case of bees the social aspect of foraging which is a $30B per year ecosystem service.

His review of the scientific literature found a close relationship between brain gene expression and behavior, genetic toolkits for behavior, and striking individual differences in foraging behavior.

In gene expression, RNA and pheromones can alter behavior. Bees know where the nectar and pollen are at different points of the day, with the finding of 1329 genes differentially expressed in one study. In a honey bee dance language study the waggle dance communicates distance, direction, and value to other bees, bees measure distance by optic flow (scenery that passes by them) postulating there are  distance genes (thinking genes), and distance responsive gene expression was found in mushroom bodies and optic lobes of the bees.  Examining weaker behavior states, weaker or transcriptomic states, nurse bees and foragers – longer work time spent in these tasks, saw 1200 genes expressed by the bees. While bees serving as guards or undertakers – maybe a day or two of work in these jobs- only 19 genes were expressed. There are even different genes expressed due to the type of intruder to a hive.

However, Dr. Robinson noted the differences appearing between native and managed bees.

It makes honey bees dance more to share the good food source with others.

The study of “yellow 57”showed individual specialization of a water forager bee. She took 10 trips per hour for three minutes per trip collecting water at a creek, for her entire 17 day foraging career. Elite foragers were revealed using RFID chips determining “20% of foragers did five times more than 50% of the foragers. If you remove those 20% of bees, other bees step up their game, and fill that void with their reserve force.” Research has shown bees will make between one and 18 orientation flights before foraging begins depending on the individual bee. Some bees need more orientation flights than others.

In an in-hive observation study the social interactions of the honey bees was evident.

The “Party bee” who accomplished much in its short life had:

The “Lonely bee” experienced only 23 interaction partners, and a total of 24 interactions.

The Queen however, had 700+ interaction partners, and 4000+ interactions due to the nature of her function. The close relationship between brain gene expression and specific behavioral states; social regulation of brain gene expression; control of social behavior by context-dependent rewiring of brain transcriptional regulatory networks; evolutionarily conserved genetic toolkits for social behavior that span insects, fish and mammals; and evolutionarily labile pathways that subserve “me to we” transitions from the regulation of selfish to cooperative behavior are all important in understanding honey bees and native pollinators.

This conference was an opportunity to share global knowledge of transformative discoveries, improve 21st Century extension, adapt farming systems, increase education, adjust policies, regulation, and marketing, address the human dimensions, and facilitate communications bringing them together to understand the whole system, the ecosystem services, and intrinsic value of pollinators.