What we can learn from the bees.

Honey bees perform the waggle dance on the comb within a nest to inform other foragers of the location of a newly discovered food source but the dance is also performed by scout bees on the swarm cluster after swarming indicating potential nest sites.

There could be many individual bees directing their fellow scouts to such sites but amazingly, after a vigorous debate, the bees come to unanimous agreement before moving to their new home. This model of democracy is discussed by Tom Seeley in his excellent book, Honeybee Democracy and he goes further than that stating that there are lessons we humans can learn from the bees in our decision making groups.

If you have ever served on a committee you will know that it can be frustrating at times!  With all those human egos present many us have put our foot in it and said the wrong thing at times so any help we can get from our bees is most welcome in my mind!

So, before I sum up Seeley’s  ‘Five Habits of Highly Effective Groups’, that he has learned from honey bees perhaps we should pause and reflect on what type of team member or leader we have been in the past. As chairman of my Local Association I know I found it difficult chairing meetings so I am definitely going to try some of the following ideas.

Lesson 1 is to comprise the group of individuals with shared interests and mutual respect. This seems easy to do but the mutual respect part of it isn’t so easy as one wrong word can upset a fellow member and any ill-feeling can grow into a monster of unsurmountable proportion, and you may not even be aware of it.

The house hunting bees exemplify a group with shared interests as the genetic success of each bee depends on the fate of the entire colony and no individual bee succeeds unless the whole colony survives and reproduces. Looking at human groups Seeley uses the example of Town Meetings in America as good practice as the moderator (chair) in his example asks the meeting to pause for a moment’s silence at the start out of respect for the exercise in democracy they are taking part in and to prevent tempers flaring he asks everyone to address their comments and opinions directly to him.

Lesson 2 is to minimise the leader’s influence on the group thinking. This is a difficult one for us humans as it goes against the belief that the leader is in charge but a domineering leader is in Seeley’s opinion one of the greatest threats to good decision making in groups.

The bees choose their new home without a leader influencing or telling them what to do.

Each scout bee has her say by means of the waggle dance, and if she convinces another scout, that scout has a look at her proposed home, and if she likes it, does a waggle to influence others. This continues until all scouts agree on their new home. This has been compared to the single transferable vote system that is used in some elections, every opinion is taken into consideration. 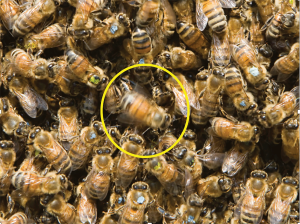 Lesson 3 is to seek diverse solutions to the problem. The house hunting bees demonstrate the effectiveness of a large and diverse search committee with hundreds of individual scout bees exploring an area of about three miles looking for the ideal home. When a potential nest site is found the scout bee returns to the cluster and reports her discovery with the waggle dance. If we relate this to human groups it is the same as putting another option on the table for further discussion. Seeley suggests allocating explorative work to individuals to report back and to create a social environment in which group members feel comfortable contributing.

Lesson 4 is to aggregate the group’s knowledge through debate. According to Seeley, the greatest challenge faced by a group that makes decisions democratically is to know how to turn the knowledge and opinions of the many members into a single choice for the group as a whole.

How do the house hunting bees reach consensus? We have already seen that the turbulent debate amongst scout bees supporting different options (nest sites) is at the heart of it. These groups compete to gain additional members from a pool of scout bees who are not yet committed to a site. Whichever group first attracts a quorum of supporters wins the competition and when they eventually leave for their new home they are in complete agreement about the flight path.

In running his faculty meetings Seeley encourages frank debate and most importantly group members are encouraged to form their own opinions and register their views independently. They do this by secret ballots as he feels it is important to get each person’s independent opinion, free from peer pressure that could influence them.

Lesson 5 is to use quorum responses for cohesion, accuracy and speed. The house hunting bees show us a clever way to make an accurate consensus decision while also saving some time. They do this by the scout bees making sharp changes in their behaviour when a threshold number (quorum) of individuals support one of the alternatives. They return to the swarm cluster to perform piping signals and this induces the many thousands of non-scout bees to warm their flight muscles in preparation for flight to the chosen site. Seeley suggests the piping also tells the scout bees from the other non-chosen sites to stop advertising and visiting these sights and this also speeds up the consensus. He calls this behaviour ‘quorum response’ and suggests it can also help human groups. Seeley’s faculty meetings are often faced with major decisions where a unanimous decision, one way or the other is required and he introduced a system of taking straw polls, by secret ballot, periodically during the discussion to see if they are near consensus. If the poll reveals they are far from unanimity then more careful debate is needed but if it reveals they are close to an agreement, the few supporting the minority position normally realise that a collective decision has essentially been made, that prolonging the debate is pointless and that it is best to switch to the majority position so that consensus can be reached. This is exactly what the bees do and Seeley claims that this and the other procedures he has introduced, learnt from the bees, has improved the decision making in the group he leads.

Of course, we humans often use other tactics in dealing with a leader we don’t like by carrying out a coup de tat, often resulting in an imaginary knife between the shoulder blades, but that just shows how far behind the honeybees we are in our democratic process!

Tony Harris, NDB is a Scottish Expert Beemaster from Morayshire.