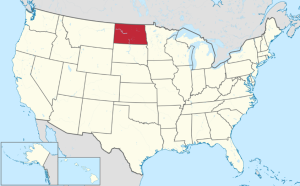 BISMARCK, N.D. (KXNET) — When it comes to a state known for heavy wind, freezing cold temperatures and the occasional blizzard, it makes it very hard to imagine how that same state could also be a hive of activity for beekeepers.

In spite of the drawbacks, however, the beekeeping business is hugely popular in the rural states — with North Dakota being the queen of United States honey production.

In 2021, in North Dakota alone, there were 325 registered beekeepers, owning a combined 740,000 hives. At least one-third of all registered beehives in the United States spend at least some time every year in rural areas in the state.

Honey is a major export for many of our rural beekeepers, and one of our most unexpected major assets that we produce. In fact, North Dakota has held the title of lead honey-producing state for more than nine years with a reported 38.6 million pounds, worth over $61 million, produced in 2020 according to the North Dakota Department of Agriculture.

“We produce what’s called ‘white honey,’” said Gregg Stewart, owner of Stewart Apiaries in Bismarck. “It’s a real light-colored honey, and it’s preferred by a lot of people and packers.”

Seeing a state like ours host some of America’s best beekeeping is rather odd, given the environment and climate we’ve grown to know. Events like the recent blizzards show that the damage nature does to outdoor structures here is enough to bury entire barns of animals. If Mother Nature can take out a stable, one reasons, why can’t she deal with a beehive?

As it turns out, beekeepers do have plans prepared for the winter weather. And many times, it boils down to “don’t be in the storm to begin with.”

“Most of North Dakota beekeepers are commercial,” explained Stewart, “and they’re also migratory. So they have several thousand hives, and they typically then migrate or move their bees in the fall to a better place for the winter. lot of them will go to California, some still go to Texas, some go to Florida. You also see some people build and rent out whole insulated warehouses to keep their bees safe and producing all through the winter.”

These ways of circumventing the problems of North Dakota life have allowed beekeepers to not only keep the honey flowing but to improve their craft as well. New advances in beekeeping collaboration and technology have also helped to allow the industry to grow further, and help keep our legacy as the top honey producer in the United States in full bloom.

We are here to share current happenings in the bee industry. Bee Culture gathers and shares articles published by outside sources. For more information about this specific article, please visit the original publish source: World Bee Day: the buzz on North Dakota’s beekeeping industry (kxnet.com)