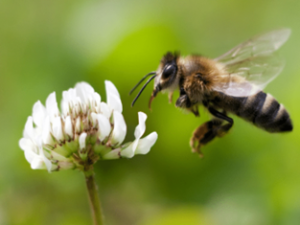 Bees are an ideal society, that we, as humans, can learn something from. They work well together, are cooperative and care for one another. We are also more reliant on bees than we would like to think. Bees are guardians of biodiversity and ecosystems and are considered the invisible helpers of farmers across the globe. Of the 100 crop species that provide 90 per cent of the world’s food, over 70 are pollinated by bees. They also play a significant role in achieving the Sustainable Development Goals. By acting as pollinators, bees promote biodiversity (Goal 15) and fight hunger (Goal 2). They provide decent jobs (Goal 8) in agriculture and other sectors, advancing Goal 1, no poverty.

Unfortunately, current human activities are detrimental to bees and other pollinators. Extinction rates of bees are 100 to 1,000 times higher than normal. This decline in bees can be mainly attributed to human activity. The use of pesticides and loss of habitat due to farming and urbanization are the most prominent causes. Bees’ survival and development are also threatened by climate change. Across Europe, bee populations and honey stocks have been falling since 2015, in some places up to 30 per cent annually.

According to FAO, maintaining bee habitats and committing to more sustainable agricultural practices, including the use of indigenous and local knowledge and avoidance of pesticides, are key to safeguarding these species. Each of us can choose local organic produce when possible, and plant pollinator-friendly plants, such as shrubs and daisies, in our gardens. Even small, urban gardens can be instrumental in conserving bees.

The United Nations designated May 20 as World Bee Day to raise awareness of the threats to bees and their contribution to our planet. This year’s theme is ‘bee-engaged’: celebrating the diversity of bees and beekeeping systems.

To mark this year’s World Bee Day theme, UNRIC focused on bees and beekeeping in Ireland. We spoke with Thérèse Scanlon, Secretary of the Native Irish Honey Bee Society (NIHBS). NIHBS is an all-island organisation whose aim is to promote the conservation, study, improvement and reintroduction of Apis mellifera mellifera (Amm) throughout the island of Ireland.

What strain of bee can be found in Ireland?

The Native Irish Honey Bee (Apis mellifera mellifera) is a strain of the Dark European Honey Bee which was once widespread across Northern Europe. Tragically they are now scarce in most areas due to cross-breeding with other strains of the honey bee and diseases from imported bees. It is the only honey bee strain native to Ireland.

Dark in colour and resilient to our unpredictable weather our sturdy little native bee has many attributes that specifically aid it in prospering here including an ability to tolerate long periods of confinement to the hive in winter and an ability to fly at low temperatures and in drizzle or light rain. Clearly, our native bee is admirably adapted to life in Ireland!

We are extremely fortunate that a strong and genetically diverse population of our native bee still exists in Ireland, but it needs protection if it is to continue to survive and thrive.