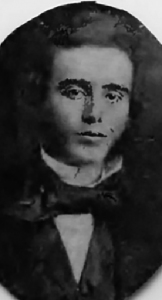 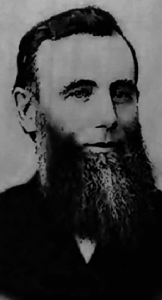 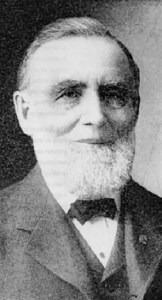 Charles worked his way through college and had a horror of being in debt. Thus he was always on the lookout for jobs to earn money. His mother had taught him enough ornamental penmanship that he was able to fill in 88 names on diplomas at two commencements and got paid $44. He worked at Professor Jackson’s garden for seven and a half cents an hour; raised a crop of potatoes; clerked at a town election; peddled maps; and taught a term at an academy for $100.00.

He attended Jefferson College in Cannonsburg, Pennsylvania.  Then he attended Union College in Schenectady, New York, graduating with an A.B. degree at the age of 22 in 1853. He had about $80 left of his earnings when he graduated.

He studied medicine with Dr. Sheridan Johnston at the Medical Department, University of Michigan. Later he attended course lecturers at Ann Arbor, Michigan University and completed his course of study in 1855. He was a member of Phi Beta Kappa and received his M.D. at the age of 24. He practiced in Earlville, LaSalle County, Illinois and came to Marengo, HcHenry County, Illinois in 1856 and practiced medicine for another year. He gave up practicing medicine because the pursuit of an education had impaired his health plus his sensitivity of doing the wrong thing weighed heavily on his mind. The Civil War (April 12, 1861 – May 9, 1865) also didn’t help matters. Thus for a while he had jobs as being a clerk, a traveling salesman, and teacher. His first teaching was in Shelsbury, which isn’t listed on the map anymore.  Then he went to Johnstown, Pennsylvania, where he taught vocal music. Later in Marengo, he taught instrumental music. He had an excellent voice and was an accomplished piano player. He even was the principal of Marengo public schools for three years.

It is difficult to have a chronological order of Dr. Charles C. Miller’s life because several things that he did happened concurrently or overlapped. 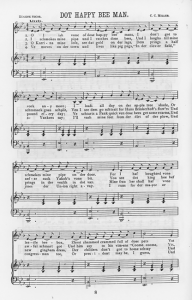 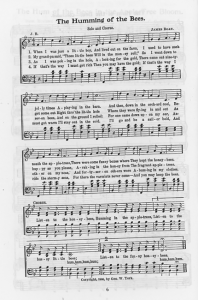 For a time he was a music instructor in the old “Marengo Collegiate Institute” whose existence is now but a faint memory among the older members (1885) of McHenry County Society. Charles also sang at the Marengo Opera House between 1883 and 1914. Charles was full of music and at one time was a regular contributor of both words and music to the famous “Song Messenger.” He was the efficient choristler in the Moody Church of Chicago and even in his old age, he still was classed among the “sweet singers.”

Eugene Secor and Dr. Miller worked together to compose several songs that were published in “Songs of Beedom.”  Eugene was the word author and Dr. Miller was the music author. The names of the songs were: 1. “Bee Keeper’s Reunion Song”; 2. “The Hum of the Bees in the Apple-Tree Bloom”; 3. “Dot Happy Bee Man”; 4. “Bee Keepers Convention Song”; and 5. “Spring-time Joys”. In the early afternoon of the International American Bee Keeping Association meeting of 1888, “The Bee-Keeper’s Reunion Song” was sung with Dr. C.C. Miller leading the singing. Several essays were read and discussed and then “Dot Happy Bee-Man” was sung with Dr. Miller using his best imitated German dialect. The members in attendance were amused.

Dr. Charles C. Miller married Mrs. Helen M. White, August 12, 1857. She was the widow of Thomas White. She was instrumental in getting Dr. Charles into beekeeping by catching a swarm in a sugar barrel when it landed on their porch in 1861. They had a son, Charles C. Miller. Helen died March 18, 1880. In an article in the Marengo Beacon/Republican newspaper, mention was that their son, Charles C. Miller was a Second.  However in another article of the Marengo Beacon/Republican the “Second” was eliminated. Thus we don’t know Dr. Charles’ middle name. Dr. Miller’s son went into the Infantry in 1899, and then had a job as a clerk in the Adjutant General’s Office. His middle name on the Adjutant General’s records was Clinton. Dr. Charles Miller’s middle name could have been Clinton or something else starting with a “C”. It could have even been Charles, due to his grandfather Charles. 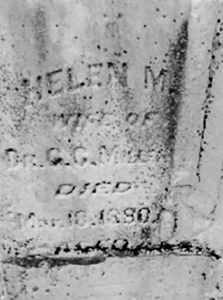 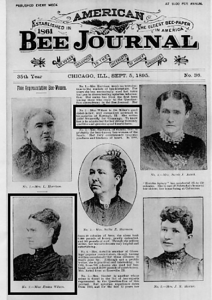 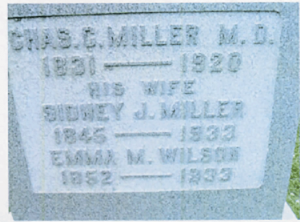 Back side of the Miller Headstone.

In 1870, Dr. C.C. Miller started writing articles for the American Bee Journal and several years later he became a regular contributor and associate editor. He also wrote for Gleaning in Bee Culture, becoming a department head, Country Gentleman, Youth’s Companion and every book of importance on bees. He was the editor of the department on Bees in the Standard Dictionary, and his writings have been translated into the French, German, Swiss, Italian, Russian and Japanese publications. He wrote: “A Year Among Bees” in 1886, “Forty Years Among the Bees” in 1903, “Fifty Years Among the Bees” in 1911, “Apiary Terms” for the Standard Dictionary and A Thousand Answers to Beekeeping Questions in 1917.” Due to his many articles, the bee publications in Texas, dubbed him as the “Sage of Marengo.”

In 1878, Dr. Miller began to devote his entire attention to bee-keeping, and for many years kept from 200 to 400 colonies in four apiaries, all of which were run for comb-honey. In 1897, Dr. Miller’s apiaries produced 17,150 pounds of honey. He was the inventor of the “Miller Feeder,” the “Miller Tent Escape”, and “Miller’s Introducing Cage.”  His method in rearing queens is legendary and practiced all over the world.

He was president, twice, of National Bee Keepers Union.

Emma Wilson had a medical problem and took up beekeeping which helped her greatly. She started writing articles for the American Bee Journal, and had her own column entitled “Bee-Keeping for Women” which changed to “Our Bee Keeping Sisters”. On an American Bee Journal cover in 1895, she was featured as one of the five representative bee women.  She passed away April 1, 1933.  However it seems strange that Charles’ spouse and sister–in-law are both listed on the Miller headstone. Perhaps it may be due to the fact there is another Emma M. Wilson, from another family, that was born in 1866 and died May 18, 1932 buried in the same cemetery.

He was one of the original Prohibitionists of McHenry County, being a firm adherent of the party and a strong advocate of the temperance cause. He was always a friend of education and had served at different times on the Marengo School Board.

He was well acquainted with Nature and flowers; he was elected secretary of the Northern Illinois Horticultural Society, and later became its president.

After Dr. Miller died September 4, 1921, Maurice G. Dadant suggested that a memorial should be erected to his memory.  It was further suggested that both Gleanings and American Bee Journal should be involved, because he had served both magazines for a long time. Other bee magazines and beekeepers joined in and the result became one of the largest collections of beekeeping literature in the world.

The planning committee consisted of C.P. Dadant, E.R. Root, Dr. E.F. Phillips, E.G. LeStourgeon, and B.F. Kindig.  They discussed the idea of a monument, a scholarship, and decided on a library. There was much interest in having the library at different institutions, but it was decided to be at the University of Wisconsin at Madison, Wisconsin.  Donations of books and funds were sought. Some of the first books in the collection were from Dr. C.C. Miller’s personal library and were so marked. These books had been purchased by the American Bee Journal and donated to the library. In 1922, the University of Wisconsin was awarded the gift of $1,957.53 to be used for the maintenance of a beekeeping library. A small endowment continues to fund additions to the collection which has grown to approximately 6,000 volumes. Many of the books are written in German. The most important contribution was that of Arthur C. Miller of Rhode Island, who gave his entire personal beekeeping library. There were more than 100 old books, some very rare, including a complete set of Beekeeper’s Review and nearly complete sets of American Bee Journal and Gleanings. The value of this donation was estimated to be about $1,000.00.

In 1930, the library of Col. H.J.O. Walker of Devon, England was added.  The Walker library had been started by Alfred Neighbour about 1850.

The dedication was planned by the Dr. C.C. Miller Memorial Library Committee, University of Wisconsin, and the Illinois State Beekeeper’s Association. It was held August 13 to 18, 1923 in conjunction of the annual Beekeepers’ Chautauqua on the university grounds at Madison, Wisconsin. The meeting would start off with the dedication of the library, a pilgrimage to the Miller residence, and finish with a service in the church at Marengo where Dr. Miller taught Sunday school for many years. A memorial Tablet was hung in the church.

The planned activities of the dedication ceremony on August 17th were: Report of the committee at 8:30, acceptance of the library by E.A. Birge at 10:00, Speeches by: H.F. Wilson, A.C. Miller, Francis Jager, N.E. Fance, George H. Grim, George S. Demuth, F. Eric Millen, and Alois Alphonsus from 10:15 to 4:00. That schedule was changed, because A.C. Miller died June 11, 1923. He had donated his bee literature collection prior to his death. Then there was a break for Swimming and Supper and for those that wanted to attend a reading of letters from Dr. Miller’s friends at 7:30.

The activities for the 18th were:  A four to five hour pilgrimage starting from the Camp Ground at 8:00, a basket lunch held in Marengo at 1:00, an informal reception at the former home of Dr. Miller, and a church service to place a tablet.

The Tablet that was hung in the church reads:

“This Tablet is erected by beekeepers to Charles C. Miller a former resident of Marengo in appreciation of his services to beekeeping and as a mark of esteem.

A library of beekeeping literature has been endowed at the University of Wisconsin to his memory.” 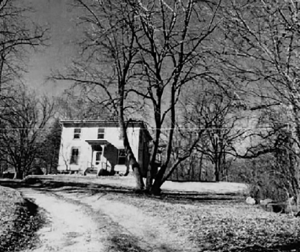 The property had 36.47 acres of land and was located on State Route 23 south of Marengo at the city limits. I found that the address is 6207 South State Street, Marengo, IL 60152. Through the years it has been owned by several people, perhaps one of them that had it the longest, other than Dr. Miller was Mrs. Charles Stokes, who ran a gift shop in one of the buildings. She kept the rest of the property pretty much the way that Dr. Miller had kept it. 20 Pictures of it may be seen on the internet by looking up “Stokes Family Home, Marengo, IL”. On August 12, 2016 it was sold for $349,000. This year, the property was again sold and closed March 3, 2017 for $460.000.