Winners of the lg Nobel Prize are awarded for their ability to make people laugh, and then think. 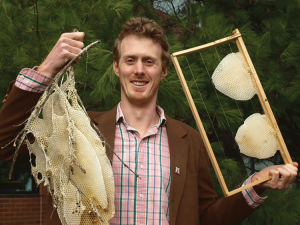 I can’t think of a better recipient than Next Generation Beekeeper Michael Smith. You will know him as “the guy who stung himself for science.” Michael made international news in 2014 when he quantified pain from honey bee stings in 25 places, including his armpit, fingertip, and yes, “there”.

A couple years prior to international fame, I got to know Michael as being the impossibly kind and funny grad student in Professor Tom Seeley’s lab. He’s been studying comb building in honey bee colonies at Cornell’s Department of Neurobiology and Behavior since 2011. Prior to working with Dr. Seeley, Michael studied molecular biology at Princeton. While he didn’t specifically study honey bees at Princeton, his love of bees and beekeeping inspired him to start the Princeton Beekeeping Club, which is still thriving today.

Keep rewinding the tape, and you can see that Michael’s love of honey bees actually started in luscious and picturesque Wales, UK.  There he attended the United World College of the Atlantic. He had previously kept hives of stingless bees (Tetragonisca angustula) in his native Panama. A colony from his teenage years still thrives in a cooler under his mother’s deck today! But until a run-in with a honey toting beekeeper, Chris Adam, Michael hadn’t experienced Apis mellifera.  Honey bees are Africanized in Panama, and beekeeping is not a casual urban affair. After a lengthy chat with this local beekeeper, Michael insisted that Chris give him a tour of his honey beehives. Chris happily agreed, and took down Michael’s contact information on a scrap of paper. Sadly, Chris lost the paper scrap.

All was not lost, however!  Local beekeeper Chris Adam rediscovered Michael Smith after spotting him on the BBC. Michael was part of an attempt at the Guinness World Record for fitting the most nationalities into a swimming pool at once. Yes, that’s a thing. Chris found Michael, Michael found honey bees, and Chris and Michael founded the United World College of the Atlantic Beekeeping Club. From there launched Michael’s current love affair with our sweet honey bees.

Although Michael has just earned his PhD from Cornell, he’s not leaving bee research anytime soon. He’ll be Europe bound this Fall, with a post doc position at the University of Konstanz in Germany, as part of Iain Couzin’s group. This lab has the technology to barcode and track individual bees in the hive, and Michael will be again focused on comb building.

So while I’m not sure if Michael will be putting bees up his nose for science anytime soon, with his lifelong passion, and genuine fascination for bees, I am positive that he will have a significant impact on our understanding of everyone’s favorite charismatic minifauna. Read on for 37 facts about Michael Smith.

What do your parents do: mom, dad (and both grandpas and one grandma) all work/ed for the Panama Canal.

What career path would you be on if you weren’t studying/keeping bees: Undoubtedly something in the science realm still.

Hidden talents: Can put both feet behind my own head.

What song is on repeat: David Bowie – Jean Genie.

Most favorite part of a bee’s anatomy: Nasanov gland.

Favorite book: The World According to Garp.

How do you keep cool in your bee suit: The lab standard of flyweight quick dry long sleeve button up and pants (think fly-fishing attire).

Weirdest place you’ve been stung: Knee hole (the place behind your knee, see even explaining it is weird).

Person you text the most: Ladyfriend Cissy Ballen.

What item do you bring to potlucks: Flan, always flan!

Best beekeeping conference you’ve been to? EAS (Vermont and Delaware are a tie).

In 140 characters, or less, what does bee conservation mean to you? Conserve habitat for honey bees, and by doing so, protect all bees.

Who do you look up to most?  My family, I see them like one big colony.

Money being no object, where would you travel to: Australia.

How do you feel when a colony dies, in one word: Despair.

How do you decompress: Gardening.

Sarah Red-Laird is the founder and executive director of The Bee Girl Organization. Find out more at www.beegirl.org.