Honestly, I don’t precisely remember my very first introduction to Editor Kim. It was a long time ago. I don’t even remember when I exactly learned that he was to be the new editor of Gleanings in Bee Culture. Surely, I must have had anxious moments. Indeed, I even have them now in anticipation of Editor-to-be Jerry Hayes becoming the next editor.

As Kim began to take responsibility, I wondered if I would I still be able to submit frequent articles and interact with Kim in a productive manner? I previously had good working relationships with some of the previous editors that came and went during my professional life in Ohio. The editors with whom I have worked were Larry Goltz, Mark Brunner and, during a rare editor vacancy, John Root. But by far, most of my experience has been with Editor Kim Flottum.

In my early career, each of these editorial changes was a bit threatening to me. It was change. Honestly, I needed these editors to accept my submissions so I could aggrandize myself and develop a presence in the literature of the bee industry. In retrospect, I was not sure that any bee magazine needed me at all, but I needed them. 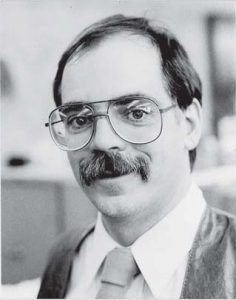 Editor Kim as he would have looked when we first met.

At this point, for those who can, please remember all that has come to pass in beekeeping. Oh, so many changes. For those who didn’t get the chance to experience some of these past memories, I will try to describe just a few.

Those days were the very early days of personal computers. I could use Ohio State’s computer room equipped with Radio Shack computers running a primitive word processing program called Scriptsit. It was a miserable clumsy software package to learn. Nothing was plug-and-play then. Printers were marvels that required setting individual dip switches to have the computer communicate with a specific computer model. It was a wild time in developmental computer technology. All of us old people slogged through these “Model T” years to get to where we are today. I have no interest in the good, old computer days, and want IT people nearby. It was a changing time for publishing a magazine.

Or, I could just ignore all of these early technical hurdles and do what I had always done for the other editors – hand write my article and mail it to the early editors with photos. I did that a lot. I have always been perpetually late when meeting article submission deadlines. In fact, this very article is remarkably late. 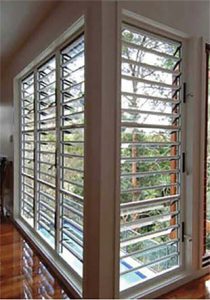 An example of jalousie windows. These are not Editor Kim’s windows.

If I really cut things close, I would drive to Medina and personally deliver my hand written draft article on lined yellow tablet paper to Kim. On weekends or after hours, I found that I could pull the glass up ever so slightly on his jalousie windowed door and drop the draft to the floor inside. This was frequently my delivery method. The building and the door are now long gone, but my memory is strong to Kim, Kathy Summers1, and me.

I wish I had a single one of those hand written articles now, but they were a temporary transfer medium. None remain. Ahh, those were the good days. No, they weren’t. They really weren’t.

My first article for Kim’s tenure as editor was the April 1986, issue. At the time, Africanized Honey Bees were all the rage. It’s true. U.S. beekeepers were worried about them.

At the time, Gleanings in Bee Culture was using black and white and was printed on some kind of newsprint paper.

The article masthead of the first article I sent to Kim. April 1986.

From my perspective as a writer, the advances that have been made during Kim and Kathy’s time has been significant. It’s true. Many of the other publications in the industry have also improved greatly, but Bee Culture is right there in improved publication advances. Additionally, Kim initiated a second bee magazine, directed primarily at true beginners, that has been well received. This subscription and newsstand publication is high quality and presents a good impression to whimsical buyers and to beekeepers who are establishing themselves. 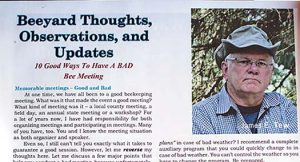 Everyone with a video camera became a videographer

Just as today, everyone with a smart phone seems to be a moviemaker. It was more challenging in 1986 and for a while thereafter. Editing was particularly tricky. Piece of cake nowadays. After making a few very early videos with John Root, the CEO of the Root company, my video work sat dormant for a while. As I recall, it was Kim who first met Beekeeper Bob Smith. Having worked for Public Television, he was an accomplished video man and had decent video equipment. Bob was a highway to the next phase that Kim began with me tagging along. We had a crew. Seventeen years ago, we made videos. Some are more memorable than others. 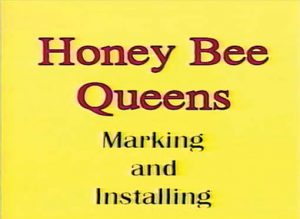 An early video that Kim, Bob and I put together.

We made multiple shows and Kim marketed them in Bee Culture. They were reasonably well received and commonly pirated as is still the norm. Not much changes. I have only a few of these old shows, but I do have one on queen introduction that Kim, Dave Heilman, and I “starred.”

The video was action-packed. Bob had decent sound equipment and solid editing skills. It was a cliff-hanging bee movie. Since bee basics do not change much, the information is still valid, but the production is beyond format updating. Yes, it’s true. The piece is now “vintage.”

The stars of the show were: 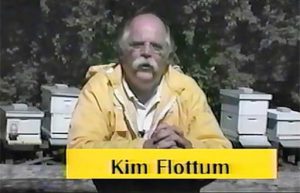 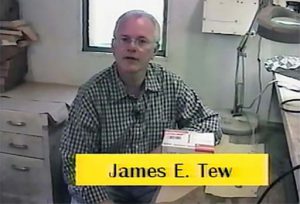 For your eternal enjoyment, I have posted this video at: https://youtu.be/HklpteMF-aQ 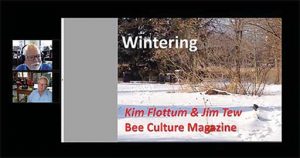 The first Kim and Jim Show.

The Kim and Jim Show

Through years, other video projects came and went, but I suppose our highwater mark was the Kim and Jim Show. The K&J gig was essentially Kim’s idea. The concept was that we do various events as we could arrange them. Beautiful on paper, but sometimes terrifying in reality. It was to be live without any time delay. What we shot is what you saw (and heard). Kathy has always been the videographer. I sometimes feel that people watched just to see what we would do next, and how we would recover from it – all live – and all with an element of movie danger.

Some of the events were PowerPoint presentations, while others evolved into interviews and outdoor events. We even have accomplished two international events from New Zealand and another from France – once again live. For me, this project has been a challenging event that forced both Kim and me to grow, ever so slowly, in Internet video technology. I’ve a bit of video experience, but I must say that I doubt I could ever have done this without Kim’s IT people leading the way.

An example of a Jim and Kim show on the subject of package bees is shown at: https://youtu.be/Rsybj6K_5BE 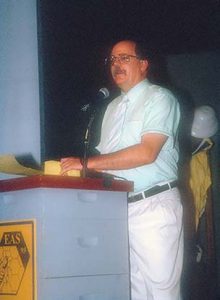 In 1995, Kim, Kathy, and a host of others including me, hosted the 1995 Eastern Apicultural Society (EAS) event. From the start, we all wanted it to be a major happening with many speakers and multiple outdoor events and equipment demonstrations. We accomplished most of that. A rainy day forced some changes, but we were prepared for them.

Kim went on to preside over several other EAS events, including being Chairman of the Board for eight years, and another EAS happening with President Kathy at Kent State University in 2005.

A promo video tape, of the 1995 meeting is presented at the following web address. It shows many old-time beekeeping masters in this twenty-four-year-old video. It is a quick video history for new beekeepers. Be warned that it is dated, from an old film format, and more than a bit hokey. At the time, it was good. Now, it is forgotten. Kim, however, provided a stellar performance.

You will break some eggs

While working with someone for more than 30 years, some eggs will get broken. By far, most events, trips, video shoots, or projects, nearly all were uneventful. But there were those that stand out. Here’s one.

It was to be an uneventful drive. 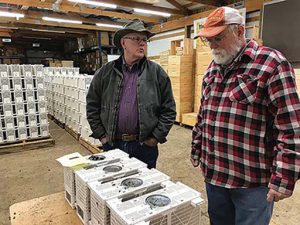 Jim explaining to Kim that he will not be stung.

Yes, it should have been an uneventful trip. We were to speak at an Ohio Farm Bureau meeting in Columbus. Our topics were something about bees. Early morning, Kim and I left Wooster, with me as the driver of a typical high mileage Ford Taurus state car. The sun was to our back, and I was driving the speed limit. Any traffic citations awarded while driving a university car belong to the driver and not Ohio State. I was a steady driver. Because it was early, our conversational chatter was painful or non-existent. The four-lane highway had at-grade crossings. The road was not an interstate. 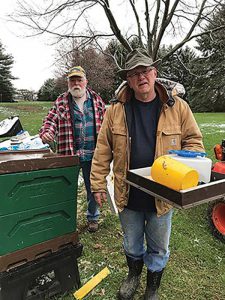 Jim working on the video set as Kim offers instructions.

At the moment, we were quiet. I was watching a car that had pulled into the center median at a crossroad and kept slowly rolling. I felt that the car was simply crowding me to get past the intersection so the occupant(s) could go their way. Obviously late for something, the car kept slowly rolling. I was driving about sixty miles per hour, and the vehicle in the median was still slightly rolling.

At the absolute last possible millisecond, the car accelerated – hard. I was right at the car. I had no chance. One of my strange memories was the mental still photo of a Chrysler automobile emblem being right at my left mirror. My second mental still photo was the ditch before us. The impact was deafening. Tiny pieces of glass flying everywhere. White dust all over. Kim, more than I, had tiny blood flicks all over his arms and face. I only had a few. 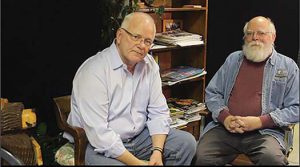 Then there was the steam, the hissing, and the car alarm going off. Confusion. People all around. Kim getting out of the car. Having banged the left side of my head on the upper door jam, I was wondering who the president was and how we got into this ditch. Ultimately, we were okay. The other driver was at-fault. She contested at the site, but witnesses confirmed what happened. 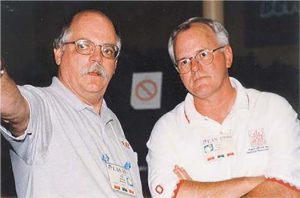 Yet more instructions from Editor Kim.

The thing that surprised me most – during the lead up to the impact, then during the impact, and then the aftermath – Kim nor I uttered a single sound. I suppose I thought we would be producing exotic language, screaming, moaning – something. Throughout the event, we made not a single sound. I was trying to drive, and Kim said he was bracing for impact. I suppose we were both busy.

That was a high-water mark of a sort, and a trip we will not soon forget.

No one is going away 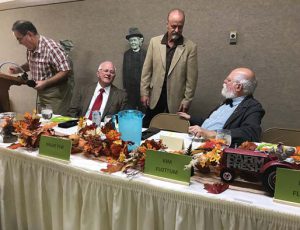 Kim and Jim with Denzil St. Clair at the 100th Anniversary celebration of the Lorain County Beekeepers in Ohio.

Kim has said that he is not going away. Neither is Kathy. She will continue to work with new Editor Jerry for a while. I will continue to bore long-suffering beekeepers about how good the old bee days were. Kim, I suspect will continue to write books and produce podcasts. Maybe we will try some more videos. We are not retired. Just presently unemployed.