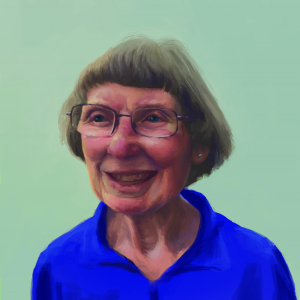 Montana is a large, very beautiful state where Dr. Jerry Bromenshenk has made his home throughout his life. He grew up on a farm in Billings. The crops grown were alfalfa hay, barley and corn. Jerry’s father contracted to feed cattle, as many as 1,100 during a year, brought in from the range before they went to market. Since Jerry’s father did not own the cattle, he changed to dairy cows, which his own father raised and milked. The farm had the usual assortment of animals, pigs and dogs and cats, and chickens. But the rooster that attacked and terrified Jerry, age five, ended up on the dinner table. His wild mice enjoyed the running wheel he provided for them. He also liked investigating swimming organisms in pond water with his microscope. His love for building things resulted in a large, three-foot by three-foot ant farm. His hobby now is still building things, only today it is fine furniture. He enjoys time in his woodworking shop with most of his father’s woodworking tools, but he also keeps adding to the collection. 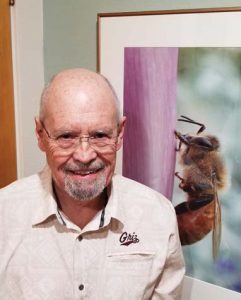 During his childhood, farm work was necessary, so he became the tractor driver during the Summer months, starting when he was five years old. His school teacher didn’t believe his story about spending the Summer driving the tractor, so his parents had to verify his story. Jerry also began helping his father with milking the dairy cows when he was about eight years old. When his father retired from farming because “it wasn’t fun anymore” Jerry realized that he never thought farming was fun even though he liked the animals. He did not consider staying with farming because he had too many allergies.

After two years at what is now Montana State College – Billings, he transferred to Montana State University in Bozeman, majoring in Zoology with minors in chemistry and philosophy. He continued on there to receive his PhD in Entomology, minors in biochemistry and philosophy. His roommates at college were in electrical engineering and mechanical technology. To earn some money, Jerry and his two roommates built high-end stereo systems for the faculty members. This project gave him the foundation of his future work with recording bee behavior and bee sounds.

Jerry’s PhD thesis topic was on the Big-Headed Grasshopper with blue “knees” that had specific feeding preferences: western wheatgrass in certain areas, but it also grazed on stressed vegetation. His work was one of the first to show that insects could change their behavior. The grasshopper’s feeding preference was partly from both visual and sound communications. He made an endless number of audio tapes of their sounds for frequency analysis. He found that the grasshoppers had a large “vocabulary” of sounds: ones for territory, another for attracting mates, another for chasing off competitors and even one for controlling distribution of population. So here was his start in insect sounds that has continued for many years with studying the sounds of bees.

Jerry likes bees for several reasons. He learns something new from and about them all the time. He appreciates an animal that can defend itself, one that is not domesticated. In his words: “one has to meet them on their own terms.”

Since the information from eastern Montana showed very clearly the area of power plant emissions, Jerry and his team were sent to Puget Sound to monitor pollution in that area. He termed his bees “flying dust mops” since the bee’s body hairs accumulated airborne particles. The results snowballed into working at other sites and ended up with the interest of the Department of Defense that sent him and his team to various U.S. Army sites in Maryland.

Could bees detect land mines and also signal toxic chemicals? They certainly can! Those working on the toxic chemicals tests reported the bees’ sound changes immediately when exposed. The bees at work finding unexposed land mines were so successful that they found one that nobody knew was buried. The hives used for this sort of work are actual working hives with one big difference – they are also full of electronic equipment detecting many things about the bees’ actions, sounds and responses.

For 20 years Jerry was the Montana State Director of a Department of Energy program to obtain competitive grants for energy research. Because of his skills at grant-writing as well as building teams, the University hired him to lead the state’s Energy Program. This program involved the three research institutions of Montana – the University, Montana State University and Montana Tech.

During Jerry’s work with bees over the years he has observed not only their sounds but also their behavior and their ability to learn, rather quickly, about their surroundings. One project involved bee hives living on a boat where the bees could travel out to search ocean-going boats as well as searching shorelines. The colonies chosen to ride on the pontoon boats were trained to detect explosives. For the first day or two the bees refused to leave their hives. Then the bees must have decided the rocking boat was now normal living conditions and started their usual flying out to forage. They were able to search other boats as well as the shoreline.

When the project ended after two weeks, the hives on the boats were collected along with a number of hives that had been stationed on land for some surveys. That night, hot and muggy, the colonies that had been stationed on land objected strongly and nastily to being loaded on the truck. The bees from the pontoon boats, used to erratic motion, did not even bother to stick their heads out. 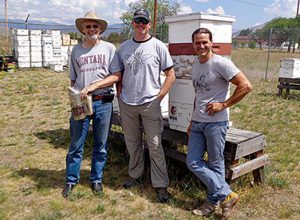 In another experiment bees were fed syrup and were marked on a high table next to the door of a pickup truck parked in a grassy field. They would then fly back to their hives in an apiary two miles away. The bees were supposed to search the grassy field for odors from flowers. However when the pickup entered the field, the bees would meet the driver at the truck’s door and follow him wherever he went. If the driver was not there but other people were, the bees would hover in front of them waiting for the syrup, causing a bit of a panic.

Throughout Jerry’s years of working with bee sounds and behaviors, technology has progressed rapidly, enabling him to take advantage of the newest systems as they came along. He does not, and has not, worked independently. He assembles teams of people, experts in different fields, some of whom have worked with him over decades. In 2003 Jerry, with four other University of Montana faculty, founded Bee Alert Technology. One colleague, Robert Seccomb, is an expert in computer Artificial Intelligence (AI) that makes the newly-introduced app the most convenient way for your colony of bees to inform the beekeeper of its status.

Over the years Jerry thought of ways a beekeeper could learn the health of a colony from the sounds produced. Not too long ago in 2012 he and his team had developed a hand-held recorder that did record and analyze some sounds. However the technology current at that time meant it was too big and cumbersome to produce and too expensive. Furthermore, it had a tendency to break, especially when run over by trucks. So that particular approach was abandoned.

Jerry did not have long to wait for new technology. In 2017 Android’s and Apple’s new smartphones appeared with fast processors. What had taken minutes to process now took only seconds. So this past Spring the Bee Health Guru app was introduced. You may have seen the article in the May 2019 issue of Bee Culture with its description and requests for feedback from users. With Jerry’s smartphone app, beekeepers worldwide can contribute to bee sounds and behaviors, thus increasing our knowledge of a remarkable small insect, the honey bee. You can also listen to him talk about this and his program on www.BeekeepingTodayPodcast.com.

His work over the years, has taken him throughout the U.S. and Canada as well as Europe, South America, Malaysia (where he saw the giant honey bee), New Zealand and Australia. The honey bees of New Zealand have a different sound than the bees found in the U.S. Through his work with bees over the years he has found some very interesting aspects of bee behavior that will keep him continuing research.

He feels that today we do need healthier bees and that our bees need better management, both by small-scale beekeepers and the large commercial outfits. Jerry has watched technology change faster and faster throughout his life and this progress has changed agriculture. His comment, “honey bees will survive, regardless of what we do” indicates that it is the beekeepers who may not survive the losses that are occurring today. One thing is certain: things are going to keep changing. Beekeepers who don’t, can’t or won’t change will be left behind.

His wife, an educator and artist, enjoys keeping track of Jerry’s work with bees by keeping a scoreboard. Whenever the bees do something unexpected, the bees win one point, while he receives a zero. So far, the bees are winning. He, and his team of collaborators, do attempt projects where the risk of failure is high. But that approach can have high pay-off.

Jerry is not a beekeeper. However he and his team have colonies that are used for classes and their research. They usually have about 25 or up to 50 colonies. If more are needed they will rent them.

Although Jerry officially retired from the university in 2012, he was soon back there to work as the lead instructor of the university’s Online Master Beekeeping Course that now reaches not only throughout the United States and Canada but also 15 other countries around the world. Jerry, with two associates, teaches 43 weeks a year for this course. He and his team will be accumulating input from the Bee Health guru app to make assessments and improvements – and, of course, trying to find answers to the newly-discovered information found. Now, in his retirement, he tries to stay at home in Missoula to enjoy the mountains of western Montana. But bees and their sounds, their language, their behavior and beekeepers worldwide will still be a part of his life.

Multistate beekeeping operations continue through pandemic. Beekeepers were in the midst of the almond pollination season when the COVID-19 pandemic began. Though they’ve had…