A couple of weeks ago I had the opportunity for the second year in a row to talk to about 100 third graders from one of the local elementary schools here in Medina. The kids go on a walking tour of our town as the end of the school year gets near. The A.I. Root Company/Root Candles is the last stop of their day. They land on our doorstep about 2:00 and we have them until 2:45 – so it’s a short talk.

Before I give my talk the kids watch a video that is about 10 minutes long on the history of the A.I. Root Company. Now I’ve watched this video probably at least a dozen times since it was created a few years ago. And each time I see it, it reminds me of what a very “cool” place this is to work. I’ve been around the Root Company off and on for almost 30 years and sometimes tend to take things for granted or maybe even start to complain a bit about one thing or another. But this video and these kids woke me up and reminded me of this history.

If you’ve never taken the time to read about Amos Ives Root I encourage you to do so. It’s a great story and he was a courageous, industrious man for his time. The video speaks about his interacting with the Wright Brothers and with Helen Keller.

And I love talking to kids because they ask such interesting questions. I talk to them for about 15 minutes just going over basics of what’s in the hive and then let them go with their questions. There’s always one little boy that has his hand up the whole time with 27 different questions. And there’s always one very shy little girl toward the back who’s hand goes up but not very far.

If you’re planning on coming to our Bee Culture event this year you’ll have the rare opportunity of getting a tour of the Root Candle factory – and that is very cool also. So make sure you sign up soon and get on our Friday list of tours. The space is limited as to how many we can take in a group, so register now! See you in September.

Kim spoke about the weather we’ve been having here in northeast Ohio. Hard on the bees and apparently detremental to the breeding of Call Ducks. I’ve had an order in for six baby Call Ducks since early April and the local feed store still has not been able to get them from the breeder. It’s very disappointing, but it has given me more time to spend with the baby chicks we got. We lost two when they were still very tiny. This seems to happen each time we get babies – we lose one or two. But nine are thriving, getting their feathers and will soon – weather permitting – be able to be out from under the warming lights and start getting to know the old girls. So we’re holding at 22, four that are five years old, nine that are two years old and nine babies. 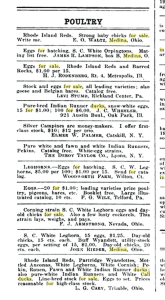 On a whim, because of my disappointment with not getting my ducks, I Googled ‘Call Ducks for sale in Medina, Ohio’ just to see what would come up. One of the links that came up was to the February 15, 1914 Gleanings in Bee Culture. A.I. had poultry for sale in his Classified Ad section. Can you believe that. A.I. sold a little bit of everything in the early days – washing machines, real estate, bicycles, seeds, fencing – and of course, bees and queens and honey and beeswax.

We’ve had so much rain this Spring and cold weather that it will seem like a miracle if we ever get dry enough to plant a garden. Good thing Kim started all of those plants by seed. I tried to mow this past weekend and everywhere I went with the tractor I was leaving squishy tire tracks. So I gave up that idea and spent the time picking up branches and sticks so when it is finally dry enough I’ll have a clear path. Along with the rain this Spring we’ve had  a lot of wind, so there are a lot of branches down. So far we haven’t lost any big trees, but others around us have. I usually don’t get to involved in discussions about climate change, but something is sure going on. Our weather is stranger every year.

It was 32° this morning, middle of May. That’s crazy. We’ve lost a small Japanese Maple and a Sourwood – I know Sourwoods really aren’t supposed to thrive in NE Ohio, but we have one that is well protected and doing OK.

I hope your Spring is going a little smoother than ours and that your bees are doing well.

We’re off to Florida this week and the following week to NY. Hopefully we’ll see some of you there.

Portal Brazil, with information Codevasf Beekeepers of Brejo Grande produce an average of 300 kg of pollen per month and attract buyers from several states…