Bee Audacious was a collaborative working conference that utilized dialogue to envision bold evidence-based ideas through which honey bees, other bees, beekeepers and pollination managers could prosper.

The meeting, held over three days (11-13 December 2016) at the Marconi Conference Center in Marshall, California, adopted the dialogue process pioneered at the Simon Fraser University Centre for Dialogue, and used lessons learned from the bees themselves.

Sessions alternated between facilitated breakouts with small groups of participants, and plenary reporting out/discussions with the entire conference.

The perspective that evolved during the meeting was that it is not business as usual today for bees, beekeeping and pollination, and current challenges will require some novel solutions. In that spirit, the conference attempted to develop audacious ideas that would not only inspire discussion among all those interested in the health and welfare of pollinators, but also respect the diverse interests and perspectives in the bee-related community.

The complete results of our deliberations were a rich set of bold, tangible and actionable proposals. Below I summarize some of the audacious ideas that generated the most interest during the conference:

Values Participants noted that concerns about bee welfare are often framed in terms of threats to human interests, such as economic impact, food security or production of goods such as honey or beeswax. Another central motivation for protecting bees should be our admiration for these unique and beautiful creatures. They discussed how bees are widely beloved and inspirational, even sacred in some cultures, and how this sentiment has often been expressed in art around the world. Further, bees contribute to a sense of well-being beyond material gain, strengthening social ties and building local communities.

Habitat Almost every session, no matter what the topic, touched on the essential importance of habitat for managed and wild bees. One core group of outcomes from Bee Audacious included many ideas to protect the integrity, diversity and overall health of the agricultural, natural, urban and in-between ecosystems upon which bees depend.

Pollinators require abundant and diverse forage, habitats free of toxic pesticides and appropriate sites for wild bees to nest and for managed honey bee apiaries to be located. For agro-ecosystems, one set of ideas emerged around effective lobbying to protect pollinators through upcoming revisions of the U.S. Farm Bill, as well as similar legislation in other countries. Lobbying might focus specifically on:

Another particularly striking outcome from our Bee Audacious conversations around habitat was the congruence between policies and programs that would benefit wild bees and those that would benefit managed honeybees. The shared interests between the wild and the managed were palpable, and bode well for creating the strongest possible alliances to protect all pollinators.

Pollination Consensus developed on the value of protecting pollinators and diversifying the bees and other species used for commercial pollination. To achieve the objectives of protecting and diversifying pollinators, intensive advocacy and education programs should be encouraged, everything from extension projects for farmers to sophisticated public education programs. Economic models need to be developed, specific to crops and regions, which demonstrate the financial viability and benefits for growers who implement pollinator-friendly practices. Technical support could be provided to advise farmers on their pollination options. A label, with accompanying certification, might be designed to inform consumers that their food purchases come from pollinator-friendly farms. Finally, closer collaboration between beekeepers, wild bee advocates and farmers could be targeted, with economic incentives for each to participate.

National Bee Corps Another audacious outcome from our conference was the exciting proposal to create a National Bee Corps across the United States and perhaps internationally, modeled after the Peace Corps. The Bee Corps would enhance extension/education for beekeepers, from the smallest scale hobbyists to the largest commercial operations. Its core objective would be to formulate and deliver programs that assist current beekeepers while educating the new generation of beekeepers that is expanding dramatically all across the United States and globally.

Participants favored a national-level Bee Corps that would provide significant federal resources to train professionals who would then fan out across the country and provide direct, local and hands-on services for beekeepers. Their network would be enhanced by developing core information about beekeeping, deliverable through web-based, social media and print options, using high-powered graphic and video presentation for clear, effective information delivery, and modified to suit local regions and a range of beekeeping styles.

Darwinian Beekeeping A number of ideas arose during Bee Audacious that reflected an increasing interest in better matching honey bee management practices with the natural biology of honey bee colonies. Indeed, it became clear during the conference that these ideas, well named as Darwinian Beekeeping, have reached the level of a not-yet-organized international movement.

We heard from beekeepers from around the world who are looking to the biology of wild honey bee colonies to redesign colony management, disease control and apiary geography. The essence of this bee-friendly beekeeping is to let the bees live as naturally as possible, making use of the adaptations that they have acquired over the last 30 million years. Darwinian beekeepers are willing to accept lower yields per colony and forego moving honeybees for pollination, in favor of improved colony health and survival as well as enhanced enjoyment for the beekeeper. Just a few of the management paradigms in this beekeeping philosophy include:

Darwinian beekeeping may be best suited to hobbyists or sideline beekeepers, but many elements in this management philosophy would be adaptable for commercial beekeeping as well.

New strategies to deal with diseases and pests Virtually all the participants agreed on the need to reduce the use of pesticides, antibiotics and fungicides in beekeeping. We also recognized that hobby and commercial beekeepers may take different approaches, and not all will be as comfortable with the speed and extent at which chemical use might be reduced.

Still, there was considerable support to take audacious steps towards reducing or eliminating chemical and antibiotic treatments against diseases and pests, while recognizing the need for commercial beekeepers to have tools they can use in the interim. There have been many reports globally about resistant bees, but there has yet to be a well-funded, widespread international effort towards selection and breeding for natural resistance.

Bee Audacious participants envisioned a well-coordinated international effort at a considerably broader scale than has yet been attempted. Breeding programs to date have been local, not always connected with hobbyist or commercial management needs and lacking the long-term funding through which successful stocks could persist. Partnerships with queen breeders would be essential, as would the research infrastructure to conduct robust, long-term and regionally focused projects to select and maintain successful stock long-term, and to support tech teams that transfer successful stock to hobby and commercial sectors.

Bee Audacious turned what are often sources of conflict into positives. Beekeepers and pollination proponents often face off to argue about which system is better, sometimes vehemently and occasionally personally. Dichotomies develop: top bar hives vs. Langstroth, honey bees vs. non-Apis bees, treating for Varroa mites vs. treatment-free, antibiotics for AFB vs. burning, hobby vs. commercial, migratory vs. stationary. 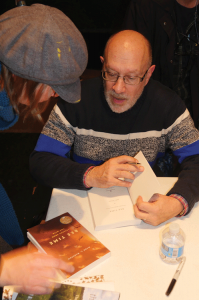 All these views were represented, yet in the dialogue format we learned to appreciate each other’s systems rather than criticize. It also became clear that there is very little reliable information, based on evidence from rigorous research, which would favor one system over another.

We addressed a number of specific tensions in the beekeeping and pollination communities, with some innovative bridge-building solutions emerging. For example, at times commercial migratory beekeepers and non-Apis bee proponents who support the ecological services of bees other than honey bees to pollinate crops have appeared to conflict. Yet, a consensus developed at Bee Audacious that a mixed pollination system that relied on habitat improvements to enhance wild bee numbers while also supporting managed honey bee colonies would be both resilient and economically viable for both beekeepers and farmers.

In another example, the conference addressed the tension between treatment-free beekeepers and those using pesticides and antibiotics. These groups have increasingly been in conflict; Treatment-free is perceived as contributing to pest outbreaks, while treating colonies is considered to interfere with the natural selection of resistant bees. The dialogue format of Bee Audacious allowed participants to respect the differences between these options while developing ideas for how both could thrive, perhaps by implementing geographic separation that encourages beekeepers to decide what they prefer in their locales.

Build alliances Perhaps the most audacious idea of all was to build an alliance of interests that could effectively lobby for pollinators. The raw material is there for a robust and powerful lobbying force. There has been a public upwelling of interest and concern around bees, but it has not yet been well organized. Similarly, there are copious organizations with direct or tangential interests in pollinator health, but they have not coalesced into an effective lobby.

The Bee Audacious conference was enthusiastic about the creation of a National Pollinator Association (NPA), a group under the broadest possible tent that would respect each organization’s individual mandates while working collectively to support broad areas of agreement around pollinator policy.

The groups that might collaborate together would include beekeeping and grass roots pollinator organizations, such as the American Beekeeping Federation, American Honey Producers, Eastern and Western Apicultural Societies, Project Apis m, local and state beekeeping associations and the groups that have emerged recently with interests in wild bee health, such as Seattle’s Pollinator Pathway, New York City’s Great Pollinator Project and the national Great Sunflower Project. Then there would be the non-profit organizations that are broadly advocating for pollinator health, such as the Pollinator Partnership, Bee City, Hives for Humanity, The Xerces Society and the Pollinator Stewardship Council.

A strong coalition should reach well beyond these pollinator-centric groups. Environmental organizations could be involved, such as the Sierra Club, Monarch Watch, Ducks Unlimited, Environmental Defense Fund, Centre for Food Safety, Centre for Biological Diversity, Friends of the Earth and Pheasants Forever. The sustainable and organic farming communities would be another set of natural allies; examples include the National Sustainable Agriculture Coalition, Organic Trade Association, Whole Foods, Costco and the Rodale Institute, among many others. Finally, there has been an urban food revolution in recent years with a focus on local food, municipal agriculture and farmers’ markets, a potentially powerful collection of consumers willing to support pollinator protection. Growing Power, Slow Food and Farm Folk City Folk are just a few organizations representing this field.

Dialogue Finally, and perhaps most significantly, Bee Audacious demonstrated that diverse perspectives can indeed come together and reach broad, effective outcomes that still respect individual and organizational interests. Sometimes the most audacious thing we can do is reach across the aisles that separate us to work collaboratively with those with whom we disagree.

In that way Bee Audacious taught us something considerably more important than the pollinator issues that brought us together. Civility is possible, and positive collaborative outcomes likely, when we rise to respectfully listen to each other above perceived differences.

We are our finest and most effective selves when solitary becomes communal. It is through collaboration that our future prosperity and the health of pollinators will be best assured.

(This report has been condensed from the Bee Audacious summary report. The full report can be found at http://beeaudacious.com/wp-content/uploads/2017/04/BA_Final_Reportv1.8.1.pdf).

Mark L. Winston is a Professor and Senior Fellow at Simon Fraser University’s Centre for Dialogue, and author of Bee Time: Lessons From the Hive winstonhive.com