Lyme Disease Lurks Out There 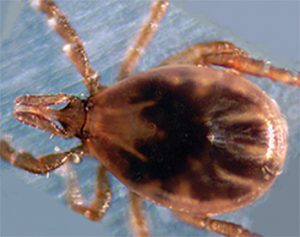 Despite all its pleasures, beekeeping also presents many potential risks and hazards. Besides being stung, beekeepers risk hurting their backs lifting heavy supers of honey, getting into poison ivy or poison oak in the beeyard, anaphylaxis and creating domestic disharmony by extracting honey supers in the kitchen. More recently for beekeepers, especially in the northeastern U.S., the increased risk of contracting tick born diseases has also become a real threat.

A number of pathogens have made their way north in recent decades thanks to our human induced warming of the planet and the resulting Northern migration of disease carrying insects and bugs. While incidents of mosquito transmitted West Nile Virus and Eastern Equine Encephalitis have become more common for example, Lyme disease has become by far the most common and is fast becoming an epidemic in some areas, such as the Northeast.

Lyme disease is named after Lyme, Connecticut, where recent records indicate an initial outbreak occurred. The disease was first recognized in the early 1970s after researchers investigated why unusually large numbers of children were being diagnosed with juvenile rheumatoid arthritis and other puzzling and debilitating health issues. Their symptoms included swollen knees, paralysis, skin rashes, headaches, and severe chronic fatigue. Visits with doctors and hospital stays had become all too common in Lyme, and two neighboring towns. The researchers discovered that most of the affected children lived and played near wooded areas where ticks live. They also found that the children’s first symptoms typically started in the Summer months, the height of the tick season. Several of the patients interviewed reported having a skin rash just before developing their arthritis. Many also recalled being bitten by a tick at the rash site.

Recently a Yale School of Public Health team of researchers found that the Lyme disease bacterium is actually ancient in North America, circulating silently in forests for at least 60,000 years – long before the disease was first described in Lyme, Connecticut. (Reitman 2017)

What is Lyme disease?

Lyme is an inflammatory disease typically characterized at first by a rash, headache, fever, and chills, and later by possible arthritis and possible neurological abnormalities, such as meningitis, encephalitis, and cranial neuritis. The Lyme disease causing bacteria transmitted by black legged ticks, (aka Deer Ticks) can also cause deadly cardiac disorders such as Lyme carditis.

After its initial discovery, further investigations in the 1980s by scientist, Willy Burgdorfer, discovered that the deer ticks were infected with a spiral-shaped bacterium or spirochete which was responsible for the outbreak of arthritis and numerous other health issues. This pathogen was later named Borrelia burgdorferi in Dr. Burgdorfer’s honor.

The Geography of Lyme

Lyme disease has been reported in every state in America except Hawaii, although in 2015 about 95 percent of all reported cases were concentrated in the northeastern states of Connecticut, Maine, New Hampshire, Massachusetts, New Jersey, New York, Pennsylvania, Rhode Island, and Vermont, significant numbers of cases have emerged in Delaware, Maryland, Virginia, Wisconsin, and Minnesota. (https://www.cdc.gov/lyme/stats/index.html) Infected ticks are also fairly numerous in some parts of Northern California, Oregon and Washington, as well as large areas of Asia and Europe.

The explosion of deer population in the 20th century into suburban landscapes, free of wolf predators and with strict hunting restrictions, allowed deer ticks to rapidly invade throughout much of New England and the Midwest. Warmer winters have also accelerated the ticks’ life cycle allowing them to survive an estimated 28 miles further north, and at higher elevations each year. Spring is the most active time of year for Deer Ticks, although they are mobile and energetic year-around except during sub-freezing weather.

Since a tick typically needs to be attached to you for about 48 hours in order to successfully transmit the disease, removing ticks early is key to disease prevention. Both nymphs (juveniles) and adult ticks can transmit Lyme disease-causing bacteria. As a result, it is highly recommended that beekeepers always check themselves over for ticks after returning from the bee yard.

Tick checks need to be thorough and done in a well-lit area. It is especially helpful if you can have someone help check you over, especially on your back. Look closely. Deer tick nymphs are small, not much larger than the period at the end of this sentence.

Ticks that have been attached and feeding for more than a day will become engorged with blood and bloated. Numerous tick removing devices are on the market to help remove ticks without leaving their head embedded in the skin which carries the risk of possible infection.

After years of checking myself and commonly finding ticks attached to me after a day in the bee yards, I have gotten used to the routine. However, one day this past May I overlooked a tick and didn’t find it until it was fully engorged and bloated. Within a couple weeks I got really sick with a headache, stiffness and soreness in my shoulders and neck, and experienced low energy levels. I also broke out in a blotchy rash all over my body. I spent about a week in bed with an initial fever of 102 which subsided to a low grade fever that didn’t seem to want to go away.

I went to see the doctor who took a blood sample and sent it away for testing. Given my symptoms and the fact that I had found a tick on me, we suspected Lyme and the test results confirmed it. We also tested for a number of associated diseases that ticks can also transmit and thankfully, the test results came back negative for them.

I immediately started taking a strong antibiotic, doxycycline, every 12 hours. I also went to an herbalist and started an herbal regimen that included tinctures of knotweed, astragalus, andrographis, cat’s claw, and sarsaparilla. I took both the antibiotic and herbal tinctures for a full 28 days and thankfully it seems to have worked.

Treating Lyme with antibiotics is widely accepted by the medical profession and has been largely successful, primarily for those with early-stage Lyme disease such as in my case. However, there continues to be heavy debate and controversy on the long-term use of antibiotics for treating Lyme that has progressed past the initial stages, or appears resistant to a course of antibiotics. So far there is no definitive cure for those who have developed late-stage Lyme.

The standard blood test that is usually done for Lyme detects the anti-bodies in your blood that the body produces in response to the infection. Unfortunately, once you have been infected, you will always have the antibodies in your system so you are unlikely to ever know if you have actually recovered. While culturing the actual Lyme spirochete to determine the presence of the disease would provide a more definitive answer, this process is costly and time-consuming, and therefore rarely done. At this point, the best confirmation anyone can expect that they have fully recovered from the disease is that they don’t continue to suffer from any of the symptoms associated with Lyme.

An ounce of prevention…

Aside from staying away from wooded areas and not walking through long grass, the preventive measures recommended for reducing the likelihood of getting bitten by a tick and catching Lyme disease are similar to those suggested for working with bees. They include wearing long-sleeved shirts and long pants that are light colored so that ticks are easy to spot should they try to crawl on you. Tucking your pants legs into your socks so ticks are unable to crawl up your leg is also recommended. While this may not be super fashionable, it is helpful in keeping ticks from easily reaching your skin.

The liberal use of a tick repellant of some kind is also helpful. While there are numerous repellants available, those who wish to avoid synthetic chemicals should stick to natural products that contain the essential oil of lemon-eucalyptus (sometimes also called Citron-Scent Gum) as this is the only natural essential oil that has been scientifically proven to actually work and is approved by the FDA for use in repelling ticks.

Herbalists also inform me that taking three dropper-fulls of knotweed and astragalus tincture each day during tick season can help make you unappetizing to ticks so they are less likely to want to feed on you. However, the use of herbs does not mean you can avoid having to do daily tick checks and removal before transmission can occur.

Even though Lyme is a rapidly increasing issue, beekeepers can continue to enjoy being out in the bee yard as long as they are aware of the problem and take appropriate steps to stay safe.

Ross Conrad is the author of Natural Beekeeping, Revised and Expanded 2nd Edition and will be a presenter at the Pennsylvania State Beekeepers Association 2018 Annual Conference in State College on November 2nd and 3rd.