I purchased some Aspinwall no swarm frames in the 1980s and today I thought that I would find a little about him. Get ready for an amazing adventure as you read about some of the Aspinwalls. 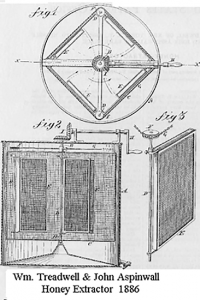 There was a person by the name of Lewis Aspinwall, who invented “Block Sheaves Friction Bushes or Boxes for the shives for blocks and for other purposes,” April 22, 1835. Lewis Aspinwall was from Albany, NY.  Unfortunately the patent office burned down in 1839 and all I have is a cursive copy of the patent.  I worked my way through the patent, transposing the cursive to print, to find that he was talking about casting metal. I found out that he was born in 1742, owned a bell foundry, married twice, had four children, moved to New York City, and died June 11, 1852. From the dates, I can tell that this Lewis Aspinwall is not the Lewis Aspinwall that I want to write about.

February 9, 1886, a patent was issued for a honey extractor invented by William B. Treadwell and John Aspinwall of New York. Again this is not the Aspinwall that I was looking for, but I wondered if he might have been Lewis’s father. The extractor was a four frame reversible.

There was a Captain John Aspinwall that served in the navy and had a son John Aspinwall Jr. who had seven children one of which was named John Lloyd Aspinwall.  It appears to have been also a different family.

Lewis Augustus Aspinwall was born in 1841 and died in 1930. He is buried in Woodland Cemetery in Jackson, Michigan. His wife’s name was Maude Fellows Aspinwall and she was born in Prairie Ronde, Michigan. The reason that I wanted to trace his linage was that he was granted at least 22 patents and I wondered just what he may have done to earn so much money to research and travel in Europe, and be able to file and be granted so many patents.

The patents that I found that he was granted are: 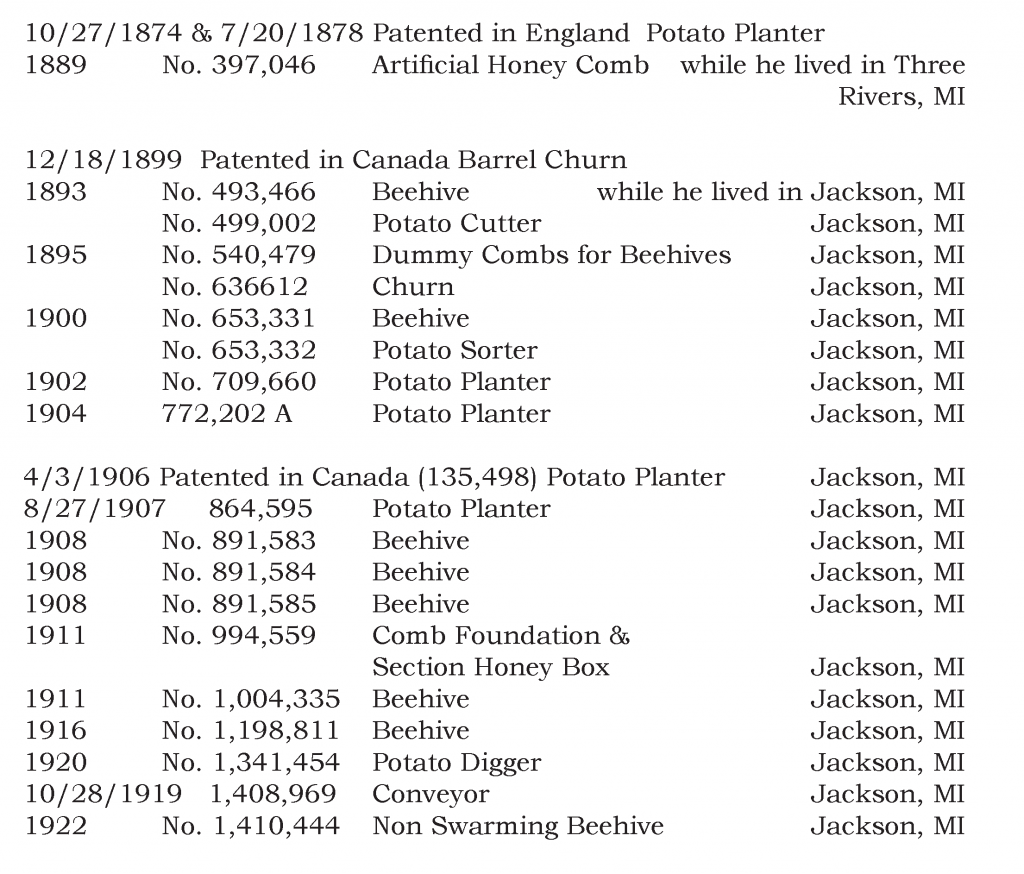 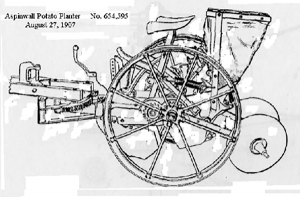 Planting potatoes before the invention of the Aspinwall potato planter was done all by hand and would take a crew several days to plant a good sized field. With the Aspinwall planter and a team of horses, one could plant and fertilize that same sized field in less time and with ewer people. Lewis Aspinwall spent nearly $20,000 traveling Europe studying potatoes and perfecting his machine before settling in Three Rivers, Michigan in 1884. The Three Rivers factory which employed thirty men was the only company in the world making a complete line of potato machinery at this time. Unfortunately, a fire destroyed the factory, and he moved the business to Jackson, Michigan in 1891.

The Aspinwall Manufacturing Company operated in Jackson, Michigan until 1921. In the early 1900s the Aspinwall Mfg. Company made about every type of machine related to raising the potato crop. (sprayers, cutters, sorters, diggers, etc.) A combination of increased competition and the agricultural depression of the early 1920s may have contributed to the company’s demise. In 1925, L.A. Aspinwall, at the age of 83 went to work for the McKenzie Manufacturing Company of La Crosse, Wisconsin.  Perhaps that was due to the fact that they had purchased his line of potato implements.  Aspinwall died in 1930, at the age of 88.

What is interesting to know is A.I. Root wrote or co-authored several ABC books. Some of the ABC books were  Tomato Culture – (1892), The ABC of Strawberry Culture – (1902), and The ABC of Bee Culture which was available in French, German, Spanish, and English.  His ABC of Potato Culture was published in 1911. So it is safe to say, A.I. knew Lewis Aspinwall very well as they also were into keeping bees.

The internet suggests that Lewis A. Aspinwall developed the no swarm frames for beehives in 1897.  Whereas I have found that he was patenting his artificial honey comb. He mentioned several types of materials that could be used but his patent was for the making of the comb out of a slab of end grained wood. All the holes would be bored to the same depth and diameter while being parallel to each other. 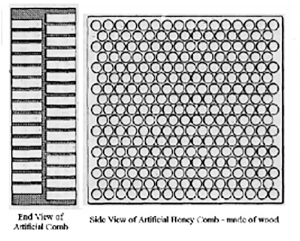 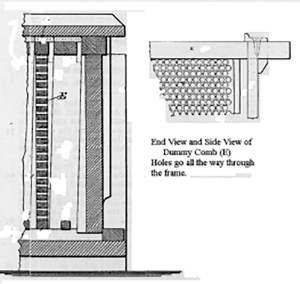 In 1895 Aspinwall developed the Dummy Comb for beehives. This was a frame that had holes drilled in it all the way through. He had discovered that the bees would not attempt to finish the frame and the use of this type of comb relieved some of the swarming tendencies. You might think of it as a follower board with holes.

In 1900, he had a no swarm frame. It was a frame that looked like a vertical queen excluder. The idea that he was trying to solve, was to remove the swarming tendency by tricking the bees into believing that there was more space within the hive. 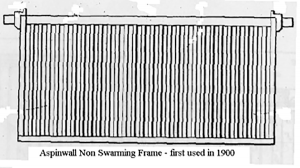 Bees produce swarms under two conditions, to reproduce or maintain the species and the result of overcrowding. We have specific names given to queen cells, supercedure cells and swarm cells. The natural movement of the mass of bees within the hive is up.  When they reach the top of the hive, they believe that they are out of room and so they tend to swarm. You might prevent the swarming if you reverse the supers early enough or add supers on top of the cluster of bees.  Aspinwall used three of his no swarm frames and empty comb to make the bees believe that there was some room laterally. He also used his non swarming hive with his frames. In a 1908 Bee Culture article, he concluded that his non swarming frames could not be used successfully in a hive with Langstroth or Hoffman frames because of the closed end frames and the propolizing that the bees would do. He also said that his non swarming frames could be moved three times faster than the Langstroth frames.

Now I don’t know about you, but I know what happens when I move frames or anything else faster when I am working bees. 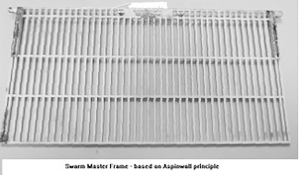 In the 1980s, I purchased some Swarm Master Frames based upon his non swarming principle. These frames were made of plastic and according to the directions were placed in between the regular brood frames. Yep the hive didn’t swarm. It seems that the non swarming frames prevented the queen from moving from frame to frame as easily and the result was that the hive just never got up to strength to swarm. If I recall correctly, they didn’t produce much of anything. 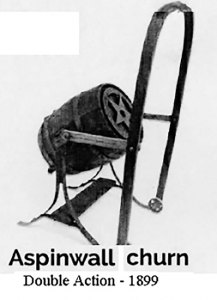 I have noticed that there is/was a product on the market in 2012 called Comb Forms that made reference to non swarming frames, but I have never seen it available from any bee supplier.

The butter churn developed by L.A. Aspinwall, seems to have been a strange item for him to make, but I wonder if the invention of the four-frame extractor by William Treadwell and John Aspinwall led to its development. Or maybe the Aspinwall Churn led the Standard Churn Company of Wapakoneta, Ohio to patent and make honey extractors. They were issued patent 1,825,020 in 1931 for a three frame extractor, but they also made a green two frame, galvanized, hand crank model.