I don’t want to dwell on loss for a second month, but there are increasingly good studies recently that take the long view on what causes colonies to fail between Fall and Spring. Such colonies are in good company. In the U.S. and many temperate countries, overwinter losses remain stubbornly high. There must be an explanation there, or perhaps several. As the lab fundholder, it pains me that even here we have to shell out for packages every Spring (and I LIKE the guy we get packages from).

As with other times of year, unwarranted Winter losses (e.g., colonies that went into Winter with sufficient stores and numbers to have a chance of surviving) likely reflect a mix of stresses. Marco Beyer and colleagues describe their search for the most important of those stresses in an upcoming paper from Research in Veterinary Science (https://doi.org/10.1016/j.rvsc.2018.01.012). By diligently following hives via repeated surveys across four years (1364 ‘hive-years’ in total) they were able to tease apart trends related to both mite treatment strategies and climate. Interestingly, both this study and the Austrian study by Matthew Switanek and colleagues I highlighted last Spring (http://dx.doi.org/10.1016/j.scitotenv.2016.11.178), found that warm Winters correlate with higher Winter losses. Whether that is due to maladaptive choices by queens or workers, a failure to recluster in cold snaps, or a more favorable environment for pests and parasites is unclear. Whatever the proximate cause, the impacts of warm Winters were fairly sudden. Both studies found that warm December and January temperatures were a solid predictor of colony death the very same Winter. In addition, both studies showed believable trends between inopportune rainfall and colony losses (e.g., rainy July’s led to higher colony losses while rainy Septembers favored colony overwinter survival. 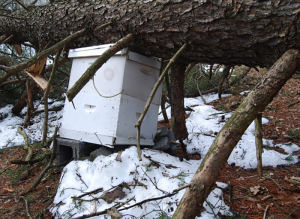 Lest this seem like a slam dunk for the effects of climate on overwintering success, the authors found that mite treatment regimes by surveyed beekeepers had an equally large impact on overwinter losses. In particular, they identified a strong difference in overwintering success based on the strength of formic acid used to treat colonies. Colonies receiving a 60% formic acid treatment tended to fare poorly in this survey while those given a greater mite shock (85% formic acid) survived much better. Unfortunately, they do not couple this observation with data on actual mite loads, and they make clear that the weaker formic treatments might have been applied differently, but on the whole the differences were striking. The next strongest predictor of high colony survivorship came for beekeepers using oxalic acid midwinter, although this by itself was not enough to significantly decrease losses.

In another fresh paper from the Journal of Apicultural Research, Philip Brown and colleagues attempt to determine drivers of colony loss in New Zealand (https://doi.org/10.1016/j.rvsc.2018.01.012). Thanks perhaps to the allure of pricey honey, New Zealand colony levels have tripled in the past 10 years and are six times higher than they were in the 1940s a sharp contrast with the U.S. where bee numbers have declined substantially in that same time frame. Another reason for the great interest in beekeeping there might be that New Zealanders have not full met the heartache of loss, with average loss rates near ten percent (sigh). Varroa and Nosema ceranae are features on both of the major New Zealand islands but seem not to have the same impacts yet. In fact, on the side of arthropod pests, key threats identified in the study included wasps and an aphid! (ok, not the world’s first bee-attacking aphid but the giant willow aphid which, true to its name, damages an important pollen source).

Back to the Northern hemisphere, expanding data coming from the Bee Informed Partnership continues to show a connection between mite control or the lack thereof with both overwinter and yearly losses. The always-improving survey app at https://bip2.beeinformed.org/survey/ takes the work out of pouring over their growing treasure trove of data. As in past years, mite treatments, and amitraz in particular, are tied with better fates. Interestingly, only 25/234 respondents who were commercial beekeepers did NOT use amitraz in 2016 and 2017 combined, but for those 25, loss rates were equal to those using amitraz. All other classes of beekeepers showed significantly higher losses if they skipped using amitraz. Solid surveys from the equally stricken (> 30% losses) Netherlands also show mites to be the greatest factor, with pesticides in honey and the presence of canola pollen skating into the silver and bronze spots. Romée van der Zee (e.g., e0131611. doi:10.1371/journal.pone.0131611) continues to rally good survey numbers in that country, as part of the global Colony Loss Network (www.coloss.org).

So, how can these survey results help you? For one, they are only strong when everyone takes part, so be sure to reply (in the U.S.) to both the BIP survey and the USDA’s National Agricultural Statistics Service survey on colony health. And keep perusing their results to compare with your own experience. The results are free and continue to provide good insights into managing bees. You can’t change the weather (as individuals), but you can react to it smartly and there are other risks that are more easily addressed.