An Opportunity You Will Never Get Again!

Listen as four very different commercial beekeepers share how they spend their year; telling us, in their own words and pictures “MY STORY.” Sit back and relax as each fascinating guest spends ½ a day explaining their operations, where they have been and where they are going. 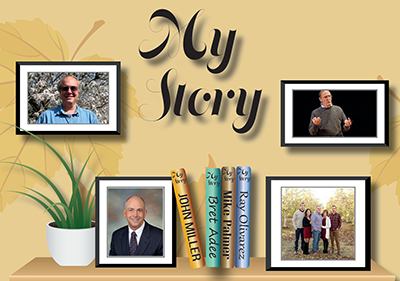 Bret Adee – With locations in California, South Dakota, Nebraska, Adee Honey Farms is probably the worlds biggest beekeeping operation.  Adee Honey Farms pollinates primarily almonds in California, but also travel to pollinate cherry and apple trees in Washington and Oregon. On top of that they also produce millions of pounds of honey each year. Follow all those bees for a whole year to see how the biggest makes it work.

Mike Palmer – Mike specializes in the Sustainable Apiary using production colonies, nucleus colonies and mating nucs. That strategy gives him enough bees to produce Vermont’s prime comb honey and sell queens and nucs to others in the area. He isn’t one of the largest but he is one of the best. Learn the how’s of this northern, non-migratory beekeepers success story.

John Miller – John owns Miller Honey Farms which is based in Blackfoot ID but also has locations in Gackle, ND and Newcastle, CA. Like many commercial beekeepers, John trucks his bees to several states for pollination but what John does differently from most is he winters his bees in advanced wintering buildings in North Dakota; something which is virtually unheard of in the commercial beekeeping industry. Come listen to how he makes it all come together into a successful operation.

Ray Olivarez – Carefully chosen locations in Northern California, Montana and Hawaii’s Big Island allow Olivarez Honey Bees to offer customers premium-quality queens and bees year-round.  OHB is surely one of the largest package and queen providers in the US with specialty climate controlled trailers that allow them to truck packages across the country. In addition to selling queens and packages, Ray’s team also provides almond pollination and produces honey.  To top it all off they offer a retail store to die for and host a large “Hobby Day” every spring. Sure to be a fascinating 4 hours hearing just how they do it the OHB way.

Registration begins May 1  and space is limited so don’t wait!