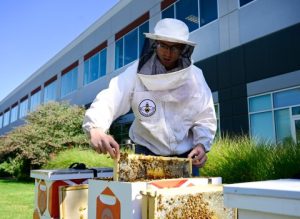 IBM, Google and other corporations are dedicating budget lines to saving Colorado’s bee population, with hives at their in-state locations, in a business move that supports a critical part of the nation’s food-production system.

The number of honeybee hives in the U.S. has dwindled to around 2.5 million last year from 6 million in the 1940s, the Agriculture Department reported. As the state with the fifth-most bee diversity in the nation, Colorado is home to around 950 bee species, which put in work to pollinate both agricultural crops and native plants.

Without them, systems that humans rely on every day would suffer, including the food supply and ecosystems that provide clean air and stable soil. One solution: Supporting colonies wherever possible — from the average American’s backyard to a corporation’s rooftop.

“Our beehive investment in Colorado is part of IBM’s overall commitment to environmental sustainability,” said spokesperson Carrie Bendzsa. “Pollinators play an important role in maintaining a diverse ecosystem and small efforts like these can have a truly meaning impact on pollinator well-being.”

IBM’s formal commitment to environmental sustainability dates back more than 50 years ago with a corporate environmental policy, Bendzsa added in a statement. She highlighted conservation and biodiversity as corporate values.

They aren’t the only ones paying attention to pollinators on local and national scales. Giant Eagle, Walmart and Whole Foods ranked as the top three U.S. grocery stores taking steps to address pesticide use, which can present risks to both bees and people, according to Friends of the Earth’s Bee-Friendly Retailer Scorecard.

On top of pesticides, threats to bees also include climate change and an invasive mite, said John Rosol, co-founder of Free Range Beehives.

“We do still need to save the bees,” he said. “In Colorado alone, managed hives lose 42% of their colonies every single year, and that’s not a sustainable number.”

His company works with around 15 clients, taking care of almost 70 hives in the field. Around July and August when the hives reach their peaks, they each host between 50,000-60,000 bees.

“We put the bees at the site,” Rosol said. “We maintain them, we own them and the client gets to keep them as long as they want.”

Rosol described beekeeping as a “locality-dependent profession,” with climates and seasons affecting the insects in different ways. For instance, the Centennial State differs from California or Texas because of its harsher, longer winters and shorter growing seasons.

The state has a strong beekeeping community, with the Colorado Department of Agriculture highlighting “a large number of hobby beekeepers,” or those with less than 150 hives. Rocky Mountain Bee Supply at 24 S. Walnut St. in Colorado Springs supplies beekeepers with bees, hives, supplies and more, while To Bee or Not To Bee at 8280 West Coal Mine Avenue #16 in Littleton offers beekeeping classes and supplies.

Free Range Beehives was founded in 2020 by two father-son pairs. Not only does the team install and regularly inspect the beehives, but it also offers educational presentations, hive tours and honey extraction from the colonies for their clients’ employees to take home.

“Companies are using this as an effort to demonstrate to their employees and to the communities and to the state that they do business in that they’re good stewards of the environment,” said Free Range Beehives’ co-founder Dave Mathias.

So far, Free Range Beehives has chosen to remain in Colorado, with a short-term aspiration of maintaining pollinator populations from southern Colorado up to Fort Collins. Mathias noted they’re “pretty close to achieving that.”

Into the future, “our goal is to get as large as we can, so that we can have maximum impact,” Mathias said, listing Arizona, Utah, Idaho and Missouri as potential options for regional expansion.

Ultimately, though, their mission comes back to the bees.

“When you consider that one out of three bites of food that the average person eats is pollinated by a bee, the importance to our food supply and to our very existence as humans in quite literally dependent upon the bees thriving,” Mathias said.

We are here to share current happenings in the bee industry. Bee Culture gathers and shares articles published by outside sources. For more information about this specific article, please visit the original publish source: Colorado’s industry giants make room for beekeeping, save the population (denverpost.com)