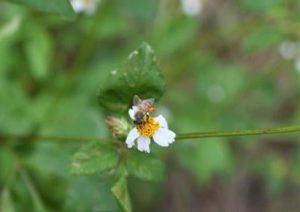 European honey bees are even now foraging the landscape for nectar and pollen sources. This bee is carrying a load of red pollen under its wings while collecting from Spanish needles (Bidens alba) blooms. Les Harrison / For the News

As the days shorten and cool, a few insects remain just as active as they were six months ago. All spent their days searching for the diminishing food supplies in preparation for the inevitable.

Chief among these hardy six-legged creatures is the European honey bee. The social insect with a matriarchal home life is still active and buzzing around Wakulla County and the vicinity.

They can be encountered in late blooming ornamentall in home landscapes or in the pastures or fields where wildflowers bloom. Each and every autumn bloom holds the potential for resources to keep the hive going during the meager winter days.

European honey bees are the most commonly known pollinators, and considered by many to be highly effective when swarms are present. While honey is a popular byproduct of their presence, their most valuable contribution is pollination services.

Currently the worker bees, all female, are scouting near and far for tidbits of nutrition. The drones, all males, are being forced out of the hives and left to their fate, always fatal.

The sorority of insects caters to their relatively long-lived queen and the brood in the hive’s incubation cells. Responsible for replenishing the hive’s population, the queen can live several years.

The workers lives are measured in weeks. Their entire existence is spent in service to the hive during a season.

The Discovery was one of three ships used to found Jamestown, Virginia, and its likeness is displayed on the 2000 quarter dollar coin’s reverse, minus the honeybees.

Soon, likely the spring following their arrival in Jamestown, some of the European honey bees escaped into the wild and established new hives. Hollow trees were quite popular hive locations, offering the colony room and protection from animals which preyed on insects and their larva.

The hive-splitting process is normal behavior for honeybees in the spring, especially when they have outgrown their current residence. A new queen is produced, and she leads some of the swarm to a new residence.

Sometime the departing swarm will temporarily stop on a tree bough. If the area offers shelter and promise, they will stay. Commonly, it is just a rest stop to assess the area, and then the swarm moves on after thorough site examination results in rejection.

The European honey bees are completely oblivious to human occupation when selecting an area to assess for colonizing. The rest stop may be in the forest, a yard within a subdivision, or a parking lot full of cars.

For the uninitiated, the seemingly sudden visit by European honey bees may be a bit disconcerting. These insects will closely buzz by anyone or anything venturing too near to the swarm. Perfumes and colognes will attract some additional attention from the bees seeking flowery prospects.

But the purpose of the feral swarm’s rest stop is to assess the area, not terrorize the vicinity’s residents. Their objective is to evaluate food availability and a safe hive site, and by default improve the pollination process for most of the plants in the area.

While the early Jamestown residents did not recognize the value of their honeybee pollination services, modern agriculture does. Billions of, if not more, European honey bees are trucked cross country annually to pollinate such diverse crops as almonds, blueberries, watermelons, and many other commercial crops.

Their persistence is a good thing because so many plants that provide food to people are dependent on these agile flyers for species continuation.

To learn more about pollinators in Wakulla County, contact your UF/IFAS Wakulla Extension Office at 850-926-3931 or http://wakulla.ifas.ufl.edu/.

We are here to share current happenings in the bee industry. Bee Culture gathers and shares articles published by outside sources. For more information about this specific article, please visit the original publish source: European honey bees crucial to the environment | Local News | chronicleonline.com