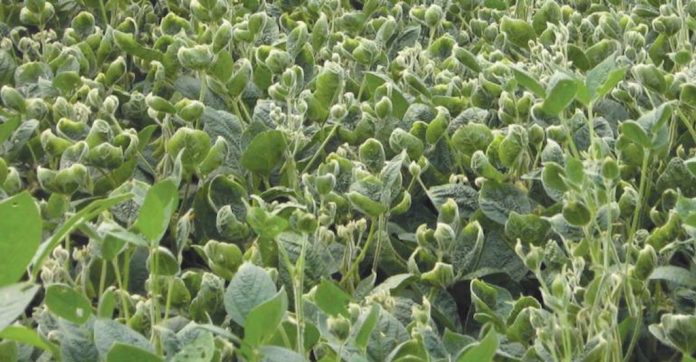 Soybeans showing the cupped leaves, which are a symptom of dicamba injury. (Photo: University of Arkansas Research and Extension)

COLUMBUS — New restrictions the U.S. Environmental Protection Agency has put on the herbicide dicamba aren’t enough to prevent it from spreading onto nearby plants, according to an Ohio State University weed expert.

Dicamba has been shown to spread beyond the fields where it was sprayed, damaging or killing crops and in some instances harming beehives. Nationwide, there have been complaints and lawsuits, claiming damages.

On Oct. 31, the Environmental Protection Agency announced it would continue to allow farmers to keep using dicamba until at least December 2020. The agency required changes to the label that detail additional stipulations on when and how to use the weed killer to try to protect nearby fields.

The new EPA regulations include the following:

“What (the EPA has) done is to try to make changes to prevent dicamba from moving around into other places,” said Mark Loux, a weed specialist with Ohio State University Extension. But those changes aren’t enough, he said.

Even with the added EPA restrictions, dicamba could still go airborne and spread to other plants that it was not intended to kill, Loux said.

“The weed science community is pretty unhappy, and doesn’t believe these EPA regulations are really going to help much,” he said.

New regulations include the prohibition of using dicamba on soybeans more than 45 days after planting, specifying certain times of the day dicamba can be applied, and clarifying who is authorized to apply it. These regulations don’t have Loux or the weed science community convinced.

“There is some question as to whether 45 days actually does anything,” he said.

Loux and colleagues from Purdue University and the University of Illinois have created a list of additional precautions that farmers should try to follow whenever they use dicamba.

The additional recommendations from Loux and his colleagues include not applying dicamba if the temperature is warmer than 80 degrees or if the forecast indicates wind gusts over 10 miles per hour.

The recommendations also say that farmers should apply dicamba early in the season around the time of crop planting, or soon after the emergence of the crop and weeds.

They also suggest that farmers talk to their neighbors before applying dicamba so that farmers know what plants are nearby that could potentially be affected by any spread of dicamba.

“We think our recommendations will help,” Loux said, “but not guarantee against dicamba moving from the area where it was applied and injuring or killing plants that were not supposed to be affected.”

To view the full list of recommendations on dicamba use from Loux and his colleagues, visit: go.osu.edu/dicambatips.