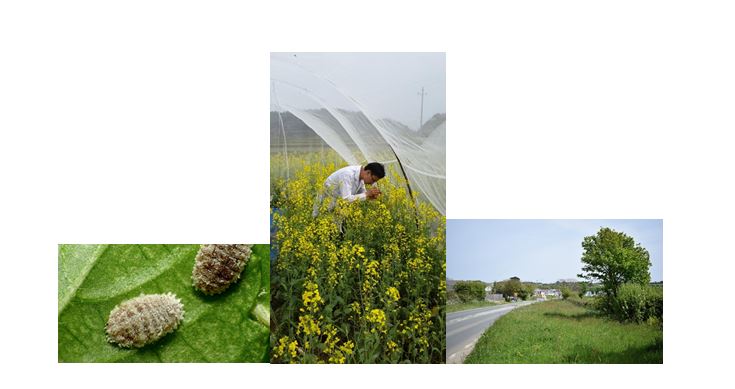 According to a new study, neonicotinoids can kill beneficial insects such as honey bees, hoverflies, and parasitic wasps by contaminating honeydew, a sugar-rich liquid excreted by certain insects.

Researchers already knew neonicotinoids could harm honey bees and other beneficial insects when applied to important crops such as cotton, potato, and citrus. A 2017 study, for example, found the chemicals can poison bees, causing symptoms like paralysis, vomiting, or death when they eat contaminated nectar or pollen, or even crawl over sprayed surfaces. Yet neonicotinoids still account for more than 20% of the world’s insecticide market.

In the new study, scientists wanted to see whether the chemicals could harm these and other insects more indirectly. They looked to the invasive mealybug (pictured), a 6-millimeter-long insect that eats plants typically contaminated with pesticides. As they nosh, the bugs excrete a sticky substance called honeydew, which pollinating insects like hoverflies and parasitic wasps consume.

The scientists applied two of the most commonly used neonicotinoid insecticides (thiamethoxam and imidacloprid) to clementine trees grown in a greenhouse. They added the chemicals to the soil in one group and sprayed it on leaves in another, mimicking the ways farmers control pest infestations today. The team sprayed a third group of trees with distilled water as a control. Then they infested the trees with mealybugs and fed their resulting honeydew to hoverflies and parasitic wasps.

All of the hoverflies that ate honeydew from trees sprayed with thiamethoxam died within 3 days, while just 10% of the control group died, researchers report today in the Proceedings of the National Academy of Sciences. In the soil-treated trees, nearly 70% of the hoverflies died from the same chemical, compared with about 14% in the control group. More than half of the wasps also died after eating honeydew from the soil-treated and sprayed trees (with thiamethoxam), whereas less than 20% died in the controls.

The study suggests honeydew could be another way beneficial insects are exposed to deadly insecticides. This can devastate more insects across the food web than nectar contaminated with insecticides could, the team says, because honeydew is more abundant, especially in agricultural fields.

Adjuvants are chemicals that are commonly added to plant protection products, such as pesticides, to help them spread, adhere to targets, disperse appropriately, or prevent drift, among other things. There was a widespread assumption that these additives would not cause a biological reaction after exposure, but a number of recent studies show that adjuvants can be toxic to ecosystems, and specific to this study, honey bees. Jinzhen Zhang and colleagues studied the effects on honey bees when adjuvants were co-applied at “normal concentration levels” with neonicotinoids. Their research, recently published in Environmental Toxicology and Chemistry, found that the mixture of the pesticide and the adjuvant increased the mortality rate of honey bees in the lab and in semi-field conditions, where it also reduced colony size and brooding.

When applied alone, the three pesticide adjuvants caused no significant, immediate toxicity to honeybees. However, when the pesticide acetamiprid was mixed with adjuvants and applied to honeybees in the laboratory, the toxicity was quite significant and immediate. In groups treated with combined pesticide-adjuvant concentrates, the mortality was significantly higher than the control groups, which included a blank control (no pesticide, no adjuvant, only water) and a control with only pesticide (no adjuvant). Further, flight intensity, colony intensity and pupae development continued to deteriorate long after the application comparative to the control groups.

Zhang noted that this study, “contributed to the understanding of the complex relationships between the composition of pesticide formulations and bee harm,” and stressed that “further research is required on the environmental safety assessment of adjuvants and their interactions with active ingredients on non-target species.”

Roadside verges provide a vital refuge for pollinators – but they must be managed better, new research shows.

With many pollinator species in decline, the University of Exeter study shows verges can provide food and a home for pollinators such as bees, butterflies and hoverflies.

But the study emphasises that not all verges are equal. It found pollinators prefer less busy roads and areas deeper into verges.

It also found that cutting verges in summer, which removes wildflowers, makes them useless for pollinators for weeks or even months.

“Road verges can provide a fantastic home for wildflowers and pollinators, which is often lacking in our vast agricultural landscapes,” said lead author Ben Phillips, of the Environment and Sustainability Institute on Exeter’s Penryn Campus in Cornwall.

“But management is key – some road verges need to be cut for safety, but at the moment we cut far more than we need to.

“Most verges are cut in summer – the peak of flowering – but where possible they should be left until autumn, when pollinators are less active.

“Our results show that the part of the verge within two metres of the road contains the fewest pollinators.

“This is often the most important part to cut for road safety and visibility, so where possible only this part should be cut in summer.”

A campaign by conservation charity Plantlife to save wildlife on road verges includes a petition signed by more than 70,000 people.

With 97% of wildflower meadows lost since the 1930s, the new study emphasises the vital role that road verges could play in conserving pollinators and other wildlife.

The study, carried out in collaboration with the NERC Centre for Ecology and Hydrology, was funded by the Natural Environment Research Council and the Cornwall Area of Outstanding Natural Beauty unit.

The paper, published in the Journal of Applied Ecology, is entitled: “Road verges support pollinators in agricultural landscapes, but are diminished by heavy traffic and summer cutting.”