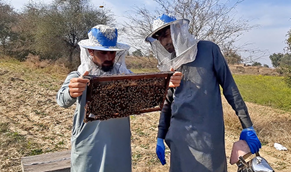 Beekeepers work on beehives in the Chakwal area of Pakistan’s populous Punjab province,. (AN photo by Aamir Saeed)

ISLAMABAD: When Ameer Ahmed set up his bee farm as a part-time business with 30 beehives last year, the 22-year-old university student did not expect to turn the trade into a full-time job after making hefty profits.

Today, he has 100 beehives on his farmland in the Chakwal area of Pakistan’s populous Punjab province, and earns between $13,000 and $16,000 annually, mainly by exporting honey to countries in the Middle East, including Saudi Arabia and the UAE.

“This is an easy and profitable business as one can start it without getting any formal skills and education,” Ahmed told Arab News.

He is among a growing legion of unskilled laborers, students and growers in remote areas of the country who are turning to beekeeping as a profitable source of income since it requires minimal capital and skill.

“I am encouraging my friends to get into this business, too,” Ahmed said, adding that he had to hire two workers to look after his growing apiary.

Commercial beekeeping is fast becoming a thriving business in Pakistan’s rural areas, providing new job opportunities for thousands of men and women, and helping the country earn foreign exchange through exports, mainly to Middle Eastern countries, according to researchers and honey traders.

The business is growing in the Chakwal, Jhelum, Attock and Sargodha districts of Punjab province, some parts of Azad Kashmir and Gilgit-Baltistan, and the Khyber Pakhtunkhwa province, which have areas suitable for the exotic bees.

The South Asian nation currently produces around 7,500 metric tons of honey annually, with more than 8,000 beekeepers rearing exotic species in 1 million beehives, according to the government’s Honeybee Research Institute in Islamabad.

Around $6 million in foreign exchange is earned annually through honey exports to Saudi Arabia, the UAE and Kuwait.

The government estimates the project will help generate around 43 billion rupees ($268 million) for the national economy and provide about 87,000 green jobs.

Under the program, the government has pledged to increase the plantation of specific trees and flora to improve the quality and production of honey and grant interest-free loans to traders.

Raza Khan, president of the All Pakistan Beekeepers Trade and Exporters Association, said Pakistan was producing “100 percent organic” honey through modern bee farming, and demand was increasing, particularly in Middle Eastern countries such as Saudi Arabia, the UAE and Kuwait.

In the 2018-2019 financial year, Pakistan exported honey worth 966 million rupees ($5.8 million), about 260 million rupees more than the year before, according to the Honeybee Research Institute.

Industry insiders predict the numbers will keep going up as the country’s beekeepers benefit from Pakistan’s push to reforest the land under its “10 Billion Tree Tsunami” project, launched in 2018.

“Our honey is unique in the world for its natural taste, color and texture,” Khan said. “Its demand abroad is growing fast,” he added, urging the government to provide more incentives to boost the business and grant industry status to commercial beekeeping.