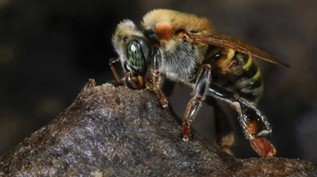 Scientists say a new species of pollinating bee has been discovered on a farm in the central Brazilian province of Goiz.

Named ‘Ceratina fuoresana’ because it belongs to the family Ceratinula, the species was discovered in the Fasenta nosa Senhora aparecida by researchers from Bayer Forward Farming’s Agricultural Practices Project in Agua Fria, about 150 km from Brasilia.

Heber Luis Pereira, a pollinator at the Institute of Biology at the University of Bahia, and bee taxonomist Favicia Freidas de Oliveira identified the species as part of a group known as “small carpenter bees.”

The study, which began in 2017 and allowed the identification of 72 Brazilian species in soybean, bean and wheat crops, has already been published in the scientific journal Jukees, an international reference journal in the fields of zoology, taxonomy, phylogeny and biogeography.

“Among the samples used to assess the diversity of pollinators, we found some specimens of new organisms, which we began to study independently,” explained Favicia Freidas de Oliveira.

The new species of bee, found mainly in the ecological conservation area of ​​the farm, differs from the other 15 members of the Seratinula family listed in Brazil by its visible yellow spots on the face, legs and genitals.

According to Claudia Guaglerini, tropical intelligence manager at Bayer Brazil, the company’s science division, the discovery strengthens more than 30 years of “harmonious coexistence” between bee pollen and sustainable agriculture in the same area.

“Through pollination, bees can function to achieve a better result in terms of productivity,” he concluded.