Researchers discover that neonicotinoid seed treatments are driving a dramatic increase in insecticide toxicity in U.S. agricultural landscapes, despite evidence that these treatments have little to no benefit in many crops. 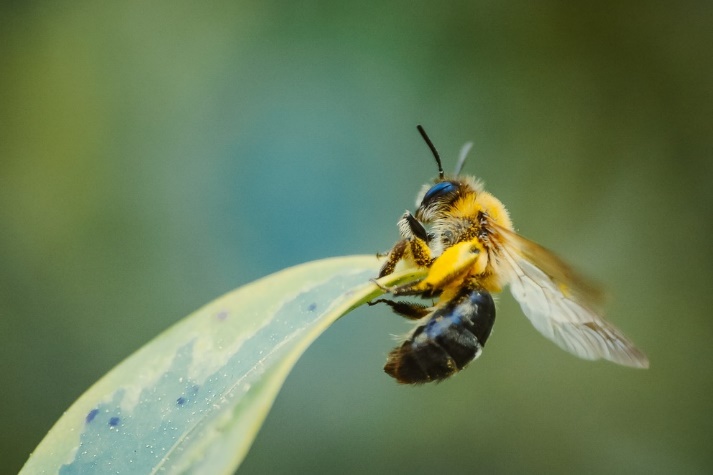 Researchers found that insecticide toxicity has increased over the last 20 years.

UNIVERSITY PARK, Pa. — During the past 20 years, insecticides applied to U.S. agricultural landscapes have become significantly more toxic — over 120-fold in some midwestern states — to honey bees when ingested, according to a team of researchers, who identified rising neonicotinoid seed treatments in corn and soy as the primary driver of this change. The study is the first to characterize the geographic patterns of insecticide toxicity to bees and reveal specific areas of the country where mitigation and conservation efforts could be focused.

According to Christina Grozinger, Distinguished Professor of Entomology and director of the Center for Pollinator Research, Penn State, this toxicity has increased during the same period in which widespread decline in populations of pollinators and other insects have been documented.

“Insecticides are important for managing insects that damage crops, but they can also affect other insect species, such as bees and other pollinators, in the surrounding landscape,” she said. “It is problematic that there is such a dramatic increase in the total insecticide toxicity at a time when there is also so much concern about declines in populations of pollinating insects, which also play a very critical role in agricultural production.” 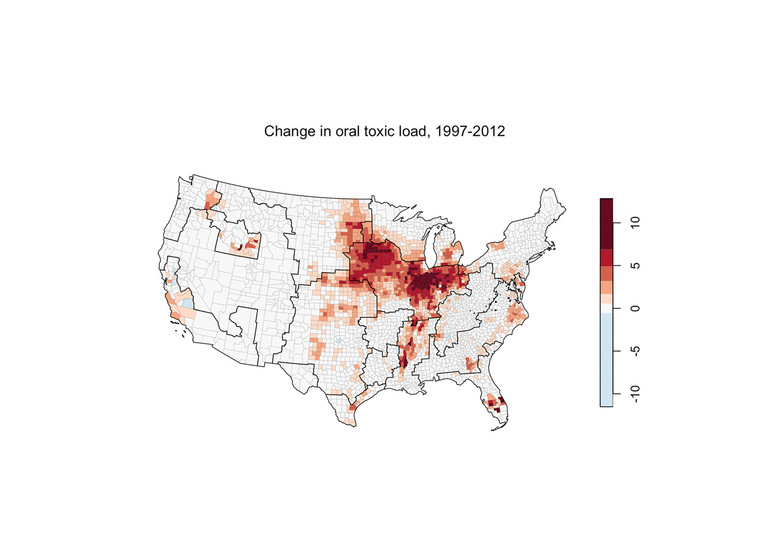 Oral-based bee toxic load increased by ninefold, on average, across the U.S. This pattern varied by region, with the greatest increase — 121-fold — seen in the Heartland, which the U.S. Department of Agriculture defines as all of Iowa, Illinois and Indiana; most of Missouri; and part of Minnesota, Ohio, Kentucky, Nebraska and South Dakota. The Northern Great Plains had the second highest increase at 53-fold. This region includes all of North Dakota and part of South Dakota, Nebraska, Colorado, Wyoming, Montana and Minnesota.

The researchers, led by Maggie Douglas, assistant professor of environmental studies, Dickinson College, and former postdoctoral fellow, Penn State, integrated several public databases — including insecticide use data from the U.S. Geological Survey, toxicity data from the Environmental Protection Agency, and crop acreage data from the U.S. Department of Agriculture — to generate county-level annual estimates of honey bee “toxic load” for insecticides applied between 1997 and 2012. The team defined toxic load as the number of lethal doses to bees from all insecticides applied to cropland in each county.

The team found that the pounds of insecticides applied decreased in most counties from 1997 to 2012, while contact-based bee toxic load remained relatively steady. In contrast, oral-based bee toxic load increased by ninefold, on average, across the U.S. This pattern varied by region, with the greatest increase — 121-fold — seen in the Heartland, which the U.S. Department of Agriculture defines as all of Iowa, Illinois and Indiana; most of Missouri; and part of Minnesota, Ohio, Kentucky, Nebraska and South Dakota. The Northern Great Plains had the second highest increase at 53-fold. This region includes all of North Dakota and part of South Dakota, Nebraska, Colorado, Wyoming, Montana and Minnesota.

“This dramatic increase in oral-based toxic load is connected to a shift toward widespread use of neonicotinoid insecticides, which are unusually toxic to bees when they are ingested,” said Douglas.

The most widely used family of insecticides in the world, neonicotinoids are commonly used as seed coatings in crops, such as corn and soybean. Some of the insecticide is taken up by the growing plants and distributed throughout their tissues, while the rest is lost to the environment.

“Several studies have shown that these seed treatments have negligible benefits for most crops in most regions,” said Grozinger. “Unfortunately, growers often don’t have the option to purchase seeds without these treatments; they don’t have choices in how to manage their crops.”

The researchers suggest that the common method of evaluating insecticide-use trends in terms of pounds of insecticides applied does not give an accurate picture of environmental impact.

“The indicator we use — bee toxic load — can be considered as an alternative indicator in cases where impacts to bees and other non-target insects is a concern,” said Douglas. “This is particularly relevant given that many states have recently developed ‘Pollinator Protection Plans’ to monitor and address pollinator declines. Ultimately, our work helps to identify geographic areas where in-depth risk assessment and insecticide mitigation and conservation efforts could be focused.”

“It is important to note that the calculation of bee toxic load provides information about the total toxicity of insecticides applied to a landscape,” said Grozinger. “It does not calculate how much of that insecticide actually comes in contact with bees, or how long the insecticide lasts before it is broken down. Future studies are needed to determine how toxic load associates with changes in populations of bees and other insects.”

This research is part of a larger project to investigate the various stressors impacting pollinator populations across the United States. One tool created within this research project is Beescape, which allows users to explore the stressors affecting bees in their own communities.

Other authors on the paper include Douglas Sponsler, postdoctoral scholar at Penn State, and Eric Lonsdorf, lead scientist at the Institute on the Environment, University of Minnesota.