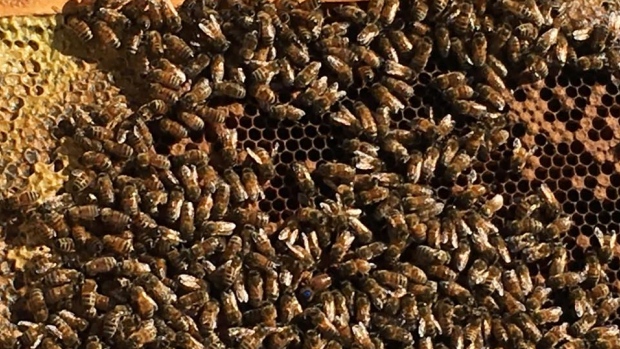 Moncton researchers are hoping honey bees could be a link to a new treatment for inflammatory diseases. (CBC)

University of Moncton researchers are buzzing over the possibility that honey bees could help them unlock a new treatment for inflammatory diseases, such as arthritis.

Dr. Luc Boudreau is leading the project, which explores the medical properties of a material called propolis, which is a resin collected from tree buds by honey bees.

Boudreau has identified a compound in propolis that reduces inflammation in laboratory tests.

He said the early tests conducted by his team are promising.

“When we did in-vitro tests, this compound is actually better than most compounds that are already out there on the market,” he said.

Boudreau and his three-person research team are awaiting approval from Health Canada before beginning clinical trials of their product. They are hoping to have approval in the next three months.

If the trials are a success, there is a growing market for the treatment.

Nearly 20 per cent of New Brunswick’s population is over the age of 64 and it is estimated that more than 125,000 people in the province suffer from arthritis.

Krista Phillips, the community education co-ordinator for the Arthritis Society, said the number of citizens living with arthritis is going to increase with an aging population.

“We’ll be watching this project very closely, with great interest because hopefully it leads to big things for people living with arthritis,” she said.

Boudreau’s research team was recently awarded $75,000 from the New Brunswick Innovation Foundation to go toward research into therapies for inflammatory diseases.

The researchers already have a company name, NaturoBee Ltd. and they’re looking for partnerships with investors and beekeepers across the province

They hope to have a product on store shelves in about three years.

Samuel Poirier, a graduate student is one of those researchers, said the economy can benefit from their work as well.

“Sometimes our options are limited for … especially in the field of science,  so by spinning off this company, we’re really hoping that we’re going to eventually manufacture products here, hire people to work with us and at the same time, create my own job,” he said.