A Perimeter Center office complex is the latest home to honeybee hives as part of a regional effort to rebuild a healthy honeybee population. The new bee hives are also contributing to the city of Dunwoody’s Bee City recent designation as a “Bee City” and its mission to support sustainable habitats for bees and other pollinators. 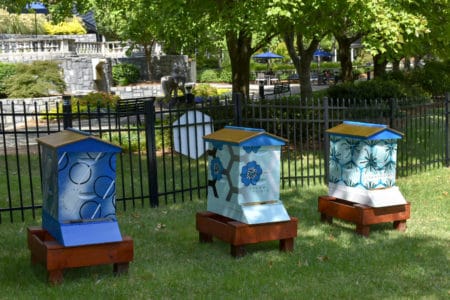 “It is great to see a local business so supportive of our efforts to maintain a healthy pollinator population,” said Dunwoody Nature Center Executive Director Michael Cowan in a press release.

The Bee Downtown Atlanta corridor is comprised of nearly 40 miles of healthy hives spanning south from Fayetteville to the newest site and most northern site at Crown Pointe, according to the release.

The bees at each location forage in a radius of up to three miles on average and impacting more than 18,000 acres, according to Bee Downtown.

“As more and more companies join the Bee Downtown initiative, the three-mile radius the bees from each hive fly begin to overlap, creating a connected corridor throughout the city,” the release said. “Since the hives are all maintained through the same expert management process, they act as a valuable control group for assessing environmental health in the cities where they are found.” 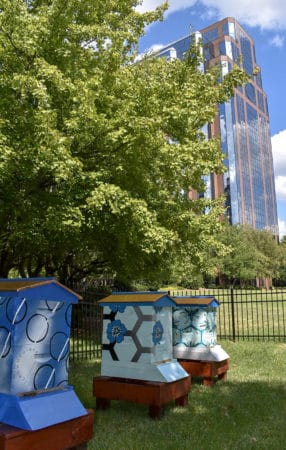 The honey bee hives with one of the Crowne Pointe office towers in the background. (Special)

The bees at Crowne Pointe are close enough to interact with the honey bee hives at the Dunwoody Nature Center, about 2.5 miles north of the Perimeter Center office campus.

“I was very happy to welcome the new hives at Crown Pointe to the growing network of hives in Dunwoody and even happier to learn that they are close enough to interact with the bees at the Dunwoody Nature Center,” Cowan said in the release.

“While I know all office and corporate campuses don’t have the room to host bee hives, we hope they will all consider planting native pollinator-friendly plants and refrain from using harmful pesticides that end up killing so many helpful pollinators,” he said.

Madison Marquette recently celebrated the installation of the bee hives with an event that included a ribbon cutting.

“We are extremely excited to initiate our partnership with Bee Downtown as part of our ongoing commitment to sustainability,” said Madison Marquette’s Julie Motsinger, executive vice president of Strategic Accounts.

Pollinators such as honey bees, butterflies, beetles and flies are crucial to the reproductive success of more than 75 percent of the world’s flowering plants, fruits, nuts and berries, according to the Dunwoody Nature Center.

U.S. honey bee populations are declining at an annual rate of 44 percent and more, according to the Nature Center. Dunwoody is one of more than 80 cities designated as a Bee City