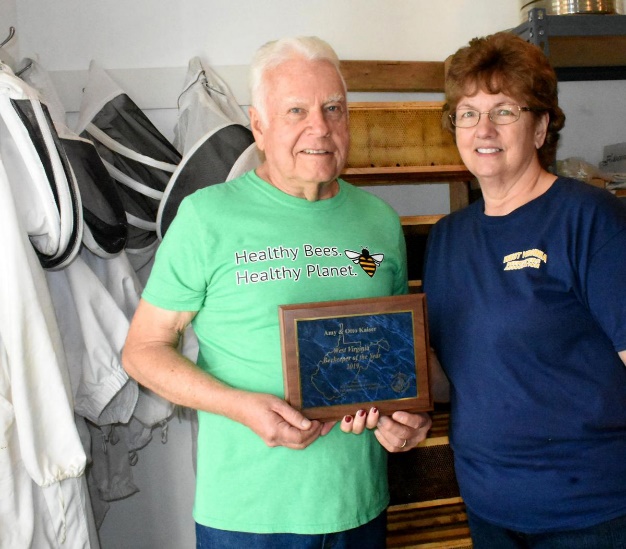 Otto and Amy Kaiser display their plaque they were awarded for being the West Virginia State Bee Keepers of the Year. 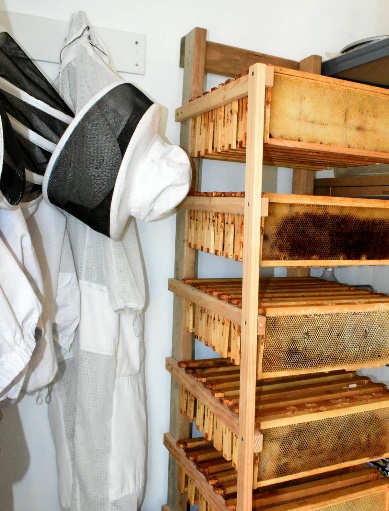 Frames hang on a rack that Otto Kaiser designed an built to store the frames when not needed in the hives.

MONUMENTAL — Evidence of Amy and Otto Kaiser’s love for honeybees can be found everywhere at their country home just outside Barrackville.

From their “Got Bees” license plate to their basement room where honey, beeswax and other bee-related items can be found, the beekeepers live a life devoted to the winged insects.

They have five hives in their backyard. On an unusually warm winter day Saturday, the bees were abuzz, flying around the hives as Amy and Otto watched.

Now, the husband and wife have been honored by the West Virginia Beekeepers Association with the WV Beekeeper of the Year 2019 award.

They were pleased to receive the award.

“We like the fact that it brings attention to beekeeping,” Amy said. “We’re trying to promote more and more people to keep bees because it’s good for the environment and the population needs to be maintained for pollinating.”

They were humble about receiving the award, having been nominated by the Marion County Beekeepers Association, where they are members.

“It’s a nice recognition, but there are others that are deserving of the same title,” Otto said.

Amy traces her fascination with bees back to her childhood interest in insects. When she was about 10 years old, she was involved in a year-long 4-H entomology project.

As an adult, she and Otto took a Beginning Beekeepers Course sponsored by the Marion County Beekeepers Association back in 2012. That spring, they started beekeeping.

Amy said she finds their hobby relaxing, though it can be exciting when the bees swarm.

She admires the tiny insects.

“They’re extremely intelligent creatures, and they work in harmony with one another,” she said. “Bees will sacrifice themselves for the hives.”

A hands-on individual, Otto has made various items to assist with their beekeeping, including a rack for the beehive frames.

They’re also experimenting with a windbreak for their beehives.

Amy said they lost all their bees the first year of their beekeeping, perhaps because the bees were too exposed. They have constructed a windbreak that encloses their beehives, and they’re hoping that it will protect the creatures.

She added that beekeeping can be challenging, with such threats to the bee population as the varroa mite. According to the West Virginia Extension Service, infestations of varroa mites, when left untreated, can kill bee colonies within one year.

On the administrative side, Amy served as the Marion County Beekeepers Association president from 2014 — 2016. Since 2016, she has been serving as treasurer. Together, Amy and Otto have mentored five new beekeepers and assembled an annual MCBA Directory for members to contact each other more easily. In addition, Otto is the MCBA Alternate Representative to the West Virginia Beekeepers Association Executive Board.

“They both are very committed to helping with the beekeeping association, and Amy really enjoys working with the bees,” Aretha Kees, a long-time member of the Marion County Beekeepers Association, said. “Otto helps her. They’re both very talented.” She felt they were very deserving of the award.

She said their mentoring of new beekeepers has been valuable.

“There’s a lot of things to know, and there’s a lot of factors that make beekeeping very difficult, especially for new beekeepers, because the mites often kill the bees if the beekeepers don’t how to treat for them,” she said.

Amy and Otto mentored Louisa Householder of Bridgeport as a beekeeper back in 2016. She has five beehives.

“It was valuable,” she said. “They’re willing to take their knowledge they’ve learned over the years and share it with new beekeepers.”

She said the most valuable thing that Amy and Otto taught was how to be a good beekeeper and keep things “basic and simple.”

She added that they also helped her pick up her first hive of bees in Pleasants County back in 2016 and bring them back to her house, which she said was very helpful.

Amy and Otto have made presentations to the Fairview Book Club, the Lifelong Learners of Pierpont Community and Technical College, and classes at Monongah Elementary School, Fairview Elementary School and Taylor County Middle School, as well as a homeschool group that meets at Trinity Assembly in Fairmont.

“It’s a fun challenge because once you start explaining bees or about the bees themselves, you’ve really a good captive audience at that time, and then it just goes off from there,” Otto said.

And like many beekeepers, Amy and Otto gather honey each year — 85 pounds this year. Otto said the members of their church are quick to snatch it up.

But it doesn’t cause them to lose sight of the bees’ important role.

“We enjoy the honey, but it’s not the main thing bees do, it’s the pollination,” Otto said. “Otherwise, our food sources will just dwindle down to nothing.”

Beekeeper of the Year