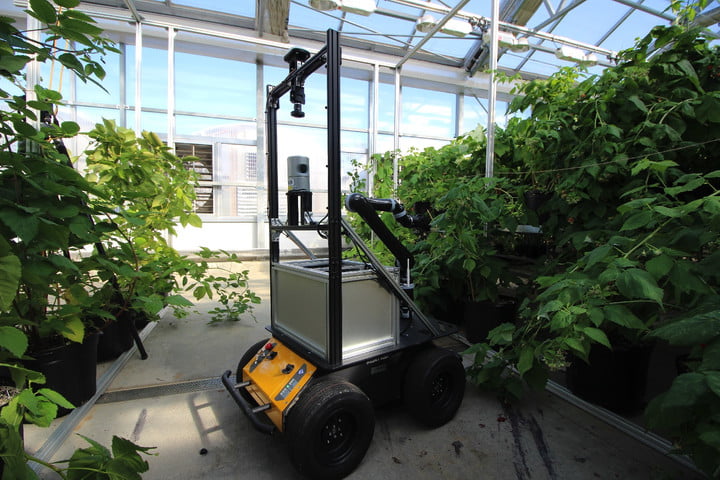 Honeybee populations are declining. This poses a significant threat to agriculture, the economy, and pretty much life as we know it, due to bees’ crucial role as some of the natural world’s best pollinators. Could robots help?

That’s what researchers from West Virginia University (WVU) have been working to answer, via a new autonomous, bee-inspired robot that is designed to pollinate bramble plants — primarily blackberries and raspberries — in greenhouse environments. Its name: BrambleBee.

Unlike some of the nature-inspired, biomimetic robots we’ve written about in the past, BrambleBee doesn’t look too much like its buzzy namesake. It’s a ground-based robot equipped with a robotic arm, boasting a custom-designed pollination end-effector tip. It looks more like the kind of robot you might expect to find in Amazon’s warehouses, picking out your orders, than a next-gen pollinator. But that doesn’t mean it can’t do the job.

“BrambleBee works by first driving around the greenhouse to perform an inspection pass, where it uses its Lidar and cameras to map the environment and the locations of detected flowers,” Nick Ohi, one of the researchers on the project, told Digital Trends. “After that, it then uses the mapped flower locations to autonomously plan and execute the pollination pass.”

This involves working out the optimal route to individual flowers, parking up, and then deploying its robot arm to carry out the pollination process. This is achieved by using the small brushes on its end-effector to transfer pollen from the anthers to the pistils of the bramble flowers. The task requires incredibly precise motion and gentle application so as to prevent damaging the flowers.

At this stage in the project, Ohi acknowledged that BrambleBee is not as fast or efficient as bees in performing this task — although this is to be expected at the current stage in development. Once the techniques have been fully tested, the researchers will work to increase speed and efficiency.

“We expect the real benefit of this kind of system to be realized when many of them are deployed in very large greenhouses or farm fields and are capable of pollinating entire farms on their own,” Ohi said.

Yu Gu, an associate professor of Mechanical Engineering at WVU, was keen to stress that this is not a project designed to replace bees. “BrambleBee can be seen as a backup plan in case there would be a bee shortage in the future, or work in places that bees are not applicable, [such as] inside greenhouse or in space,” Gu stated.