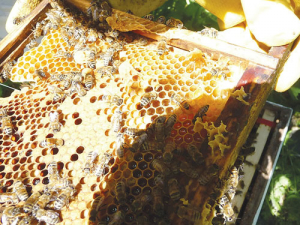 The bee and honey industry group ApiCulture NZ is proposing a commodity levy to support producers, but the idea is controversial: many beekeepers strongly oppose it.

Levy talks are going on NZ-wide and a formal vote is planned for mid-October; opponents believe it could be a close call.

The plan is to levy beekeepers 10 cents/kg on their honey at the point of extraction from the hive.  Hobby beekeepers and honey packers would be exempt.

Commercial beekeepers are raising their voices in opposition.

“The levy, seen as a tax on honey, would just be unfair,” Pimm says.  “Some producers of high-quality manuka honey are still commanding high prices. But most producers of other honeys are facing falling prices in a crowded and increasingly competitive market. Proportionally, non-manuka producers will pay a lot more than the lucky ones.”

“Many beekeepers will find this tax hard to pay. It seems unfair that packers, marketing firms and hobbyists beekeepers would all get to participate in the benefits of ApiCulture NZ’s work – even setting policy on the use of the levy – without paying.”

Other beekeepers see a conflict of interest in the proposed levy. They say non-beekeeper businesses that buy bulk product off beekeepers could get to influence policy affecting their suppliers.

NZ Beekeeping has told Agriculture Minister Damien O’Connor of its concerns that levy money would be used to fund unnecessary research and that administrative cost estimates are ‘optimistic’.

“The proposed use of funds is either unconnected to the concerns of potential levy payers, and/or would be duplicating existing provision by the government or commercial enterprises,” it said in a letter.

“We simply disbelieve the extraordinarily low administrative budget proposed by Apiculture NZ. The proposal is seriously flawed and not at all in the interests of potential levy payers.”

Russell Berry, the immediate past president of NZ Beekeeping, says it’s become a “matter of trust”.

“Commercial beekeepers aren’t opposed to a well-managed, fair and well-targeted levy,” he says.  “But beekeepers tell us they just don’t trust ApiCulture NZ to manage a levy effectively and fairly.  We agree with them and that’s why we’re opposing the levy.”

Berry says so far the mood in consultation meetings has been mixed, with a lot of opposition being voiced.

He believes the real issue facing beekeeping is biosecurity — the risk of further exotic bee pests and diseases entering NZ.

“Such an incursion would affect pollination and honey production; and MPI estimates pollination of pasture and horticultural crops by bees at over $6 billion of value each year,” Berry says.

“Yet even the management plan for American foulbrood (AFB), an endemic disease we know we can defeat with diligent bee husbandry, has run into problems.

“The management agency — ApiCulture NZ — has been unable to get beekeepers to manage their hives well enough to defeat the disease.  We don’t think ApiCulture NZ is competent to manage large levy programmes, on this basis.”

NZ Beekeeping says it has long called for a formal review of the management agency for AFB and believes the management of AFB by ApiCulture NZ has been a failure.