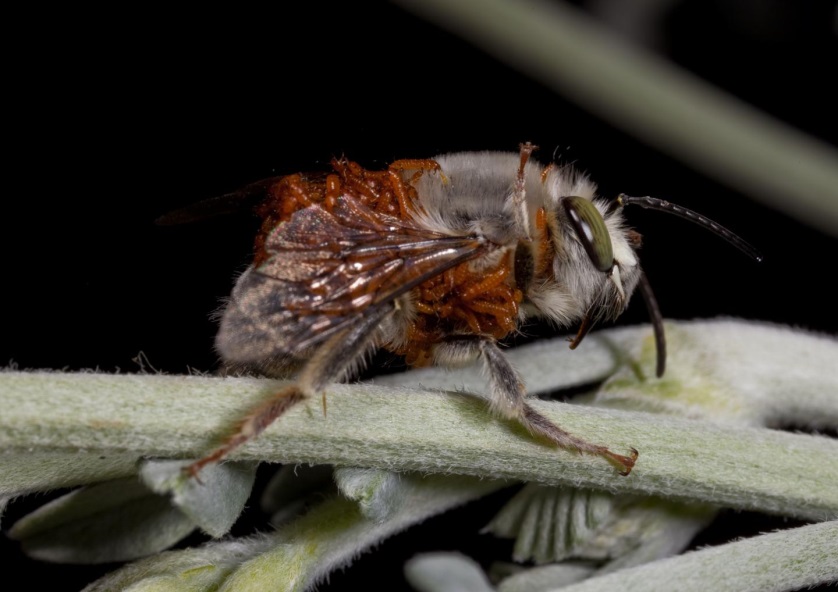 A beetle that tricks bees into carrying it into their nests where it can live off their pollen, nectar and eggs adapts its deceptions to local hosts, according to research by Leslie Saul-Gershenz, a graduate student in entomology at UC Davis.

Aggregations of the larvae of Meloe franciscanus beetles lure male digger bees (genus Habropoda) with chemical signals that mimic female sex pheromones. The larvae, also known as triungulins, attach themselves to males, transfer to female bees during copulation and hitch a ride back to the nest, where they feed on bee eggs and provisions and emerge as adult beetles the following winter.

The beetles parasitize related but geographically separate species of bees, Habropoda pallida from California’s Mojave Desert and H. miserabilis from the coastal dunes of Oregon. Saul-Gershenz wanted to know more about how the beetles adapt to their hosts.

“Male bees of both species were more attracted to local parasite larvae than larvae from the distant locale because the larvae tailored their pheromone-mimicking blends to the pheromones of their local hosts,” Saul-Gershenz said. “Additionally, the larval aggregation adapted their perching height at each location to the patrolling height of local male bees.”

The study represents a fascinating case study of relatively rapid evolution via local adaptation of a parasite species to different hosts, said co-author Jocelyn Millar, distinguished professor in the Departments of Entomology and of Chemistry at UC Riverside. Other collaborators included J. Steven McElfresh of UC Riverside and Neal Williams of UC Davis.

Insects are particularly reliant on chemical signals – their sense of smell – to locate mates of their own species. There are a number of examples of predators and parasites tapping into, mimicking or otherwise exploiting these signals. At the same time, as signals evolve, they help to establish reproductive isolation of closely related species from each other. In this case, the parasites’ chemical signals are diverging along with their host species.

Despite their freeloading lifestyle, Meloe blister beetles have turned out to be engaging research subjects, said Saul-Gershenz,.

“The larvae cooperate with their siblings for a brief period; they mimic the pheromone of their hosts; they are locally adapted to different hosts both chemically and behaviorally; and their emergence times are plastic across their geographic range. It has been fantastic to unravel this species’ puzzle,” she said.

Winter Quarters, January 1, 1917 Dear Sis; We have just had a funny experience that I must tell you about, while I wait for…