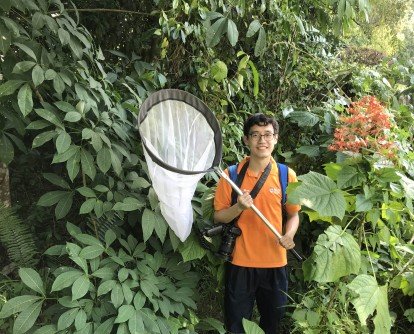 Mr Ming-Kai Tan, a PhD student from the NUS Department of Biological Sciences, is a key member of a research team which has discovered that orthopterans, such as grasshoppers and crickets, visit flowers more frequently than previously known, and they pollinate the flowers they visit.

Newswise — Orthopterans like grasshoppers and crickets are widely recognised as agricultural pests as they eat and destroy food crops. However, their tropical relatives provide a valuable service to plants by serving as pollinators, according to a study led by biologists from the National University of Singapore (NUS).

“When people think of pollinators, bees and butterflies are usually the first that come to mind. There are very few records of orthopterans that visit flowers, and none of the studies involve Southeast Asian orthopterans,” said Mr Ming-Kai Tan, a PhD student from the Department of Biological Sciences at the NUS Faculty of Science, who is the first author of the research paper.

Mr Tan and his colleagues conducted surveys in five Southeast Asian countries and discovered that orthopterans visit flowers more frequently than previously known, and they pollinate the flowers they visit. The results were published in the Journal of Orthoptera Research in November 2017.

“Given that more orthopteran species are being discovered in this region, there is a pressing need to better understand the biological roles they play, particularly when they visit flowering plants, and how they contribute pollination services for urban plants and agricultural crops,” added Mr Tan, who has discovered over 60 species of orthopterans new to science since 2009.

Pollination is crucial for plant reproduction and supply of food crops for human consumption. As many Southeast Asian countries rely on agriculture as the main source of economic growth, baseline information on flower-visitors are useful in identifying orthopterans that are potential pests, and those that may potentially be pollinators.

“Without such studies, it is not possible to assess the risks presented by these potential pest species, as well as to further examine the beneficial roles of the flower-visiting orthopterans,” explained project supervisor Associate Professor Hugh Tan, who is also from the NUS Department of Biological Sciences.

To better understand the roles that orthopterans play in pollination ecology, the research team conducted field surveys across different vegetation and localities in Singapore, Malaysia, Thailand, Brunei Darussalam and Indonesia between 2015 and 2018. The study involved both day and night surveys during which flower-visiting orthopterans were searched and recorded using photographs and videos.

The team recorded 140 incidences of orthopterans visiting flowers across the sites surveyed, among which 41 orthopteran species were recorded to visit flowers of 35 plant species. Out of the 41 species, 19 species were katydids, 13 were grasshoppers, and nine were crickets.

The study, which is the first documentation of flowering-visiting orthopterans in Southeast Asia, and is the most extensive one for the tropics, was carried out in collaboration with researchers from the Thailand Institute of Scientific and Technological Research, Universiti Brunei Darussalam, Universiti Sains Malaysia and University of Malaya.

Among flower-visiting orthopterans, adults and nymphs of the sickle-bearing katydid Phaneroptera brevis were frequently found among flowers in Southeast Asia.

To examine how the feeding behaviour of P. brevis contributes to pollination, the research team observed how P. brevis feeds on the flowers of the Hairy Beggarticks Bidens pilosa L. (Asteraceae), a tropical to warm temperate North and South American plant which grows in grasslands and scrublands close to urban areas in Singapore.

Close observation of the video recordings showed that the sickle-bearing katydid fed on the flowers without damaging the parts of the flowers by gently collecting the pollen grains. Pollen grains attached to the antennae and legs of the katydid facilitated pollination.

The team also conducted experiments in which the flowers were exposed to the katydids, and allowed to develop into seeds. Researchers found that the chance of these flowers producing seeds was about three times higher. These results were published in the journal Ecology (The Scientific Naturalist) on 29 April 2018.