Researchers discover honey bees have more than one way to feed on nectar
By: Bob Yirka – Phys.org 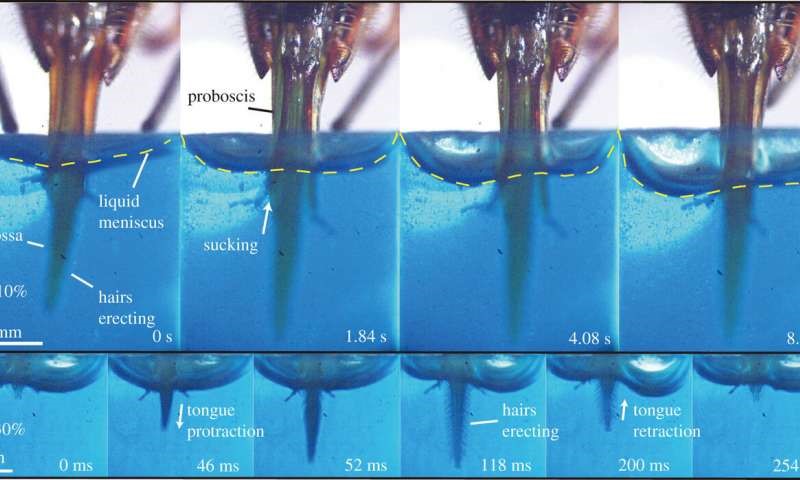 A team of researchers from Sun Yat-Sen University, Kiel University, and the University of Washington has found that honeybees have more than one way to feed on nectar. In their paper published in the journal Biology Letters, the group describes their study of honeybees and the way they eat.

For over a century, scientists have believed that honeybees have just one way to feed on nectar. After landing on a flower, they extend their tongue into the nectar source. Thousands of bristles then become erect, creating an ideal environment for trapping nectar. Each of the bristles reaches into the nectar at just the right angle to create holding spaces between them. The tongue is then retracted back into the proboscis. A pumping mechanism extracts the liquid from the tongue. This maneuver is repeated until the nectar runs out or the bee becomes sated. In this new effort, the researchers have found that honeybees take another approach on occasion.

The researchers studied honeybees up close using very high-speed cameras as they fed on artificial nectar in their lab. They discovered that sometimes, the honeybees switched to a different approach, and they did so depending on the viscosity of their food source. They found that when the nectar was more watery, the honeybees would suck the liquid directly from the source instead of lapping it up—a faster and more efficient way of consuming a less sugar-rich liquid. And they appeared able to do so by using the same sucking mechanism that they used to remove thicker nectar when lapping.

The researchers suggest their findings reveal how honeybees are able to feed on such a wide variety of flowers, unlike most other bees, which are restricted to just a few. Honeybees, they suggest, can change tactics depending on which sort of nectar they find. They also discovered that honeybees are capable of changing feeding habits mid-stream. If a nectar grows thicker as the honeybee is feeding, it can simply switch to lapping. The researchers also suggest their findings could have implications for studies looking to understand increases in colony collapse disorder.