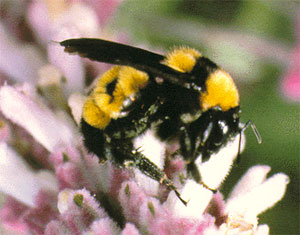 CALGARY, AB – Researchers from the University of Calgary and University of Ottawa have made an astonishing find when it comes to the habitat range of bumble bees, and the results are troubling.

Findings to be published in the Journal Science demonstrate that climate change is having a significant impact on bumblebee species in North America and Europe.

“Bumblebees are losing vital habitat in the southern regions of North America and Europe, which is cause for concern but another pressing issue is that bumblebee species generally haven’t expanded north,” explains Paul Galpern, Assistant Professor of Landscape Ecology in the Faculty of Environmental Design, University of Calgary, co-author of study.

“Climate change may be making things too hot for them in the south, but is not pulling them north as expected,” says Galpern.

For many wildlife species, when climate warms, they expand into areas that used to be too cold for them, pushing into areas that are closer to the North Pole in response. Bumblebee species are experiencing a different fate and being held at the northern most range while losing ground rapidly in the south.

“Picture a vice, now picture the bumble bee habitat in the middle of the vice,” says Jeremy Kerr, Professor and University Research Chair in Macroecology and Conservation, University of Ottawa and lead researcher of the study. “As the climate warms, bumblebee species are being crushed as the ‘climate vice’ compresses their geographical ranges. The result is widespread, rapid declines of pollinators across continents, effects that are not due to pesticide use or habitat loss. It looks like it’s just too hot.”

It is this revelation that is the most concerning because a very important piece of the ecological puzzle is under threat.

“Bumblebee species play critical roles as wild pollinators, not just for crops but of all sorts of plants,” says Galpern. “They provide an important service to ecosystems. They help plants produce fruits, seeds and this in turn provides both food and habitat for other animals, and so on.”

With nearly half a million observations compiled from museum collections and citizen scientist collectors from North America and Europe over the last century, this rich historical record enabled researchers to track thirty one bumblebee species in North America and thirty-six in Europe.

“We don’t know for sure what is causing a stagnation at the northern end of things. Bees should be able to start new colonies in places they did not historically occupy. But we don’t know why this is happening so slowly that it looks like the ranges are not moving at all,” says Galpern. “This all points to the fact that bumble b ees are at risk, and the services that they provide are increasingly threated by human-caused climate change.”