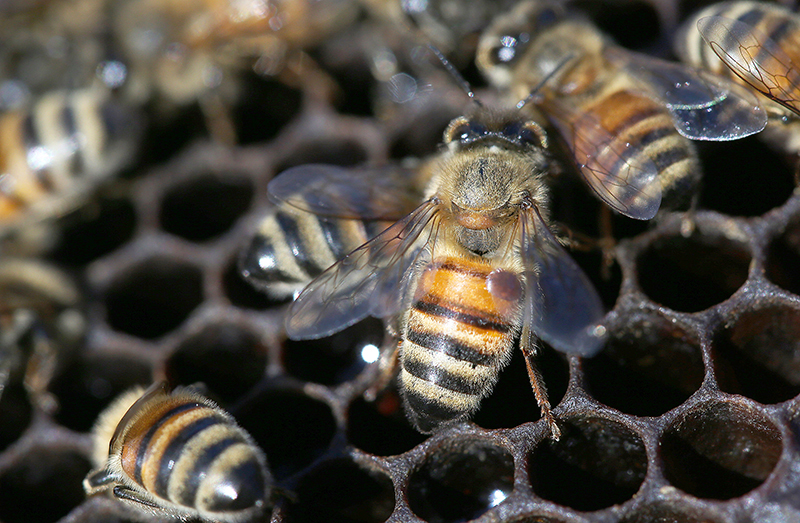 Varroa mites are considered the biggest bee health problem worldwide. Here, a Varroa mite has latched on to the upper-right side of a honeybee’s abdomen to feed. (Purdue Agriculture/Tom Campbell)

Researchers found that some populations of Varroa jacobsoni mites are shifting from feeding and reproducing on Asian honey bees, their preferred host, to European honey bees, the primary species used for crop pollination and honey production worldwide. To bee researchers, it’s a grimly familiar story: V. destructor made the same host leap at least 60 years ago, spreading rapidly to become the most important global health threat to European honeybees.

While host-switching V. jacobsoni mites have not been found outside of Papua New Guinea, Purdue researchers Gladys Andino and Greg Hunt say vigilance is needed to protect European honeybees worldwide from further risk.

“This could represent a real threat,” said Andino, a bioinformatics specialist with Information Technology at Purdue. “If this mite gets out of control and spreads, we might have another situation like V. destructor.”

Varroa mites are obligate parasites, meaning their lifecycle is inextricably entwined with that of their bee hosts. The mites can do serious damage to their hosts’ health due to their relatively large size – “think of a tick as big as your fist,” Hunt said. Mites latch on to bees and feed on their hemolymph, insects’ rough equivalent to blood, leaving behind open wounds that are susceptible to infection. They can also transmit diseases such as deformed wing virus and have been linked to colony collapse disorder.

To gain insight into the biology behind V. jacobsoni‘s host switch, Andino and Hunt, professor of behavioral genetics and honeybee specialist, studied the differences in gene expression between V. jacobsoni mites that fed and reproduced on Asian honeybees and those that parasitized European honeybees. Knowing which host cues mites respond to and the genes involved could lead to potential control strategies, the researchers said.

“If we can understand the mechanism, we might be able to disrupt, block or manipulate that,” Andino said. “But first we have to understand what is happening and which genes are involved in allowing the mites to shift to a new host.”

Andino and Hunt sequenced and assembled the first V. jacobsoni transcriptome, a catalog of all of the proteins made by an organism that shows which genes are actively being expressed. They then used the transcriptome to compare gene expression in populations of V. jacobsoni.

They found 287 differentially expressed genes between the mite populations that only parasitized Asian honeybees and those that successfully fed and reproduced on European honeybees. A change in gene expression is often a sign that an organism is reacting to a change in its environment – in this case, a new host species.

Of these 287 genes, 91 percent were up-regulated in the host-switching mites. Many of these genes were related to stress responses, “which makes sense,” Andino said.

“If you’re feeding on a new host, you’re going to be stressed. You have to adapt. The food is different and might not be optimal for development,” she said. “Potentially, European honeybees are not fulfilling the requirements these mites are used to getting from Asian honeybees.”

Some genes involved in reproduction and egg production were overexpressed while some genes linked to digestion genes showed reduced expression, compared with the same genes in V. jacobsoni mites that exclusively parasitized Asian honeybees.

Catching the host transition in its early stages will allow researchers to continue to investigate the complex genetic details behind the shift and monitor infected European honeybees, Hunt said.

“This happened once with one species of mite, and it looks like it’s happening again. Maybe if we catch this as it’s beginning, we’ll be able to figure out why it’s happening or, down the road, stop it.”

Results: We sequenced and assembled a de novo transcriptome of V. jacobsoni. We also performed a differential gene expression analysis contrasting biological replicates of V. jacobsoni populations that differ in their ability to reproduce on A. mellifera. Using the edgeR, EBSeq and DESeq R packages for differential gene expression analysis, we found 287 differentially expressed genes (FDR ≤ 0.05), of which 91% were up-regulated in mites reproducing on A. mellifera. In addition, mites found reproducing on A. mellifera showed substantially more variation in expression among replicates. We searched for orthologous genes in public databases and were able to associate 100 of these 287 differentially expressed genes with a functional description.

Conclusions: There is differential gene expression between the two mite groups, with more variation in gene expression among mites that were able to reproduce on A. mellifera. A small set of genes showed reduced expression in mites on the A. mellifera host, including putative transcription factors and digestive tract developmental genes. The vast majority of differentially expressed genes were up-regulated in this host. This gene set showed enrichment for genes associated with mitochondrial respiratory function and apoptosis, suggesting that mites on this host may be experiencing higher stress, and may be less optimally adapted to parasitize it. Some genes involved in reproduction and oogenesis were also overexpressed, which should be further studied in regards to this host shift.