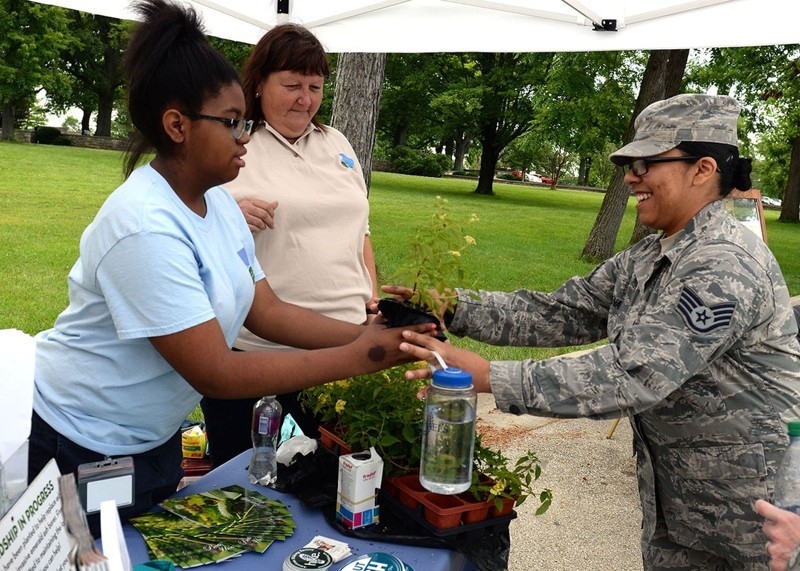 Hundreds of base personnel and members of the public were buzzing about the same thing at the Wright Brothers Memorial June 21 – Wright-Patterson Air Force Base’s status as the first military installation nationwide to be declared a “Bee City USA.”

Bees, also known as pollinators, are vital to the pollination process of a third of the food people consume such as fruits, vegetables and nuts. Due to disease, lack of land to forage on and exposures to pesticides, during the last few decades there has been a significant decline in the bee population.

Wright-Patt has partnered with Propolis Projects, a local non-profit organization committed to re-establishing vigorous populations of pollinators in Ohio. One hundred acres of Huffman Prairie now hosts a quarter million bees – or nine colonies. In upcoming weeks two of the colonies will be moved to an isolated area on base so they can expand.

Rebecca Westlake, 88th Air Base Wing vice director, initiated the base’s move toward becoming a certified Bee City USA after attending the city of Vandalia’s ceremony several months ago and realizing how “pollinator conscious” the base already is. She kicked off the event by reading a resolution declaring the base’s new standing.

“We are thrilled to have the support of base leadership and such extensive local collaboration for this initiative, and ultimately our goal is to encourage other installations to take the same measures we are to protect pollinator species,” said Danielle Trevino, natural resources technician and event coordinator. “Many installations are already doing most of the work necessary to be designated, but the Bee City USA designation really aids in fostering awareness about the role pollinators play and the decline they are experiencing. Military bases can potentially play a large role in ensuring the vitality of pollinators.”

On hand to join in the celebration was Bee City USA founder and executive director Phyllis Stiles of Asheville, North Carolina. Her husband, Richard, started beekeeping several years ago and invited his wife to work with him. She became passionate about pollinators and founded the organization in 2012, and it has spread to 30-some states.

“What’s going on at this base and across the state is absolutely astonishing,” Stiles said. “People are taking steps to reverse pollinator decline in whatever way they can. … What’s happening at Wright-Patterson Air Force Base is awe-inspiring. Thank you for what you are doing.”

Planting a variety of plants native to Ohio, like milkweed, letting at least parts of lawns and yards include clover and flowers and avoiding the use of insecticides, fungicides and herbicides are things everyone can do to help pollinators, she said.

Stiles said the expo and Wright-Patterson AFB’s new status were exciting because they are “a call to action – putting up our antennae and putting up with the little critters that keep our world lush and green. This will become an inspiration for bases all across the country, neighbors in Ohio, visitors who come here and the people who live on this base. When they start to notice all the things you are doing for the pollinators and hear this good news, they might think differently about how they landscape in the future.”

Ranger Ryan Qualls from the Dayton Aviation Heritage National Historical Park and the site manager for the Huffman Prairie Interpretive Center, said, “We’re one of very few national park sites that operate within a U.S. Air Force installation. This is an important outreach event to connect the public with what is a very large problem that we’re experiencing in the loss of bee habitat and the issue of colony collapse.”

The six-site park will host its own hive at the Wright Cycle Company and Visitors Center in downtown Dayton in several weeks. While the “Taj MaHive” will be situated away from the public, it will be able to be viewed via webcam online at www.nps.gov/daav. Ranger Craig Campbell is managing the project in collaboration with the Propolis Projects and said he hopes to recruit citizen scientists to assist.

For additional information on Bee City USA and how to help, go online to beecityusa.org.