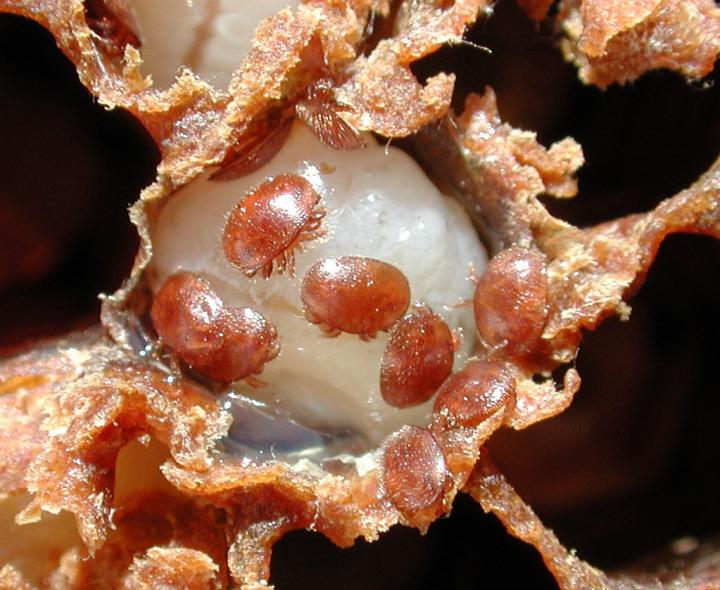 EAST LANSING, Mich. — New insights into the reproductive secrets of one of the world’s tiniest and most destructive parasites – the Varroa mite – has scientists edging closer to regulating them.

“If you know your enemies better, you can come up with new ways of controlling them,” said Michigan State University entomologist Zachary Huang, whose research explores the fertility of the notorious mite, a pest that is devastating honeybee populations worldwide. The mite sucks the blood of honey bees and transmits deadly viruses.

The Varroa mite’s lifecycle consists of two phases: one where they feed on adult bees, called the phoretic phase, and a reproductive phase that takes place within a sealed honeycomb cell, where the mites lay eggs on a developing bee larva.

The MSU-led study, published in the current issue of Scientific Reports, shows that the mites clearly prefer to infest adult bees at mid-age, or during the nurse phase of a bee’s lifecycle when they take care of larvae, rather than during the younger (newly-emerged) or older (forager) phases of an adult bee. The study also found that the physiological type of a host bee had significant effects on the mite’s reproductive fitness and success later on.

Mites chose bees in the nurse phase of their lifecycle – the nutritional prime of bee life – over their older and younger counterparts at significantly higher rates. Also, those who fed on nurses had the highest reproductive success rates and the lowest infertility rates.

Previous studies have shown that the mites can easily choose their reproductive hosts, but Huang’s study shows that they can go one step further: the mites can correctly pick the most nutritious bees to suck blood from.

“This might seem very smart for the mites because they do not realize the reproductive advantage right away, but under natural selection this is rather easy to achieve.” Huang said. “The mites who made the correct choice will have more babies and their genes will become more dominant over time.”

The recent results have helped researchers zero in on mite reproductive and nutritional preferences and are a significant step in understanding the mysterious, parasitic relationship between the Varroa mite and the honey bee.

“This is an important step in understanding mite reproductive biology,” Huang said. “We can utilize this information as a step toward finding ways to regulate them.”

In future research, Huang will look to identify what precise factors the mites are relying on for their reproductive success.

“If they require a certain factor to have babies we can regulate that factor without affecting the bees – only the mites – and reduce their reproduction,” Huang said. “Instead of killing them with a chemical, this could eventually lead to a more natural way of mite control and a better outlook for honeybees.”