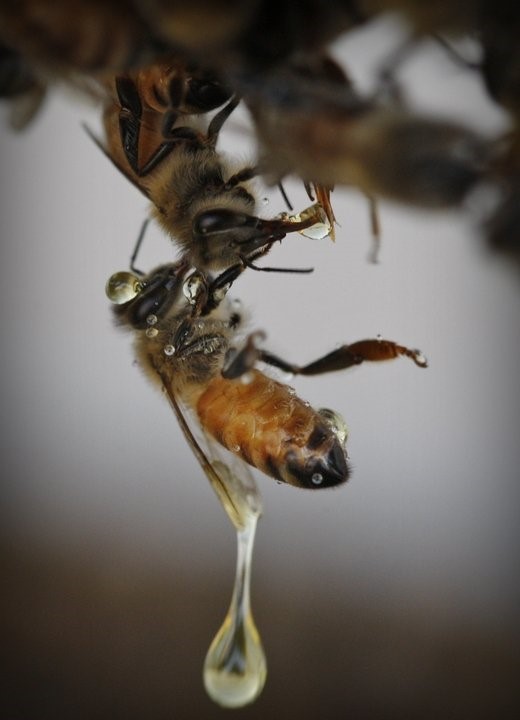 Bees have turned out to be an unexpected casualty in the fight against Zika virus. After Dorchester County, South Carolina, dispensed a pesticide by plane Sunday targeting potential Zika-carrying mosquitoes, honey bees started dropping dead by the thousands. At one bee farm in Summerville, South Carolina, 46 hives containing a total of about 2.5 million bees died almost immediately after the area was sprayed.

County officials insist they gave residents plenty of heads up, but beekeepers say they did not have adequate notice to shield their hives from the insecticide, which is “highly toxic to bees,” The Washington Post reported. “They passed right over the trees three times,” said beekeeper Juanita Stanley, describing an eerie silence in the farm’s usual buzzing after the plane had gone by. She added: “My bee yard looks like it’s been nuked.” Becca Stanek

But Then, Dorchester County apologizes after millions of honey bees killed by mosquito spraying

Dorchester County officials apologized Tuesday for unintentionally killing millions of honeybees when it failed to notify local beekeepers about its mosquito spraying over the weekend.

“Dorchester County is aware that some beekeepers in the area that was sprayed on Sunday lost their beehives,” County Administrator Jason Ward said Tuesday. “I am not pleased that so many bees were killed.”

Dorchester County officials apologized Tuesday for unintentionally killing millions of honeybees when it failed to notify local beekeepers about its mosquito-spraying operation last Sunday.On Friday, when four travel-related cases of the Zika virus were confirmed in the Summerville area, according to the state Department of Health and Environmental Control, the county announced plans to spray for mosquitoes over the town between 6:30 and 8:30 a.m. Sunday. It was the first time the county sprayed from the air, officials said.

The Summerville fire captain was at work when he spotted the plane flying over.

“My wife called a short time after the flyover and said, ‘We have a mass killing,’ ” he said. “ ‘We have thousands and thousands of bees dead all around our pool deck and our driveway, just everywhere.’ ”

The county usually sprays for mosquitoes by truck from 9 p.m. to 5 a.m. weekdays, Ward said.

“I am not aware of any other situations where bees, humans or pets were harmed,” he said. “We usually call registered beekeepers prior to spraying in their zone.”

But this time, Dorchester officials failed to alert them, Ward said.

“I can assure you that having a better relationship with the beekeeping community is paramount in avoiding this type of situation,” he said.

Flowertown Bee Farm and Supply on Pinehurst Avenue, lost more than 2.3 million insects from 46 hives, according to co-owner Juanita Stanley.

“My bee yard looks like it’s been nuked,” she said.

Flowertown Bee is Stanley’s income and passion, she said. She often holds workshops and teaches others how to raise bees.

“It’s not about the honey. It’s about saving the bees,” she said. “Because of my mission with my business, this is so much more devastating. I am trying to do the opposite of what just happened. They are in a sanctuary where I can protect them, and now they are destroyed.”

She doesn’t know what, if anything, can be salvaged, she said.

“I don’t know where to go from here,” Stanley said. “I can’t just go out and buy more bees, and right now I’m focused on how do I clean up all this mess? What can be reused and what can’t? What steps do I take?”

Dorchester County issued a statement saying aerial spraying will help reduce the mosquito population, which has increased after a year that brought historic rains and floods, a mild winter, and extreme heat and humidity over the summer. Such spraying allows officials to target areas that cannot be addressed with ground spraying and larval control alone, according to a county press release.

Dorchester County used an insecticide called Naled, which has been registered for use in the U.S. since 1959 and is used primarily for controlling adult mosquitoes, according to the U.S. Environmental Protection Agency.

Naled can be used for mosquito control without posing risks to people, and would be effective in controlling mosquitoes carrying Zika and other diseases, according to the EPA.

To protect bees, the EPA suggests spraying between dusk and dawn, while bees are not typically foraging. It also says beekeepers can reduce exposure by covering colonies, preventing bees from exiting colonies during treatment periods, or relocating hives to an untreated site.

People who are sensitive to chemicals, those with pre-existing respiratory problems and anyone especially concerned about exposure to pesticides can take the following steps to help reduce exposure:

Stay indoors with the windows closed during spraying.

If you are outdoors during spraying operations and you can see the spray, avoid contact with it. If you can’t avoid contact, rinse your skin and eyes with water.

Wash fruits and vegetables from your garden before storing, cooking or eating.

Cover outside items like furniture and grills while the spraying is occurring. Bring pets and items like pet food dishes and children’s toys indoors. Rinse any items left uncovered outside before using.

If you think you have had a reaction to the mosquito spray, talk to your doctor or call the regional Poison Control Center at 1-800-222-1222.