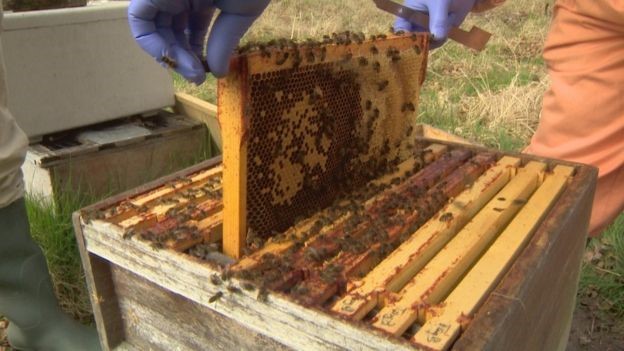 The imported bees are more readily available but carry a greater risk of bringing in disease from the Varroa mite.

A new group, the Scottish Native Honey Bee Society, has been formed to help protect the indigenous species.

It aims to convince more keepers to convert their colonies to native bees.

Experts say the Apis mellifera mellifera are hardier than other species which makes them more suitable to a Scottish climate.

The imported bees are more readily available but carry a greater risk of bringing in disease from the Varroa mite.

They also risk cross-breeding with the native species creating hybrids.

Beekeeper Gavin Ramsay said: “Scottish native honey bees are a brown bee with a reputation for frugality which helps them withstand even the dreichest of Scottish weather.”

“But, like the Scottish Wildcat, it has been getting increasingly difficult to find good pure examples and if we don’t take action to reverse their decline we may see them disappear.”

It is estimated there are about 3,000 beekeepers in Scotland and the hobby has been increasing in popularity.

The new organization wants to raise awareness of the native bee’s importance and encourage government to help secure their survival.

It also aims to encourage conservation, maintenance and breeding.

Beekeepers are seen as vital for the survival of the insects with very few colonies surviving without human protection.

They are commonly used in areas such as Tayside to aid pollination in the fruit sector.

Dr Ewan Campbell, a biologist specializing in bee disease at the University of Aberdeen, said: “We want to raise awareness that there is a native honey bee in Scotland and that there is value in its conservation.

“Disease and hybridization are putting the native honey bee in real trouble here.

“We know, thanks to modern genetics and morphology, that small pockets of native honey bees do still cling on in some parts of Scotland, but for how long?”