By Isa Soares for The Diplomat 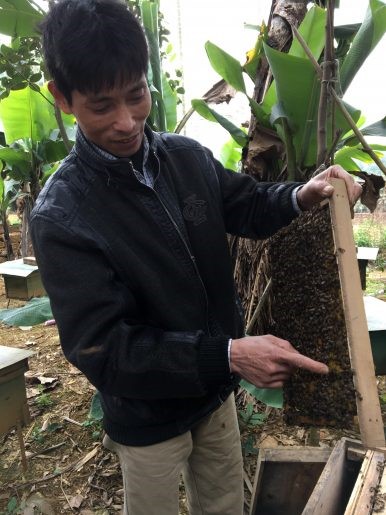 Scientists have argued that honeybees literally work themselves to death. They’re such busy bees in fact, that their work ethic puts us humans to shame. They travel many miles to forage, working tirelessly throughout the day and often into the night. They are somewhat workaholic and we should be grateful for their dedication. That’s because the plants they pollinate, in such a crucial and efficient manner, account for what’s estimated to be a third of all the food we eat.

Clearly, we depend on them. And they depend on flowers. But these flowers are not blooming as much as they used to — serving up less pollen and nectar — and that’s partly because of climate change.  CNN’s Eco Solutions team traveled to Hanoi in Vietnam, one of Asia’s largest honey exporters, to see for ourselves the impact climate change is having on the bees there, and what is being done to increase the rapidly declining bee population. What we saw was startling.

Climate change has made Vietnam’s dry seasons longer and droughts more prolonged. This has forced beekeepers to move their hives more regularly to get the most from their Asian honey bees. In 2014, 35,000 colonies were recorded in Vietnam, but since then, they’ve noticed a 20 percent decrease in the number of beekeepers in the country. Nguyen Thi Hang, vice-president and general secretary of the Vietnam Beekeepers’ Association, explains why that is:

First, the international price of honey was dramatically down in the last two years so small beekeepers could not get benefit enough for their investments so they just gave up beekeeping. Second, due to climate change, drought and flood are present in several parts of the country that affect phenology of plants. Because of drought, some bee plants have much fewer flowers; others have flowers but without or with a very tiny drop of nectar that do not provide enough food for bees. Floods swept many beehives away and many small farmers were unable to restart.

To combat this, Hanoi’s Bee Research and Development Center has been closely studying the bees’ life cycle, hoping it will help shed light on what can be done to protect the bees during the harshest conditions, in particular in times of drought. Research is still at the early stages but Han Duc Pham tells us that the indigenous Asian honey bee works better with scattered and limited resources, compared to its European counterpart, because its working hours are longer. This research is critical to Vietnam and its roughly 35,000 beekeepers, who depend on bees for their livelihoods. It’s a career, says Nguyen Thi Hang, that pays off; “The investment is very low — the benefit is very high,” she says.

The government is all too aware of this and has set up initiatives to restore natural ecosystems, including those on agricultural land. It has issued new laws to conserve endangered species; it has also set up national parks and conservation areas to protect wild life. Local NGOs are going further: training farmers and teaching them about the bees’ food chain and the importance of conservation, as well as encouraging them to plant more plants and flowers. In the North West of Vietnam in Moc Chau for example, beekeepers are planting more sweet canola (rapeseed oil crop), which blooms for relatively long periods and produces high amounts of nectar. Ultimately, a mutually beneficial relationship for bee and flower…and beekeeper.