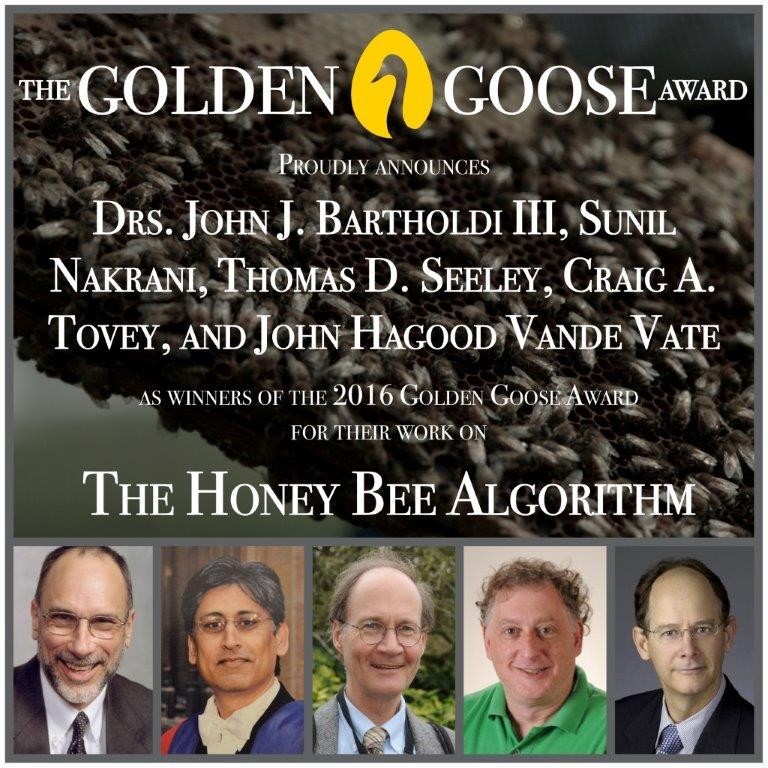 Internet users have the honey bees and the research team that studied them to thank the next time a webpage loads up smoothly.

Five scientists mapped the complex system honey bee colonies apply when foraging for nectar to feed the colony, and transformed the bees’ procedures into a mathematical tool that now streamlines internet services across the globe.

The work has earned the scientists – four Georgia Tech engineers, and a Cornell University biologist – the Golden Goose Award, which recognizes federally funded basic research that has had significant impact, according to a 14 Sept. announcement by AAAS and the other organizations that established the award.

The research of honey bee foraging behaviors led to the development of the “Honey Bee Algorithm”  (read the story here http://www.goldengooseaward.org/awardees/honey-bee-algorithm)  that major web-hosting companies are using to keep internet services running efficiently – an innovation that has increased revenues for the companies in a global market worth more than $50 billion.

John J. Bartholdi III, Sunil Nakrani, Thomas D. Seeley, Craig A. Tovey, and John Hagood Vande Vate will be formally presented the award along with two other teams at the fifth annual Golden Goose ceremony at the Library of Congress on Sept. 22. The recipients of the two other awards were announced earlier this year.

The research, funded by the National Science Foundation and Office of Naval Research, was inspired by a National Public Radio interview of Cornell biologist Seeley in which he described his honey bee research. Vande Vate, one of the Georgia Tech engineers, was listening, and afterward quipped to his colleagues Bartholdi and Tovey: “I wonder if the bees would do any better if they hired us as consultants?” The joke set the systems engineers off on a years-long quest to better understand the decentralized foraging patterns of honey bees.

“The internet is one of mankind’s greatest accomplishments, and these scientists studied one of the smallest parts of nature to make it better,” said Rep. Jim Cooper (D-TN), who conceived the award. “Their ingenuity is the kind of talent that makes America’s scientific and research community the best in the world.”

A coalition of business, university, and scientific organizations founded the Golden Goose Award in 2012 to celebrate the often unexpected impacts of federally funded research. And it serves as a counterpoint to other efforts in Congress to deride basic scientific research as wasteful spending – the late Sen. William Proxmire (D-WI) and his Golden Fleece Award foremost among them.

The federal government remains the leading source of research funding nationally, and provides a majority of funding for basic research, according to Matt Hourihan, director of AAAS’ R&D Budget and Policy Program. While Congress is scrambling to complete work on a stopgap funding bill before breaking for the Nov. 8 elections, it appears on track to provide a more than $1 billion increase for research funding, Hourihan added.

The group studied just how honey bees distribute foragers among varying flower beds, and still gather enough food of high quality and accomplish the task efficiently. More than a decade later, engineers Tovey and Nakrani took that basic research and developed the “Honey Bee Algorithm” for shared web servers that must respond to ever-changing internet traffic. The algorithm performs up to 20 percent more efficiently than others and distributes web transactions more smoothly and quickly for users.

The engineers and Seeley developed the mathematical model for honey bee foraging behavior over almost three years before testing it against a real honey bee colony at the Cranberry Lake Biological Station in upstate New York. There, Tovey and Seeley set up a controlled experiment that tracked 4,000 individually labeled forager bees as they moved to and from artificial nectar sources. The experiment confirmed the model, showing that the bees had evolved to distribute themselves in such a way that each forager bee gathers nectar at roughly the same rate over time to ensure the hive has sufficient nectar resources despite the vagaries of the flower beds.

Bartholdi, Tovey, and Vande Vate have continued exploring how nature’s self-organizing systems can be applied to human problems since their foray into honey bee behavior more than two decades ago. Tovey, in particular, sought to apply the work on honey bee foraging patterns to a variety of problems, but it wasn’t until then graduate student Nakrani walked into his office in 2002 talking about web-hosting servers that he settled on the perfect application.

In web-hosting, servers preform like nectar foraging bees. Clients asking to use the servers – internet shoppers for example – mimic the changing landscape of flower patches, and they each have something to give: clients put up money while the flowers provide nectar.

Shared web-hosting servers operate by switching from one application to the next, based on demand for any given application. Each server, for security reasons, can run only one application at a time, so switching applications – like honey bees dispatched to a richer flower bed – requires down time and incurs a revenue penalty as the server shifts and loads a new application. The ideal algorithm adjusts to rapidly changing internet demand and delivers the maximum total revenue – just like honey bee colonies foraging for nectar.

Major web-hosting companies use Tovey and Nakrani’s “Honey Bee Algorithm” to boost revenues and more efficiently allocate their servers. Internet users have the honey bees and the research team that studied them to thank the next time a webpage loads up smoothly.