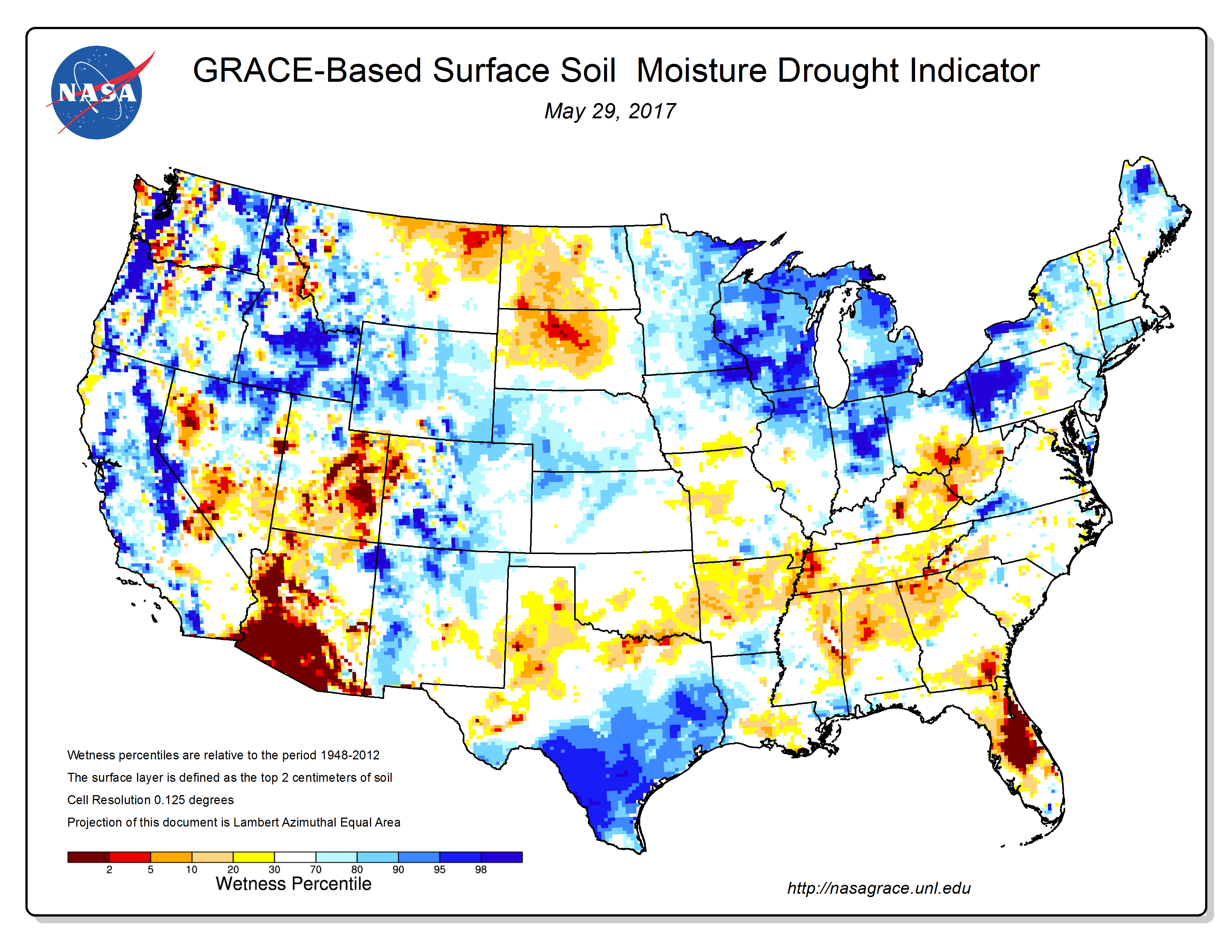 Not so long ago, California was in the middle of a deep drought but in June its snow water equivalent rose to a heaping 170 percent of normal. NASA shows in its latest video that satellites were capturing that change. – NASA Earth Observatory

The House in July will tackle the question, which for years has triggered a tug-of-war between growers and environmentalists. It plans to vote on a Republican-authored plan aimed at sending more of northern California’s water to the Central Valley farmers who say they badly need it.

But California’s two U.S. senators, both Democrats, vow to block the bill in that chamber, saying it would bypass environmental safeguards and override state law. Gov. Jerry Brown also opposes the bill.

The bill, said Sen. Kamala Harris, D-Calif., in an interview, “does not strike the right balance because there’s no reason that we have to accept a false choice and somehow weaken the Endangered Species Act in order to be smarter with water policy.”

As far as we can tell, if this thing were to become law it would probably be the end of salmon in California.

In the middle of this political brawl are growers who have long felt that the state’s water policies prioritize fish over farms. Surplus water is allowed to flow out into the Pacific Ocean in order to protect the ecosystems of fish like salmon and steelhead. They want it flowing to their land instead.

“Our water supply has been dramatically reduced in recent years and it’s critically important for our country that we have the capability to grow safe, affordable, nutritious food, and without water it’s just not possible,” said William Bourdeau, executive vice president of Harris Farms in Fresno County.

Farmers say they have seen almost no water from the north due to the severe drought which has recently ended. Bourdeau said the problem is not entirely nature’s fault and that the state’s water policies have created a “regulatory drought.”

Ryan Jacobsen, CEO of the Fresno County Farm Bureau, a nonprofit agricultural group, said “even in dry years, Mother Nature provides water in California,” but that farmers often don’t see a drop due to regulations.

“The current system is broken and this bill continues to step in the right direction of trying to secure a more reliable water future for this area,” Jacobsen said.

Fishing interests see a very different kind of threat: The bill, they say, would be a death sentence for their industry.

“As far as we can tell, if this thing were to become law it would probably be the end of salmon in California,” said John McManus, executive director of the Golden Gate Salmon Association, a nonprofit Petaluma-based group that represents sport and commercial fishermen.

McManus said diverting more water to agriculture would end up hurting people as well as fish.

“These are fish that provide a livelihood for people up and down the coast and in the Central Valley,” he said.

So does farming, maintained Bourdeau.

Under the legislation sponsored by Rep. David Valadao, R-Calif., the delivery of water to the Central Valley would no longer have to comply with some of the more stringent environmental rules stemming from the Endangered Species Act.

It goes beyond last year’s compromise water bill, the WIIN Act, by modifying the 1992 Central Valley Project Improvement Act to move more water to agriculture. It also streamlines the regulatory process for water storage projects and could put the brakes on the hard-foughtSan Joaquin River restoration settlement.

It’s a radical assault on states’ rights and the health of California’s rivers.

Doug Obegi, a senior attorney with the Natural Resources Defense Council, a non-profit, in San Francisco, said the bill would “dismantle most of the environmental safeguards protecting California’s rivers and wildlife.”

Bourdeau said of those concerns, “I think that we are smart enough and innovative enough to solve both problems.” He added that California farms are some of the most eco-friendly in the world and that if farm production is forced to shift out of the state, that could end up being worse for the environment.

The bill, which is backed by House Majority Leader Kevin McCarthy, R-Calif., has one Democratic co-sponsor, Rep. Jim Costa, D-Calif., and is expected to pass the House.

Costa said the bill was “no silver bullet to solving the San Joaquin Valley’s long-term water supply imbalance” and that he has some concerns, but wanted to continue to find some compromise.

The biggest challenge comes in the Senate. Previous attempts to pass similar legislation have stalled there, but a few things are different now. Sen. Barbara Boxer, D-Calif., who was vehemently opposed to the WIIN Act, has retired, and a Republican is now in the White House.

But both Sen. Dianne Feinstein, D-Calif., and Boxer’s replacement, Harris, are arguing the bill would “pre-empt” the state laws governing the environment and water rights and give the Trump administration more control over California water.

Harris said there is a need to “diversify” water policy to include underground storage, desalination, conservation and recycling, and drip water irrigation.

Feinstein said she is “strongly opposed” to the bill and that money from the WIIN Act should be used for additional water storage and better desalination systems to move ocean water to the Central Valley.

“There are now tools to use, and we need to use those tools,” Feinstein said in an interview.

by Tom Davidson Okay, fine, call me nutbag-crazy. But I’m here to tell you that tanging does, indeed work. It’s not just for breakfast…