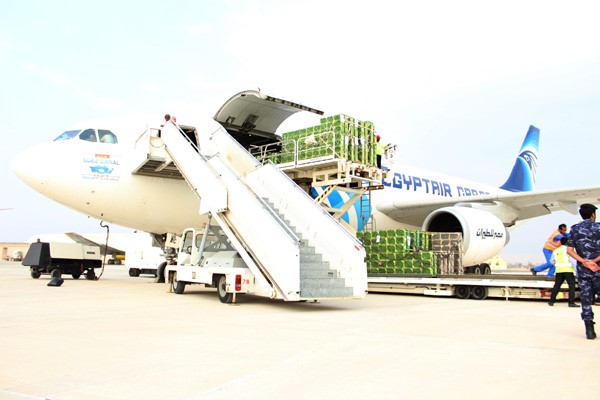 The inaugural Egyptair Cargo freighter touched down at Ras Al Khaimah International Airport at 3:45pm yesterday, carrying about 60 million honey bees from Cairo, destined for farms across the UAE.

As well as being a very traditional industry, honey production in the country has seen huge growth over the past five years. Over 1,800 tonnes of honey is now being exported on an annual basis to those with a taste for the world’s original and natural sweetener.

The inaugural flight was welcomed by Eng. Sheikh Salem Bin Sultan Al Qasimi, the chairman of Ras Al Khaimah International Airport and Department of Civil Aviation. He said: “RAK Airport is ideally positioned to handle this precious cargo and we are grateful to Egyptair Cargo and Al Najeh Honey & Bees Trading to give us the opportunity to demonstrate our capabilities in this regard.  We also appreciate all the support provided by the Ministry of Environment and Climate Change, RAK Customs and other authorities.”

His Excellency expressed his gratitude to His Highness Sheikh Saud Bin Saqr Al Qasimi, Member of the Supreme Council of the UAE and Ruler of Ras Al Khaimah, for his continued support to RAK Airport.

The bees themselves were part of a re-stocking exercise that takes place regularly, and have to be handled with great care. Mohammed Al Najeh, who runs the operation and heads Najeh Honey and Bees Trading explained that the exercise of getting the bees from Egypt is one that has to run like clockwork to avoid disaster. The flight timing is chosen so that the bees arrive after the fierce midday heat and are met immediately by the 30 customers who pick them up and head back to the farms. Inside the aircraft the temperature is set to -15 degrees Celsius in order to offset the high temperatures that the mass of bees create.

Najeh’s operations are so cutting edge within the industry that last week Philip McCabe, president of Apimondia, the world beekeeping federation, visited the UAE in order to learn about the process. McCabe also met with Dr. Thani Ahmed Al Zeyoudi, minister of Climate Change and Environment, whose ministry has given strong support to the UAE’s honey industry.

Egyptair Cargo country manager Sherif Sabry said: “Egyptair Cargo is a specialist and one of the leading airlines in the transportation of live bees and we are happy to fly them to RAK Airport as a new route on our network from Cairo.”

RAK Airport chief executive officer Mohammed Qazi added: “We have been planning this operation for many months and our goal is simply to become the leader in the industry to deliver complete operational excellence for handling live bees. Our infrastructure is best suited for such operations and we will ensure we continue to improve and surpass our already established high standards. We believe what Al Najeh is doing for the industry is quite revolutionary, and we are pleased to be part of his high ambitions. UAE could become a regional leader in bee farming and organic honey production, and we believe RAK Airport could play a crucial part in that process.”

RAK Airport’s recent announcements included the early start of its winter charters from various countries in Europe, CIS and Russia, and the management has continued to deliver RAK Airport’s growth trajectory amid a challenging economic climate. – TradeArabia News Service