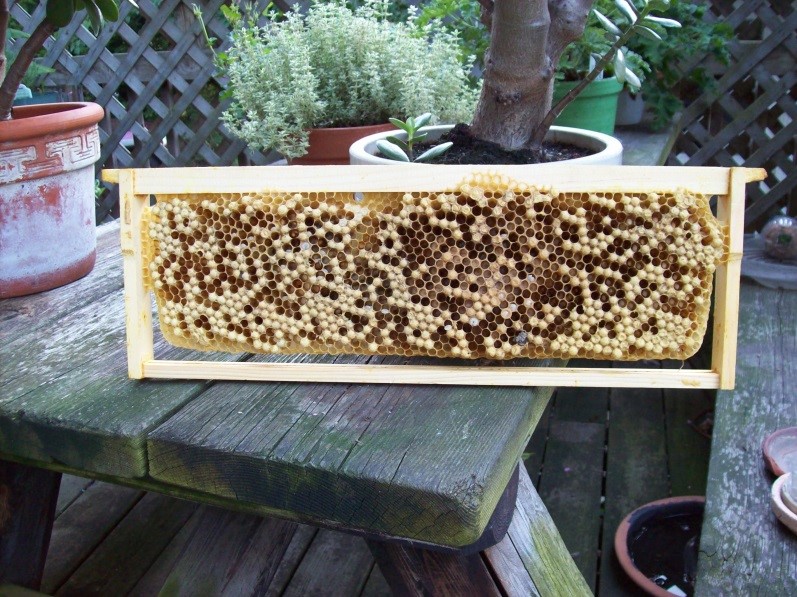 By Taryn Phaneuf in Civil Eats

On a hot evening in June, Washington State University (WSU) entomologist Brandon Hopkins sat in front of a microscope in Orland, California, handling one honeybee after another as each committed one of life’s most important acts. Hopkins squeezed one drone at a time, contracting the male’s abdominal muscles to mimic a natural mating event. As the pressure exposed the drone’s penis and a speck of semen, Hopkins vacuumed it off carefully. “You do that hundreds and hundreds of times as quickly as possible,” he said.

The process is much more technical than the actual reproductive rituals of bees (which usually happen in mid-air), but the outcome is the same: The drone gives his life, and the species lives on. Rather than immediately contributing to the growth of the colony, however, this bee’s semen will be stored in liquid nitrogen and shipped to another state.

Hopkins is collecting the first-ever honeybee samples to deposit into the National Animal Germplasm Program, a national livestock gene bank run by the Agricultural Research Service (ARS), the main research arm of the U.S. Department of Agriculture (USDA). The bank contains the genetic material of approximately 31,000 species that have been deemed agriculturally important in the United States.

Housed in Fort Collins, Colorado, the repository began in 1957 as a seed library, but in 1999, the ARS started collecting the genetic material of animals used for food or fiber as well, including various kinds of beef cattle, freshwater fish, yaks, and bison. Researchers selecting for certain traits, or breeders trying to introduce greater variability to their stock, can draw from the ever-growing gene bank. And, in the event of catastrophic disease or man-made extinction, the library’s stock could be used to rebuild a population.

For the rest of this story, head over to Civil Eats by clicking http://civileats.com/2016/11/02/a-new-sperm-bank-for-honeybees-could-save-agriculture/