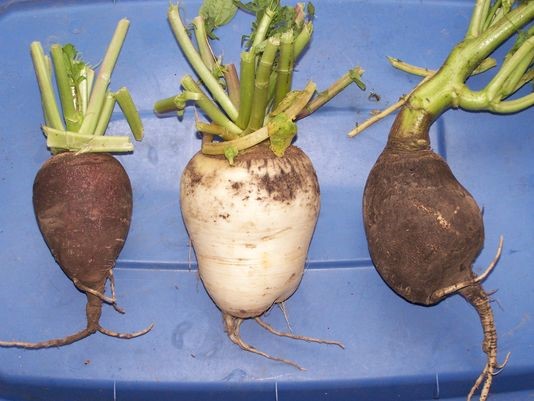 I’m referring to my experience with cross-pollinated radish that began about eight years ago. I, along with the honey bees, have been enjoying the results ever since.

It all started when I left several varieties of radish grow to bloom stage and cross-pollinate — perhaps even courtesy of some bees in that first season. The radish included red and white varieties typically grown in the early season and the late season Spanish winter radish (the black-skinned bulbs that can grow up to grapefruit size or larger).

After a couple of years, there was lots of cross-pollination but some of the self-perpetuating radish plants were still close to their original trait of having a red, white, or black-skinned bulb. The prize ones — both in color and taste — have a mix of purple, red, and white skin (somewhat resembling a rutabaga).

The best way to eat these radishes, which are the size of an orange or larger, is to slice them and make a sandwich using buttered rye bread with seeds. A single radish can make 6-7 sandwiches. Another good thing about those special cross-pollinated radishes is that they store for several months inside plastic bags in a refrigerator.

My cross-pollinated radish have two distinct growing seasons, both of which grow to produce enough foliage to provide a soil canopy that deters erosion and preserves moisture. They start growing fairly early in the spring, seldom develop bulbs and then break into bloom as early as late May or certainly in June in Wisconsin, depending on the growing season.

And what’s so wonderful is how those mostly white flowers attract the honey bees. There will be more of them on those flowers than on anything else they have to choose from at the time. Hearing the humming of the bees as I walk near the blooming radish is a wonderful early summer sound.

The next step is to wait until early August for the seeds to be ripe (pods are brown and seeds are dry). On their own, the seed pods will fall to the ground and break open, allowing the seeds to grow.

But allowing that to happen will result in crowding that will not allow the radish to develop bulbs. Instead, take the pods and rub/shake the seeds out on the soil surface so the resulting growth won’t be too dense. Raking will also help with seed to soil contact for good germination.

The resulting late summer and early autumn growth provides nice bulbs for the most part. They’re ready for harvest by mid-September and into November.

Whatever seed didn’t germinate in mid to late summer or that stayed secure in later ripening pods grows on its own the next spring. An alternative is to store some pods over the winter and then spread the seeds on the soil in the early spring.

It’s not every year that I plant new radish seed — the typical varieties — in the spring. With some new ground to use this year, I gave it a try.

Once again, the results were very disappointing on the promised 21, and 37 day harvest time for the Cherry Belle, watermelon and German Giant varieties respectively. It’s possible that none of the varieties developed bulbs because they were shaded for too much of the day.

What’s also probable is that the weather was too dark and gloomy for several days in early June this year when the bulbs should have developed. Instead, the plants went to seed because they were directed by nature to reproduce in response to the weather at the time.

The same thing happened about seven or eight years ago when there was an even longer gray, gloomy period during the first two weeks of June. A gardener about 6 miles away from my radish planting had the same experience that year.

I’m hoping that the three varieties which quickly went into bloom late this spring cross-pollinated. As of late September, the new plants were growing and a few bulbs were developing, but they still had many more weeks of the growing season to answer my uncertainties.

To try what I’ve done, pick a spot where you don’t plan to be growing anything else. Be sure to grow some of the Spanish winter radish as a cross-pollinator and don’t expect any edible radish from the spring growth.

If nothing else, do it for the sake of the bees. I continue to be fascinated by what I’ve observe every year as the bees appear on the early summer blossoms.